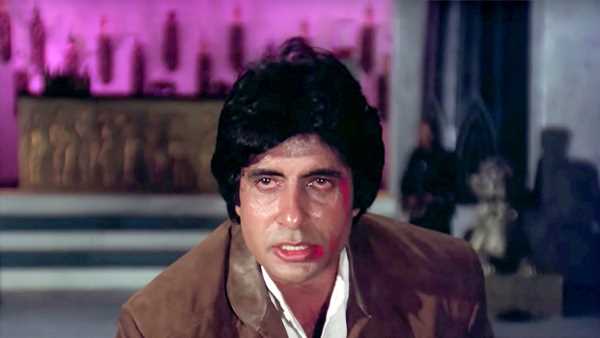 One of Amitabh Bachchan’s oldest friends, actor-director Tinnu Anand has seen a side to the superstar that very few have.

“In 1988, he gave me a Rolex watch with 52 diamonds in it. I had to return it because that watch was an anniversary present from Jaya to him and he would have gotten into trouble if Jaya saw it,” Tinnu tells Rediff.com Contributor Sameena Razzaq.

I met Amit in Calcutta for the premiere of Sanjog, which did not do very well.

He had invited me for that premiere because he knew I was in town, and he met me warmly.

Then we lost touch because Amit had become very busy as an actor while I was still assisting Mr Satyajit Ray.

A few years later, my brother Bittu and his friend got together to make a film.

Rishi Kapoor’s Bobby had released and he had become big.

Rishi and my brother were very close, so he told him, why don’t you ask Tinnu to direct the film.

So I narrated the script of Duniya Meri Jeb Mein to Rishi and he loved it. Rishi asked who the other brother would be, and Bittu said we are planning to take Amitabh.

When I met Amitabh, he was packing to go to Bangalore for Sholay.

He said, let me get back, then I will hear the script. If the script is good, we will work together.

I was trying to get a break then, and I told my brother what Amit said.

When Rishi heard that, he was jumping with joy that he would be working with Amitabh Bachchan.

But at a party at the Sun-n-Sand hotel, Cameraman Sudarshan Nag told Rishi that he would be an idiot to say yes to the script, as Amitabh would steal every scene.

It wasn’t true. But the next day, Rishi said he could not work in our film.

My brother was making the film because Rishi said he would work for free. So we dropped the idea of going to Amitabh; Rishi insisted we take his uncle Shashi Kapoor (instead of Amitabh).

The film took five years to get made.

While I was making Duniya Meri Jeb Mein, I had a 10 month-gap because Shashi and Rishi were busy, so I utilised that time to get Kaalia ready.

I didn’t have much money then.

A producer named Iqbal Singh, who was very close to Dharmendra, asked me if I had a story for Dharmendra.

I had Kaalia. I was taken to Dharmendra for a narration.

I am a very ferocious narrator; I do some action while narrating.

Dharmendra was getting a massage done. I said I would will wait till he finished.

It was very odd for me. There is a scene where Kaalia gets violent.

I was doing a bit of action while narrating it and Dharmendra was watching me. At the end of the narration, Dharamji said you should become an actor, Tinnu.

I started laughing, but he was serious.

Then Iqbal got an idea and said, why don’t you approach Amitabh for Kaalia?

Narrating that script to Amitabh took me a year.

He said okay, but you will have to wait.

He said he could not give me more than two hours a day for a year.

The iconic dialogue of Kaalia 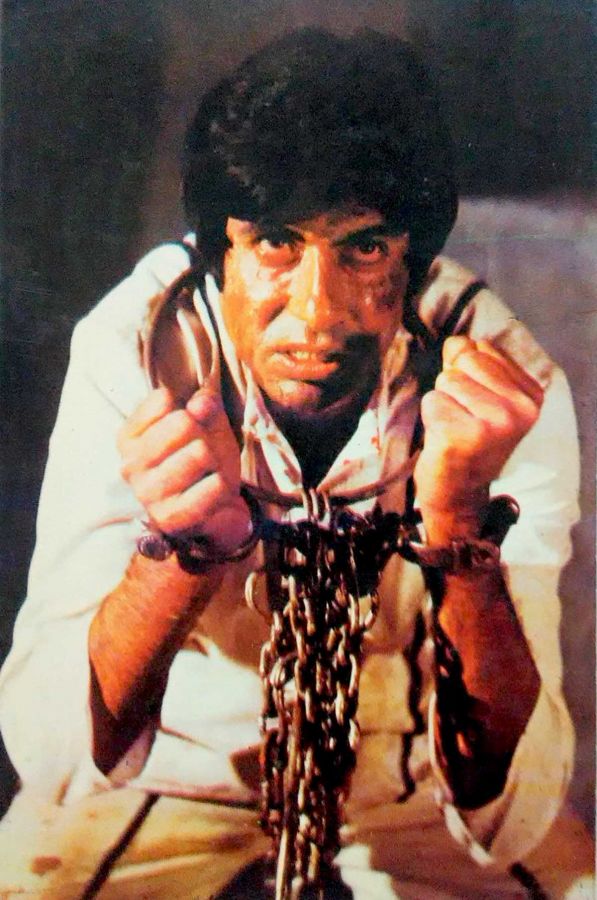 Amitabh always says, did we ever imagine the dialogues of Kaalia and Shahenshah to become so iconic?

Dialogues of both these films were written by my father Inder Raj Anand.

He is very strict about the words he wrote. They had to be spoken the way he had written it.

In Kaalia, there was a party scene where Amit is getting engaged to Parveen Babi and Pransaab comes to meet him. Pransaab says, your future is either my prison or the gallows; you are that kind of criminal.

Now this is when the problem started.

There were around 200 people on the sets, as it was a party scene.

Amitabh tells me, yaar, what is this reply to Pransaab, yeh dialogue nikaal do.

I said Dad had written it, bolna toh padega.

Amitabh started saying the dialogue. He said it twice.

When he said it the third time, a voice came from behind the camera: ‘Theek se kahiye, janaab, theek se.’

We turned around to see my father.

This was a direct reference to his father, Harivansh Rai Bachchansaab.

Amitabh asked for 10 minutes and walked away.

I thought he would quit, but he was rehearsing the lines.

When he came back, he spoke those lines beautifully, and with conviction.

How the Shahenshah costume was made 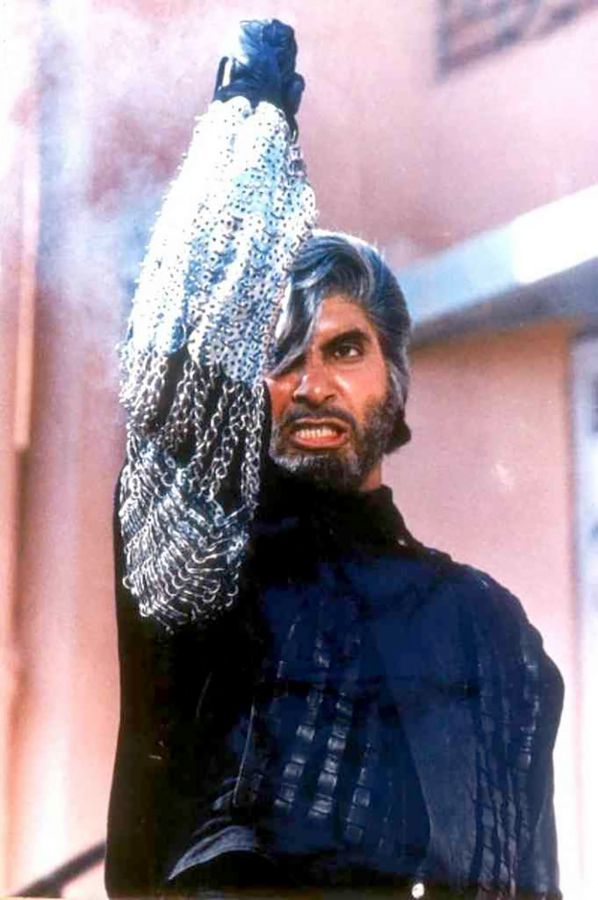 Before we started Shahenshah, Amit had to be treated for myasthenia gravis.

I was called to his office and told by his brother that he will not be working in films till further notice.

I had already recorded three songs and my unit was ready to leave for Bangalore for the shoot.

When the news spread that Amitabh won’t be working in films, financers lined up outside my house.

I had designed a special black jacket without an arm, black leather pants and a rope around his shoulder for the film. That suit was designed by Akbar (Shahpurwala), who would design all of Amit’s clothes, but it was given to Jeetendra to wear in a film.

I was angry and heartbroken because Shahenshah hadn’t been officially dropped and the costume was already given away.

After a year-and-a-half, Amit came back and completed his films like Mard and Aakhree Raasta.

Then he told me that he would give us dates for my film.

He asked me about the costume. I said, your designer Akbar had given the costume to Jeetendra, and that I would not work with him.

This gave Amit a shock because Akbar had been designing all his clothes so far.

I said I would take Kishore Bajaj.

Kishore went to Crawford market (south Mumbai) to look for steel ingots to place in the arm. When the suit was ready, we flew to Madras to show it to Amit.

It was difficult for him to wear that, having just come out of myasthenia gravis.

But he was impressed with the costume.

‘During Major Saab, he gifted me a gold watch worth Rs 40 lakh’ 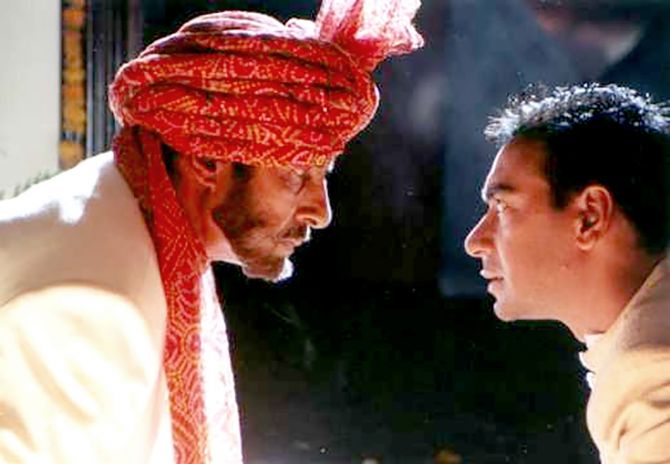 I had never heard of Rolex or Corum watches, but Amit has flooded me with them.

That Corum watch was worth around Rs 15 to Rs 17 lakh at that time!

I had to return it because that watch was an anniversary present from Jaya to him and he would have gotten into trouble if Jaya saw it.

Later, he replaced it with a Pierre Cardin watch.

During Major Saab, he gifted me a gold watch worth Rs 40 lakh.

Apart from 23 watches, he has also gifted me with sunglasses and perfumes. 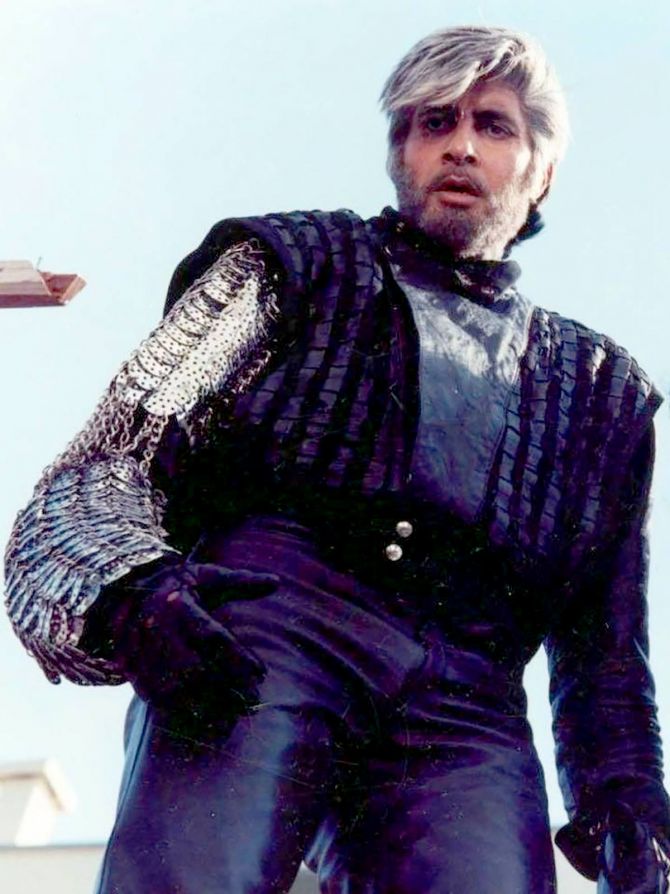 ABCL was almost bankrupt, Amit’s house was mortgaged, and he was going through hell.

We had started Major Saab and had a 55-day schedule in Pune.

On the very first day of the shoot, I had got into an argument with Amit as I could not make this film because of the financial restraints.

I started crying in front of him.

He put his hand on my shoulder and said Tinnu, trust me, I will make this film.

Knowing him, and knowing his spirit, a fighter coming out of the Coolie accident, coming out of myasthenia gravis, there is nothing that can stop him.

And sure enough, he completed Major Saab. 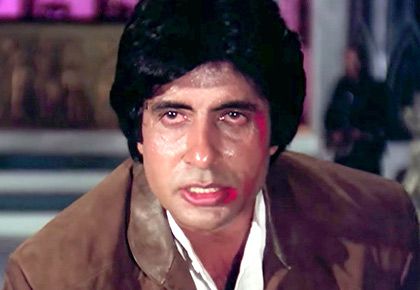