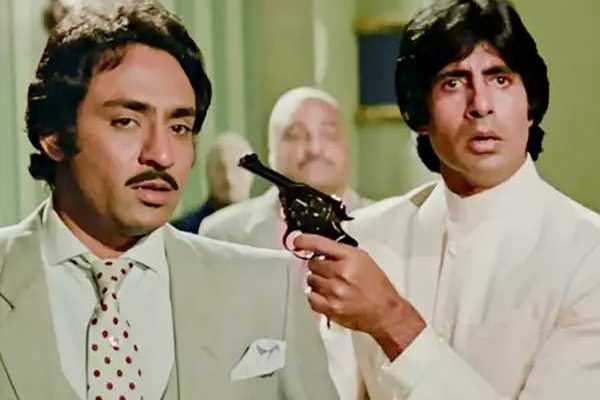 ‘He wrote a letter to his parents every night, and read the Gita every morning before going about his work.’

On Amitabh Bachchan’s 79th birthday, Ranjeet, who played the villain in so many of their blockbusters together, from Yaarana and Laawaris to Muqaddar Ka Sikander and Namak Halaal flashbacks to their first film together, Reshma Aur Shera, and narrates a ghost story that played out on the desert sands.;

During that shoot, Ranjeet grew to admire and like the tall, lanky co-actor he shared his tent with. He tells Rediff.com Senior Contributor Roshmila Bhattacharya that Amitabh would begin each day reading the Bhagwad Gita and end it with a daily letter to his parents.

They met during the shoot of Reshmaed Shera whose love for Waheeda Rehman’s Reshma fires enemity between their Rajput Aur Shera, produced and directed by Sunil Dutt, who also played the title role of the hot-head clans, leading to much bloodshed and a supreme sacrifice.

Ranjeet enacted the role of Waheeda’s brother, Gopal, who, along with their father, is gunned down soon after his wedding, by Shera’s younger brother, Chhotu, as ordered by their father.

The tall, lanky Amitabh Bachchan was cast as the mute sharpshooter Chhotu.

Shooting was already underway when Ranjeet left Bombay for Rajasthan. He had to take a couple of hopping flights and drive down the last stretch to reach the location in the middle of the desert, 50 kms away from Jaisalmer.

“On the way, I learnt from the production controller that my only human contact would be the unit members and the 40-50 inmates of a nearby village. Water came from Jaisalmer and even food was scarce in the desert.”

“Death were common and corpses were left on the sands for vultures to feast on, and ghosts lurked around in the darkness of the night,” recounts Ranjeet.

He learnt much later that he had been fed all these horror stories on the instructions of Sunil Dutt who had been a real prankster.

But since he had no idea then that he was being pranked, the actor arrived at the location quaking in his shoes and bhoots playing on his mind.

There were several tents pitched around. Waheeda shared one with her sister and maid, Raakhee one with her make-up girl. “Amitabh had arrived before me from Delhi. I introduced myself not knowing then that he was the famous writer-poet Harivansh Rai Bachchan’s son. He had already worked in a film, Saat Hindustani, while I had been signed by Mohan Segal for Sawan Bhadon. We chatted casually over glasses of tea. I was very impressed with his deep baritone, never having heard a voice like his before,” Ranjeet recalls.

That evening, after ‘pack-up’, Waheeda, her sister, Raakhee went for a stroll in the desert. Trying to get under the skin of his character, Ranjeet dressed in his costume, accompanied the ladies, along with Amitabh.

“Once we were around 100-200 yards away from the camp, we sat down on the pristine sand and started chatting. After a while, Raakhee sang for us.”

Amitabh entertained us with Mere angne mein tumhara kya kaam hai, a UP folk song which he later crooned on screen for his drag act in Laawaris.

“Waheedaji was a top star then, but she had no inhibitions or ego hassles, and we were soon cracking jokes about bhoots when, suddenly I noticed a light about 500 yards away,” the veteran actor remembers..

By then, the sun had set and it was pitch dark. The light he had spotted was going on and off as it slowly approached them. With a shaking finger, he pointed it out to the others and they all watched apprehensively as it drew closer.

Holding hands, the five of them slowly started retracing their steps, the two actors calling out to the light and threatening it with dire circumstances should any of them be harmed.

“Alerted by our shouts, Zalim Singh, a former BSF soldier and our attendant, cocked his double barrel in the direction of the approaching light, saying menacingly, “Rukh jaa, nahin to maar daloonga.” Our threats fell on deaf ears,” Ranjeet recalls.

When the light was almost on them, he slipped off his mojaris and threw the slippers at the approaching light finger, while Zalim Singh, his finger on the trigger, got ready to fire.

“And then, a guffaw broke out,” Ranjeet recounts. Minutes later, they discovered that this was another of Sunil Dutt’s pranks. He had covered a mannequin with a white sheet, put a wig on its head and with a torch which he was switching on and off, had set out to scare them.

“He laughed at Amitabh and me, calling us darpok, and wondering how scaredy cats could be of any help to the women,” Ranjeet reminisces.

Embarrassed, they headed back to the camp were after dinner in the air-conditioned camper, they retired to their tents.

Stretched out on his bed, Ranjeet noticed Amitabh busily writing on a pad in the dim light of the lone bulb fired by the generator. Wondering what he was doing, he nodded off.

“The next morning, when I woke up, Amitabh was sitting on the floor, reading the Bhagwad Gita. When I was in the air force, my mother had given me the Hanuman Chalisa and I would read it occasionally, but I had never been particularly religious,” says Ranjeet.

He discovered over the next few days that this was Bachchan’s daily routine. “When I asked him about it, he shared that he wrote a letter to his parents every night, like a daily diary, and read the Gita every morning before going about his work. I was impressed,” he says, adding that by the time the schedule ended, they had become friends.

For the next schedule, Ranjeet flew to Delhi from Bombay and picked up Amitabh from his bungalow. After tea, they got into an Ambassador car which was to drive them back to the location. En route, after watching their driver down a bottle of rum, Amitabh offered to take the wheel. Unfortunately for them, the route was unfamiliar, the road pitted with potholes and the car landed in a ditch.

“We pulled it out, managed to get to our destination, paid the agent for the minor repairs and managed to keep the incident from Dutt sahab who would have turned us into a laughing stock again. It further strengthened the bond between us,” says Ranjeet.

He quickly discovered that his tent-mate was not always the serious introvert he appeared to be, he had a wonderful sense of humour, and was a terrific actor.

Since there was nothing to do out in the desert, Ranjeet would land up on the set to watch the shoot even when he was not required.

He vividly remembers the scene where Chhotu’s mother brings him to a devastated Waheeda and a stony-eyed Raakhee. After he has confessed to the shooting, she tells them to kill him and end this enemity.

“I was a bravura performance. Since Amitabh was goonga he had to express himself without words, through gestures and facial expressions and he nailed it perfectly,” Ranjeet applauds.

Reshma Aur Shera won three National Awards, was India’s entry for the Academy Awards in the Best Foreign Language category and was nominated for the prestigious Golden Bear at the Berlin International Film Festival.

It cemented a friendship that continued in Bombay where Amitabh would often drop by Ranjeet’s apartment for social gatherings.

“Back then there were no cell phones so we only bumped into each other at shoots and parties. We affectionately called each other Lale and whenever we met, we would embrace each other warmly and ask each other, “Aur bole Lale kaise ho? In minutes, our time apart would melt away and we would be laughing and joking ,” Ranjeet smiles fondly.

When Amitabh suffered a near fatal accident in 1982 on the sets of Coolie, Ranjeet was among his many concerned film fraternity friends to rush to the Breach Candy hospital, going there often to enquire after his well-being.

They have not worked together in years, but as Amitabh turns 79 today, Ranjeet points out that while he played the bad man in many of their films together, they enjoyed lots of good times.