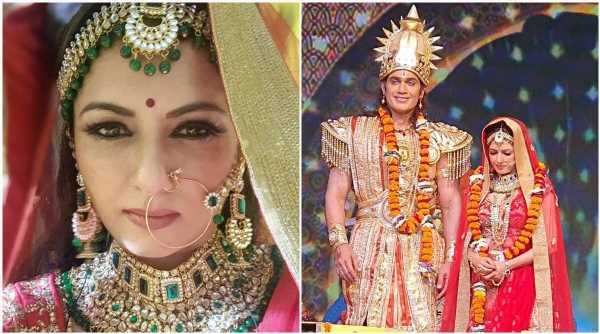 Bollywood actor Bhagyashree had a great time as she played Sita in the Ram Leela that took place in Ayodhya, Uttar Pradesh on Friday. Offering a glimpse into the grand celebration, Bhagyashree shared photos and videos dressed as Sita. She also gave a glimpse of the stage.

Taking to her Instagram handles, Bhagyashree wrote, “SIYA RAMCHANDRA KI JAI! Last night was blessed to be able to be in Ayodhya for Ramleela, as Sita Maiya! Unbelievable to be able to connect with 19crore people worldwide watching this great epic streamed live. Being here during the auspicious time of #navratri was as perfect as it could be.”

Bhagyashree, in her Sita avatar, was seen donning a red lehenga and heavy jewellery along with flower garlands.

The Ram Leela in Ayodhya mainly hosts a live audience, however due to the Covid-19 pandemic, the stage show is being streamed online and broadcasted on National Television.

On the work front, Bhagyashree was last seen in Kangana Ranaut’s Thalaivii as Jayalalithaa’s mother. Incidentally, Kangana is also preparing to play Sita in her next — The Incarnation, which will be helmed by Alaukik Desai. The film’s story has been written by veteran screenwriter KV Vijayendra Prasad. Reportedly, the film was earlier supposed to feature Kareena Kapoor as Sita.