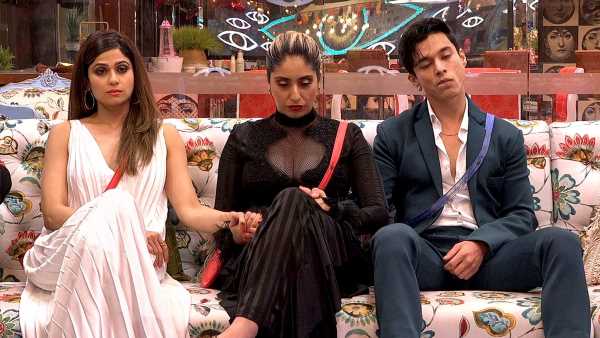 Akshara uses derogatory language for Neha and pays the price.

While Nia Sharma made a dhamakedaar entry last week, the television actress is asked to leave the house in Friday’s episode!

The housemates are shocked ,but they learn that Nia came in the house as a guest, not a contestant.

Also, there’s no new Boss man and Boss lady this week as the contestants performed the ladder task but everyone ended up with equal score.

But the show, as KJo says, must go on.

He reveals that the audiences have sent questions for the contestants. He asks everyone to answer them honestly.

The first three questions are for Akshara Singh regarding her unpleasant remarks for Neha Bhasin.

Karan confronts Akshara about using derogatory language for Neha. Initially, the Bhojpuri actress refuses to accept her remarks, but then she apologises.

Karan grills her for targeting Neha and judging her as a woman. Akshara tries to defend herself, but fails miserably.

The host then asks the other ladies in the house.

While Shamita says she stood up for Neha, Karan is disappointed with Divya for not doing the same. Later, Karan welcomes Ronit Roy and Richa Chadha on stage. They give a fun task to the contestants but by the end of it, Nishant and Shamita get into a huge fight.

Shamita is angry as Nishant calls her arrogant and also accuses her of not treating Raqesh Bapat properly.

She’s upset with Raqesh too, for not supporting her. The Nishant-Shamita fight turns ugly with both of them yelling at each other.

It goes on until Karan returns.

He asks them to calm down, as it’s time for eliminations.

Karan announces Millind Gaba’s journey has come to an end this week.

But there’s a twist.

The host reveals that not one but two housemates will be leaving the house together.

He declares that Akshara is evicted along with Milind. Back on stage, Karan calls Bigg Boss 14 winner Rubina Dilaik on stage along with Nikki Tamboli.

He reveals they will be entering the house to have a fun session with the contestants.