Borat: Subsequent Moviefilm is funnier than 2006's Borat. For the entirety of its run-time, it serves up gag after gag right until the last frame. 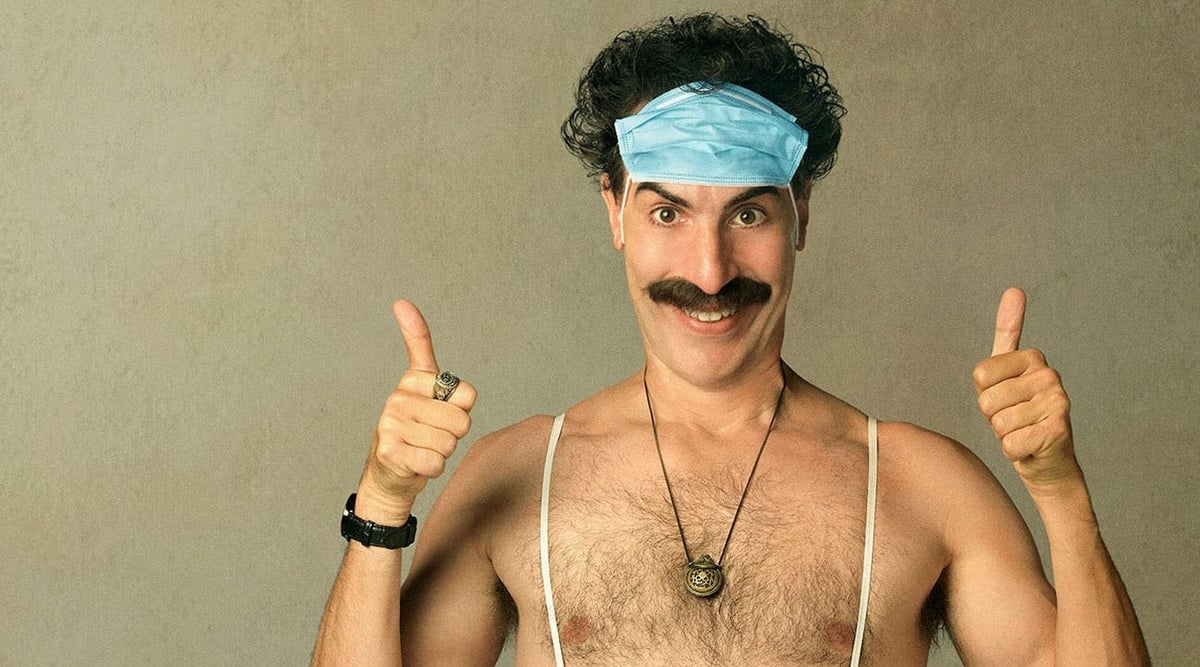 Sacha Baron Cohen’s return as Borat could not be more timely. The sequel to 2006’s mockumentary Borat is overtly political and has released only a few days before the US Presidential election.

In the first film, Borat went to the US to shoot a documentary so that his own country, Kazakhstan, can learn from the greatest country in the world. The sequel has him becoming a reviled figure for bringing shame to his homeland. After undergoing penal servitude for some time, he is sent to the US so the ‘Premiere’ Trump would acknowledge Kazakhstan’s president as one of his strongmen friends.

Sacha Baron Cohen elicited laughs in the first Borat film by interacting with real people who did not know they were part of a movie. They just thought he is a foreigner who is unaware of American norms and etiquette. In these conversations, Cohen laid bare their prejudices. He did that by making his character even more bigoted than the ones he was talking to. Those people felt comfortable enough to talk about their private beliefs with him because, despite his outlandishness, he was simply an extreme version of them.

This time, they are even more upfront, no longer bothering to hide their chauvinistic and reactionary views. This is Trump’s America, after all, where white supremacists feel emboldened and unashamed of who they are, and Cohen knows it.

Since the first film, Borat has become a known figure in America and people recognise him in the streets. In a meta way, this forces him to adopt disparate identities. If you read news reports about a disguised Cohen turning up in American right-wing rallies, speeches and events in the last couple of years, they all were for this movie.

With Borat comes his daughter (an amazing Maria Bakalova) who he decides to give to vice-president Mike Pence (also called vice-p***y grabber and Mike Penis) as a ‘gift’. Since that doesn’t work, he goes after Pence’s lawyer Rudy Giuliani.

The last bit has hogged headlines in the last few days, but it is only after watching the film one realises how bold the whole thing was. Giuliani was caught with his pants down — a bit too literally.

Many remain flabbergasted as to how Sacha Baron Cohen has been making utter fools out of powerful and smart men like Dick Cheney. Sure, he is highly proficient at his craft, if it can be called that. His identities are carefully and specifically calibrated for every person. You just validate somebody’s beliefs, and you have got yourself a talker.

But there is another reason too: Cohen’s targets invariably are too certain of their beliefs and will not budge even if the counter-argument was a verifiable fact. So when they come across Cohen’s characters, who spout the same nonsense as them, only exponentially worse, they can’t help but let their guard down.

Borat: Subsequent Moviefilm is funnier than 2006’s Borat. For the entirety of its run-time, it serves up gag after gag right until the last frame. Now, Borat 2 is no Wodehousian comedy. There is nothing classy about the humour here. There are one too many jokes about genitals, for instance. Cohen’s humour in the film is in bad taste. But most of the jokes are genuinely smart and loaded with subtle political and social commentary.

The writing is incredibly detailed, and it is worth listening to every single line of dialogue, no matter how offhand it appears. There is a joke everywhere.

Also, in today’s America, the jokes write themselves, even the dark ones. In one scene, Borat gets despondent and wishes to kill himself. “Since I did not have the money to buy a gun,” he says, “I went to the nearest synagogue to wait for next mass shooting.”

Borat: Subsequent Moviefilm is an audacious, brilliant sequel that is better than the original in every single way. It is more insightful, has more shock value, and it’s considerably funnier.