Even by standards of fluff, Girls Hostel 3 floats away without any anchor to entertainment, observes Deepa Gahlot.

A new season of any series should not assume that audiences have seen the previous ones.

There should be a way of taking the plot forward, without going over old ground, but also not leaving out the connections completely.

Going by Girls Hostel Season 3, it looks like the show has no reason to be made except to piggy-back on the previous two seasons, and tapping on the youth market that production company TVF targets in quite a lot of their Web contents.

Actors reappear across series, playing the similar roles, so all their teen shows tend to look and sound the same.

The first season brought with it the freshness of a bright young cast, and the novel idea of setting it in a girls’ hostel, where students of a dental college stay.

This time too, the show exists mostly in a parent-free vacuum. With the exception of two of girls, none to them seem to be answerable to anyone but herself.

Parents are presumably the invisible, non-interfering ATMs (finding Indian parents that are so passive would be a small miracle!).

Except for a few books scattered around hostel rooms, it does not look like there is any academic pressure on the students either — hardly possible in the area of medicine.

On the other end of the spectrum of youth shows, students have mental break downs because they cannot cope with the heavy burden — TVF’s Kota Factory being one of them; reality is probably somewhere in between.

The rivalry between rich girl Ramya Mantri (Shreya Mehta) and Zahira Ali (Parul Gulati) over the presidency of the student council of SVM College was already established in previous seasons, as was the corruption and meanness of the dean Dr Sarla Desai (Jayati Bhatia).

The big issue of harassment by boys (in real life, one reads stories of hooligans climbing walls of girls’ hostels and molesting the residents) was also dealt with before.

Their medical education seems to be the last thing on their minds — a rebellious character from the last season walks off because she would rather be in politics and the dean gives her an ultimatum to choose between her degree and her political aspirations.

The dean may be awful, but adults are not always wrong, even if teen shows invariably portray them as clueless or cruel or both.

The focus of Season 3, directed by Hanish D Kalia, is the gender fluidity of Vipassana (Tanvi Lehr Sonigra).

Some students being more woke than others decide a talent show is in order for students to express themselves.

It is hardly a matter of life and death, but Richa (Ahsaas Chanana) behaves as if it is, when the duties of council president are forced on her. Of the so-called talented lot, only one girl can sing, the rest are so pathetic, they might do better to crack open their text books.

If there is a genuine problem of power failure and lack of inverters in the hostel, the students find a strange and devious solution.

There is no real conflict or humour, except for the clownisn warden.

The show is so light, even by standards of fluff, that it floats away without any ideas to anchor it to relevance… or entertainment.

The actors are earnest and enthusiastic, but they are let down by the indifferent script.

On a campus littered with hokey motivational messages, Richa makes an impassioned speech about freedom (considering they have too much of it, rather than too little!) under a poster that reads ‘Be Strong Be Calm Be Greatful’.

Dental students can’t spell, which is probably why the title of the show has an apostrophe missing. 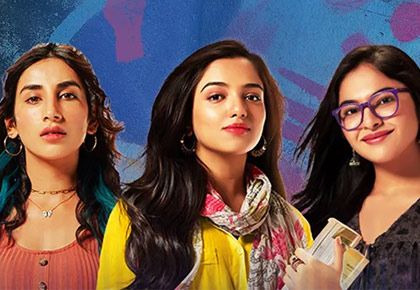