Govinda will be joined by wife Sunita and kids Tina and Yashvardhan on The Kapil Sharma Show. Bollywood’s Hero no 1 Govinda will join The Kapil Sharma Show team this weekend. His wife Sunita and daughter Tina will also join him while son Yashvardhan will make a special appearance. The family will be seen indulging in a laugh riot with Kapil and his cast, while sharing some fun anecdotes about each other.

Chi Chi, as Govinda is lovingly called, will also talk about his more than a three-decade long journey in Bollywood. He will also share some interesting stories from his shooting experiences. While the team will celebrate the superstar’s legacy with kids dancing to his popular songs, Govinda will also perform.

And while nephew Krushna Abhishek will be missing from the episode, his bestie and partner Sudesh Lehiri will get love and appreciation from Govinda. As per a source, the Bollywood star would be impressed with his act and shower him with compliments. “He told Sudesh that the way he is doing good in Kapil’s show, he will go on to many more in his career. His words made Sudesh emotional as he hugged the star and thanked him,” added the source.

Checkout pictures of Govinda and his family on The Kapil Sharma Show: 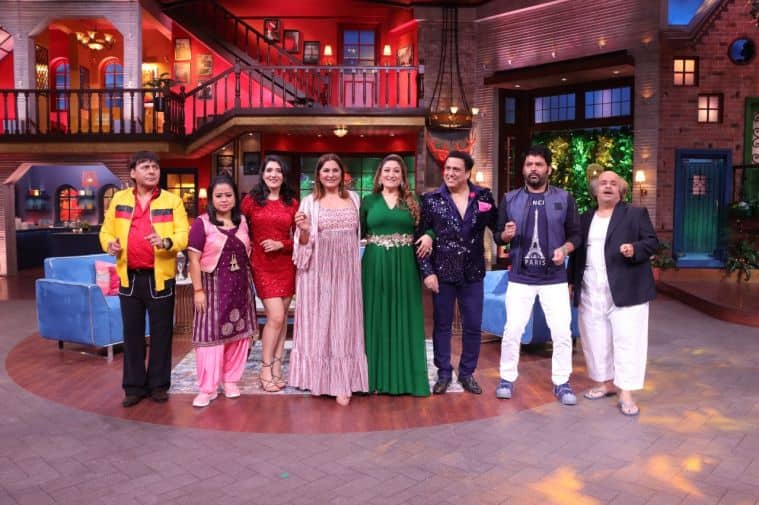 Comedian Krushna Abhishek recently confirmed that he would not star in the upcoming episode of The Kapil Sharma show, which will feature his uncle Govinda. Krushna and Govinda have shared a rather strained relationship for the past few years. In a recent interview to Times Of India, Krushna said that he has been trying to accommodate the show as well as his upcoming film. While he has usually been able to do so, he decided to not change the dates for this episode.

He said, “Since the past 15 days, I have been shuttling between Raipur and Mumbai to shoot for my film and Kapil’s show. I would always go that extra mile to adjust my dates for the show. However, when I learnt that they would be appearing as celebrity guests in the upcoming episode, I didn’t want to be a part of it, so I didn’t try to adjust my dates. I believe both parties don’t wish to share a stage.”