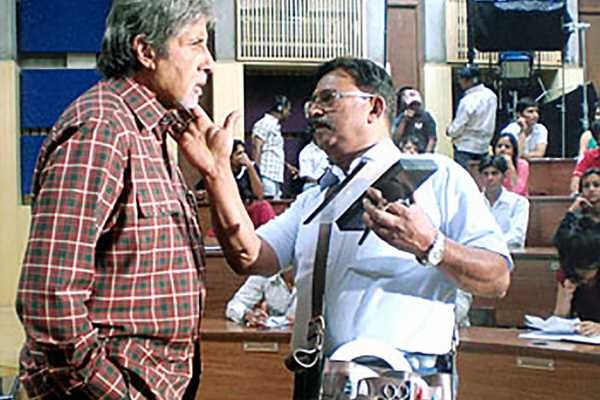 ‘That is the secret of his untiring energy.’

An actor’s journey is not his alone.

Many people contribute to making him a star behind the scenes.

We continue celebrating the Big B’s 80th birthday as Sawant shares some interesting insights on the legend.

“I used to make Amitji‘s face look red in fight scenes. Even when he wasn’t fighting, that red colour would make him look angry in his outbursts and that’s why he was known as the Angry Young Man. In emotional scenes, I used to apply oily make-up, so whenever he cried, his make-up would merge with tears and make his face look bright,” Mr Sawant tells Rediff.com Contributor Sameena Razzaq.

I met Amitji on the sets of Raaste Kaa Patthar.

He was shooting for Zanjeer simultaneously.

Since I was new in the industry, I was working as an assistant make-up man.

I hardly knew things and so my job was to only hold the mirror to actors at that point.

There were no make-up schools; the only way one could learn was by becoming assistants of established make-up artists.

Pandharidada (Juker) was the make-up man for Zanjeer and Baijnathdada was helming the make-up of all actors for Raaste Kaa Patthar.

We would learn from these veterans simply by observing what colours they would use for countering, hiding blemishes, spots etc and by remembering their numbers.

Gradually, I started doing the make-up of junior artistes. It so happened one day, Baijnathdada was doing the make-up of Laxmi Chhaya, the leading lady of Raaste Kaa Patthar.

He had no time to do Amitji‘s makeup.

Amitji waited for a long time and then realised Baijnathdada would not be able to do it.

So he asked me whether I could do his make-up.

I said yes if Baijnathdada would permit me.

Amitji spoke to Baijnathdada and I was allowed me to do his make-up.

Luck smiled upon me as Amitji was very happy with the make-up I did and told Baijnathdada that from now on, I will be doing his make-up.

My style of working was different from others.

I not only focused on make-up but also looked at other things, like how to keep the room clean.

I had a habit of placing a white towel on the dressing table and keeping the make-up tools in order on it.

Amitji was very impressed with all this and would often speak fondly about me to his driver Nagesh.

I met Nagesh one day and he confided that sahab likes your work, you should stay with him.

That’s how my association with Amitji started. While working with him, I used to see Amitji deeply engrossed in the scenes.

He would read it, put it aside and then read it again.

He would analyse how to deliver a dialogue, how high his tone should be.

He would hardly notice people in the surroundings because of his dedication.

People started assuming that Amitji had attitude, but that is not true.

After a few years, Amitji got involved in politics and I discontinued working with him.

When Smitaji passed away, I was called to do her funeral make-up.

Keeping up with Smitaji‘s last wish, I was told to dress her up like a bride.

While I was doing that, Amitji was sitting right there along with other actors and observing me.

After that, Amitji called me and asked me to work with him again.

During my absence, he had tried other make-up artists, but he wasn’t happy with them.

So I started working with him again. I had a habit of doing make-up based on a scene’s requirement and he liked that about me.

Even when he wasn’t fighting, that red colour would make him look angry in his outbursts and that’s why he was known as the Angry Young Man.

In emotional scenes, I used to apply oily make-up, so whenever he cried, his make-up would merge with tears and make his face look bright.

I don’t know how Amitji got his trademark hairstyle, but it suited him a lot. It became so iconic that everybody tried to copy it.

He never changed his hairstyle. Stars like Rishi Kapoor and Rajesh Khanna also tried to keep Amitji‘s hairstyle, but they weren’t successful.

He is 80, but he considers himself to be a young man and that is the secret of his untiring energy.

His journey has been amazing. In our industry, a 40-year-old man is considered to be old, but luckily, even at this advanced age, Amitji is getting the best of roles.

On the occasion of his birthday, I pray that may Amitji live for 120 years and I hope God keeps me alive to celebrate all his birthdays.