The reopening of cinema halls comes after the Union Ministry of Information and Broadcasting issued a set of Standard Operating Procedures (SOP) under its Unlock 5.0 guidelines recently. 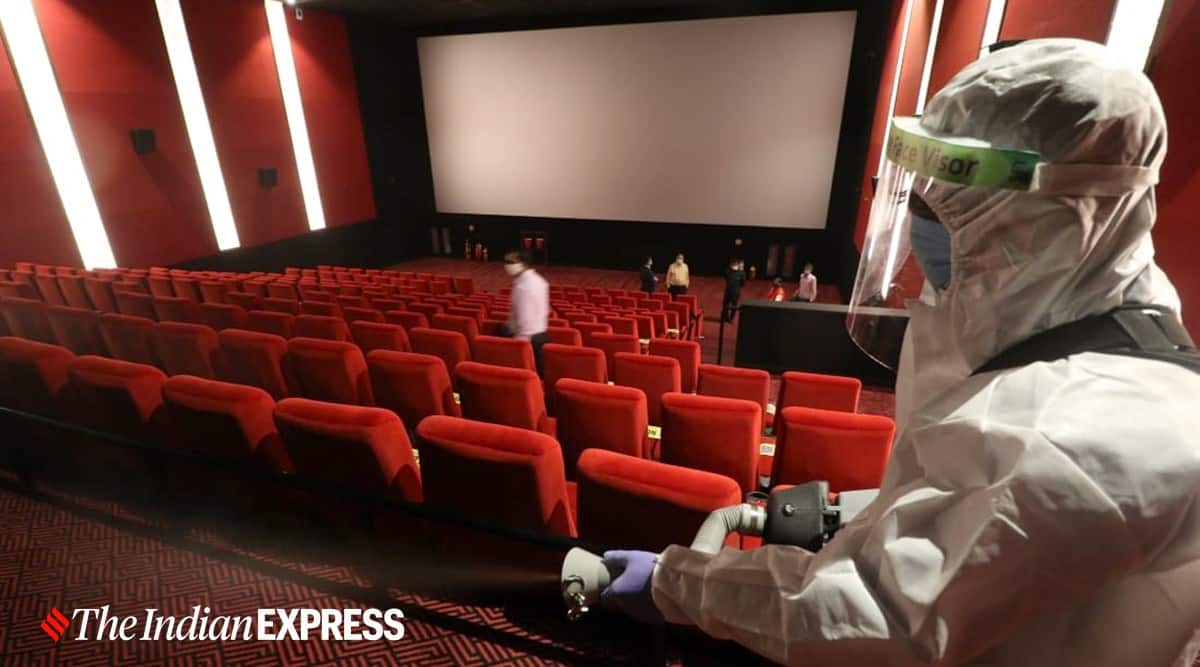 After remaining shut for nearly seven months, cinema halls outside containment zones in several Indian states reopened on October 15. But things aren’t going to be same anymore. India, where films are a social event and a major means of entertainment, now needs to get used to a new era of movie watching.

Theatres are strictly abiding by the SOPs issued by the government to ensure the safety of its patrons. These include lesser shows, 50 per cent occupancy, distanced seating, compulsory masks, contactless payments, single-use 3D glasses and others.

On Wednesday, PVR Cinemas carried out a demonstration of all the precautions it has put in place. According to Gagan Kapur, Regional Head, PVR Cinemas, Delhi, the entire ticketing process has gone paperless with customers scanning their ticket codes. Even the food menu is QR code-enabled and uses UV-sterilised packaging. “Every touchpoint, all the door handles have an anti-microbial film. The cinema halls have been sprayed with electrostatic guns which are long-lasting for 30 days or so. The shows are going to be planned in a manner that no two intervals coincide, so that no overcrowding happens in the lobby and washrooms. The entire theatre will be disinfected between the shows. Since that would increase the waiting period, there’ll be a little lesser shows initially,” Kapur said, adding that social distancing is being practised inside the theatre along with staggered exits, PPE kits on payment and placement of hand sanitisers in every corner.

So how long did PVR Cinemas take to adapt to the new guidelines? Kapur shared that the multiplex chain was working way in advance to put most of the SOPs in place as soon as the shutdown happened. These included working on the new protocols, training of its staff, and research.

But a bigger question arises is, whether or not patrons will feel safe and confident to return to theatres. As an attraction, the cinema chain is set to come up with many special shows including shows for health workers and frontline warriors, along with an exciting lineup of movies. Even as theatres reopened in many Indian states on October 15, there is no clarity on when cinema halls in Maharashtra will start functioning once again.

However, INOX Leisure Ltd, India’s second-largest multiplex operator, this week showcased how they have prepared their chain of multiplexes in Mumbai for the reopening.

All over the country, INOX multiplexes will strictly adhere to the SOPs laid down by the Information and Broadcasting Ministry of India, and will open their cinema halls with 50 per cent occupancy.

There will be temperature checks carried out at entry points, no one with a high temperature or flu-like symptoms will be allowed inside the cinema premises. An INOX representative will note down contact details of each patron walking into the cinema hall. The biggest change they are aiming to make is to do away with paper tickets altogether. Cine-goers will have to scan the QR code of their tickets after security check, follow social distancing and high hygiene practices. There are sanitiser stands planted at every touchpoint, so the patrons can keep sanitising their hands regularly. Safe distance stickers are marked on the floor to make sure patrons can follow social distancing. INOX has also introduced an e-menu, patrons can scan the QR code that is pasted on every digital poster and walls, and make their food orders. After ordering their food, the food will be kept ready, and patrons can collect it at the food counter.

Rajeev Patni, COO of INOX Leisure Ltd, told indianexpress.com that he welcomes the move to re-open cinema halls in India. He mentioned that INOX would be running shows for nine hours in a day for a couple of weeks before they start showcasing films full-fledged.

Patni also informed that 50 per cent occupancy would not affect ticket pricing. He said, “There is going to be no increase in the ticket price. Our formula is always going to be the same as pre-Covid days. It will depend on the paying propensity, the cost factor involved, the season and the time of the day.”

Rajeev Patni then emphasised how INOX will initially function on library content and then start showing new films as new content starts flowing in.

He said, “Initially, we will begin with the library content, and we will be running probably for nine hours. To schedule timings of the show, we will keep in mind how the situation is in the area and what the customers want. Once people get the confidence and they start coming in, and once we have content flowing in, we will have all the shows from morning to night.”

“We have so much content, especially Bollywood, which is ready. Let me give you an example of Sooryavanshi, which is the biggest film of the year. There are other films which are 80-90% ready, so there is a lot of content ready for release in theatres. In West Bengal, we are going to have five big releases this month on account of Durga Puja. So, I don’t think there is any dearth of content. Besides Bengali content, we also have Tamil, Telugu, Kannada, Punjabi content flowing in. Content part should not be an issue. The first two-three weeks we will be testing, and soon we will start proper functioning,” Patni concluded.