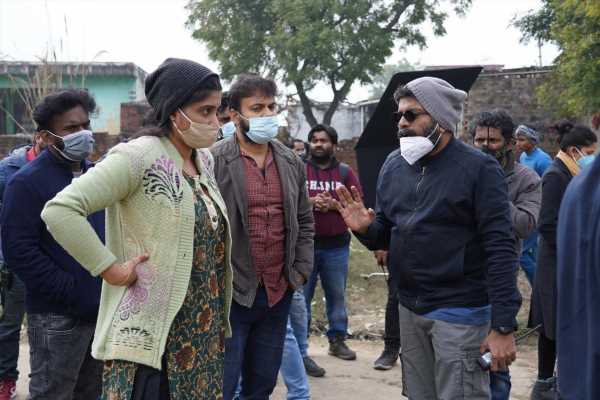 ‘I never thought the European audience will love this film, but we had over 2,000 people at the screening.’

One of the leading voices of the Malayalam language cinema, Mahesh Narayanan has directed three remarkable films — Take Off (the story about Indian nurses who were stranded in Iraq), C U Soon (India’s first pandemic film shot using smartphones) and Malik (a gangster saga).

Now he is back with a new film Ariyippu (Declaration), very different from his previous works.

Ariyippu — an official selection for this year’s British Film Institute London Film Festival — focuses on immigrants from Kerala stuck in the Delhi NCR area during the pandemic, while they wait to get paperwork approved that will help them migrate to the Middle East.

While Hareesh and Reshmi wait for their visas, they take up jobs in a factory that makes medical gloves, and get entangled in a scam and also a scandal. 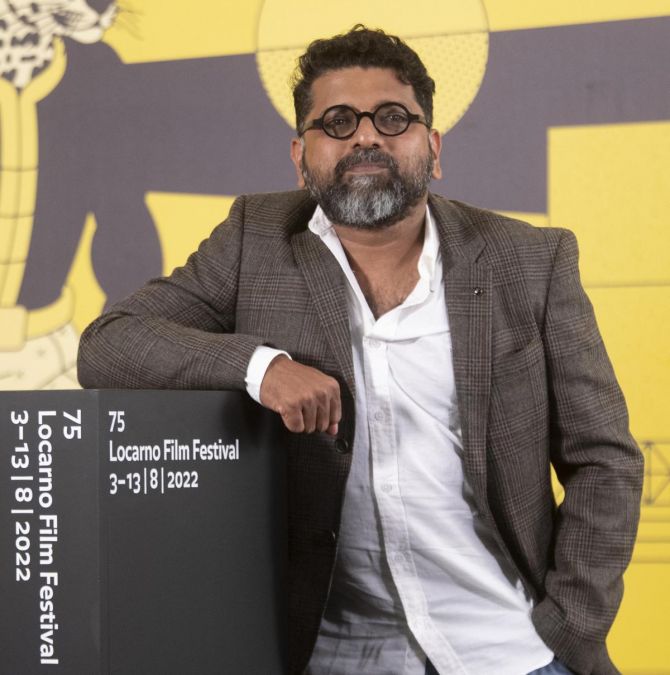 Ariyippu is a strong, moving film, very authentic in its representation of the location, the time and the characters.

Last month the film premiered at the Locarno Film Festival where it was very well received. It was the first Indian film to play in the festival’s competition section in 17 years.

“I never thought Europeans will understand the cultural differences between North and South India”, Narayanan tells Rediff.com Senior Contributor Aseem Chhabra in an interview after his return from Locarno. 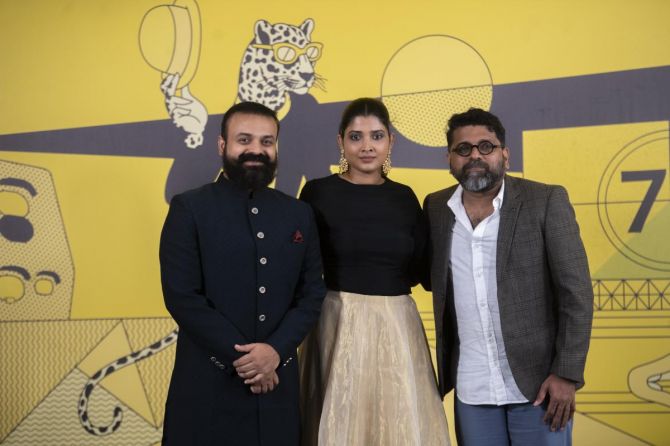 Mahesh you recently got back from Locarno. How was the film received there?

It was in the competition section. We had four screenings. The first screening was jam packed.

I never thought the European audience will love this film, but we had over 2,000 people at the screening.

No that has a capacity to hold up to 8,000 people. They don’t show films in the competition section in the Piazza Grande. But Locarno has big theatres.

This was the first screening of the film. And it’s the first time I took my film to a festival before its release in India.

And the audience got all the nuances.

I have shown a story set in Noida. I never thought Europeans will understand the cultural differences between North and South India.

They even felt it is a strong feminist film. They understood the feminist statement we made through the character Reshmi, her motivations.

We were out on the streets after the screenings and people started recognising the actors. 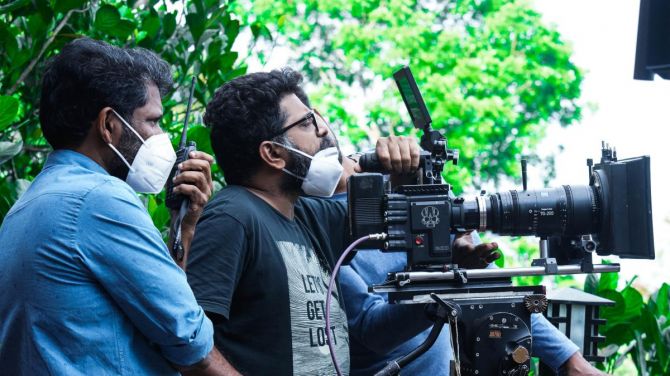 I have seen all your films. Each has such a different story and theme. Many film-makers make similar films again and again, but here each one is very unique. And then you also wrote the script for Malayankunju.
How do you challenge yourself to write so many different stories?

I try and follow the rule that one film should not be similar to the other film.

But the one thing my films have in common is that they are all based on migration related of stories, about skilled workers moving seeking fortune in a different country.

An immigrant element is always there. 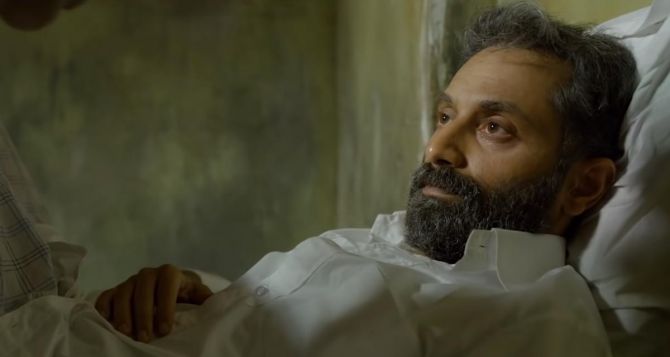 To an extent because Malik (the character played by Fahadh Faasil) comes as an immigrant into this town. He doesn’t belong there.

Another thing is, whenever I make films I pick up stories from my surroundings.

If you look at Take Off, C U Soon, Malik and in this case also — none of them are based on fictional stories. They all come from my surroundings.

With Declaration I wanted to satisfy myself as a storyteller.

In my previous films there was a certain amount of catering which was done to the audience.

The commercial viability of the film was important for me.

I have never tried any project without thinking about the audience.

Declaration is the only film where while writing I didn’t think it that should be received well by the audience.

I had the freedom to execute the film in such a manner that I thought ‘Okay, let me make an honest film and then see whether it’s working, let’s see then how it travels.’ 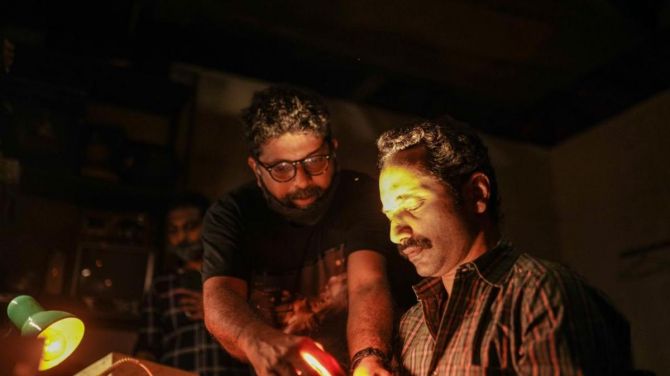 I had no idea that there are such a large number of people from Kerala residing in Noida. Everyone knows the story about Malayali nurses. And Delhi being the national capital, you have people from every part of India here.
But this story of Malayali immigrants coming to Delhi NCR, waiting for the visas to go to Dubai or elsewhere in the Middle East is fascinating.

There are people trying to go to various parts of India, particularly where there are special economic zones, because they get higher wages.

Kochi, for instance, is a special economic zone in Kerala. And huge populations — many factory workers, some of them in the rubber industry, or pharmaceuticals arrive there for work.

Most of these workers are not planning to stay in India for long. They are waiting for opportunities to go abroad.

It is similar as with the nurses.

In the film the skill video is made by Reshmi — the wife — because she is a skilled worker. And the husband is just a supervisor.

For them to get a chance, to go abroad, the wife will get the opportunity first because she is a skilled worker, and then the husband will travel with her.

So it is a marriage of convenience.

What is happening in Kerala is not new. The skilled workers land in Bangalore or Mumbai or Delhi. They have to stay there for six to eight months for their visas to be processed. It’s expensive to travel back and forth and so they keep staying in these cities.

The story is set in that eight months of time period.

In order for them to survive they have to work. There are factories that give them work. But there is exploitation happening in these factories.

Everyone knows the workers are not going to stay there permanently. They don’t have proper contracts and often earn half the salary. 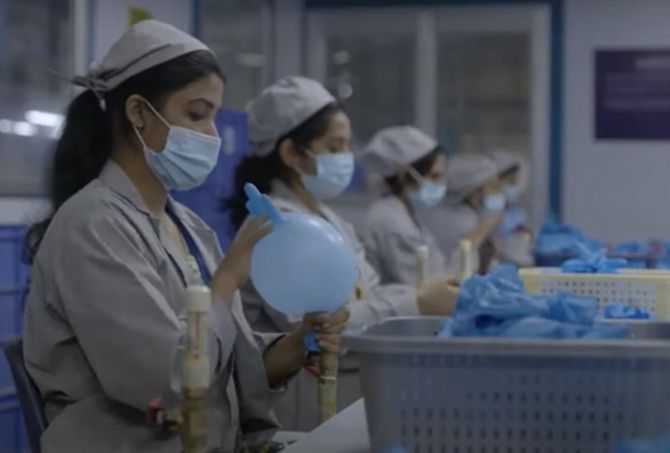 So while doing your research you found such factories in Noida?

We saw a factory in Noida, but we couldn’t shoot there.

The story deals with a scam and also we were in the midst of the Omiron wave. And they couldn’t stop their machinery for the film shoot.

We actually put a set of the factory in Faridabad.

We found a non-functioning factory and rebuilt a set inside it.

We had to source people who would work as extras, but were trained in making gloves.

It was very tedious for us because I searched for almost six months for the factory and then the extras.

I never thought that it’s a pandemic story. But I had to honestly represent the time.

Inside the factory it was mandatory to wear a mask. And people were also scared.

I realised that the story flowed.

The communication worked well, so the masks didn’t matter.

It didn’t matter how much of the faces you could see.

It also became a metaphor in the film. How much of Reshma’s eyes you see through the mask?

How much of the narrative is visible to the eyes and how much of it unfolds without us seeing it? 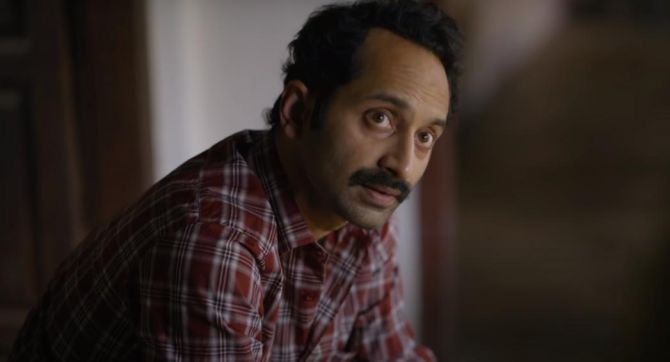 You cast Fahadh Faasil in your first four films. You obviously work very well with him. What is it like working with him? And I am curious why you did not cast him in this film?

I cast actors based on the whoever fits the role.

Here the role of Hareesh is a middle-class person who is a loser, trying hard to achieve something in his life.

I didn’t want big stars in the film.

Divya Prabha has never played a lead role so far. She played supporting roles in Take Off and Malik.

We needed actors who are relatable. So that was a deliberate decision.

I was hoping for certain new nuances, where the actors appear local and rooted, where a second lead or an actor who is not coming from a big mainstream cinema will do.

Fahadh and I have been friends for a long period. We understand each other very well.

There is a common ground which we come from. Our sensibilities always match.

Whenever I have an idea, I bounce it off him. It is not about him saying he wants to play a role or I want him to be the actor in the film.

He also collaborates well. He will always research, try and figure out the backstory of every character he has to play.

He is a learner and we both want to learn about a particular story together.

It is a situation where a person who is constantly associated with you, understands you and your setting well.

So there is a comfort level.

We have arguments, we have fights and issues, but it’s all for the betterment of a film.

Even when we produce films together it’s the same common dream, where we have challenges, we have issues and problems, but our goal is the same.

You were recently shooting in Canada. What is that film?

It was part of a M T Vasudevan Nair anthology of films by 10 film-makers. My segment is called Sherlock. Fahadh is in it as well.

IMDb lists a new project you are working on called Phantom Hospital. Can talk about that film?

Phantom Hospital will be set in Kerala. It is still in the development stage.

The idea is based on research by the journalist Josy Joseph.

I am working with Producer Priti Shahani who also produced Raazi and Talvar.

This is the first time I will make a Hindi language film.