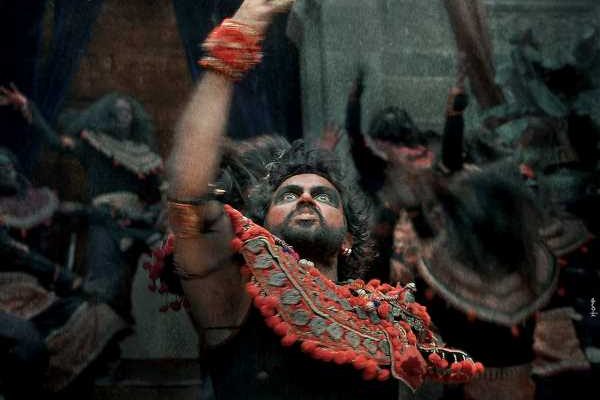 ‘My mom said when she was in college, her classmates said they want to marry somebody like Vallavaraiyan Vanthiyathevan.’
‘That’s the kind of pressure I had the moment Mani sir said you have to play this part.’

Making Mani Ratnam’s dream come alive in Ponniyin Selvan was a dream for the film’s cast and crew too.

No wonder, it’s looking so grand and larger-than-life.

Karthi, who plays a pivotal role in the film, tells Rediff.com Contributor Mohnish Singh why he was scared about acting in the epic.

How was your experience working as an assistant director for Mani Ratnam?

My journey and my life started with Mani Ratnam.

He wanted to cast somebody who would look like Surya’s brother.

But Surya’s brother came from the US and Mani sir thought, why not see him? But I was probably 110 kilos.

I took the opportunity to meet Mani sir, and tell him, sir, I want to work, that’s why I came back from the US. He said most welcome.

For the next two weeks, I joined Mani Ratnam and started working with him.

If I had achieved something in these last 15 years, I think I have learned everything from Mani Ratnam.

You know, his passion for cinema, the discipline, the way he never compromises on anything, and the way he wants to push the envelope.

He never compromises, he wants to, you know, take everything to the next level in terms of everything. He doesn’t want to repeat himself.

He pushes you, and he gets the best out of you.

Like what Rahman sir beautifully said that day, you know, he is always looking for something extraordinary, he keeps searching, that’s something which I always learn from him and this particular film. I think is a dream for about 40 years (for him) and this has been the dream for the Tamil film industry for about 70 years.

It’s one of the best-selling novels till today.

My daughter, who is nine years old, is loving it.

So you can imagine the success of the story already. It is already a hit. And the way Mani Ratnam is going to bring it on screen, it was a pleasure.

The first day we went to shoot, it felt like going to the temple.

We were woken up at 2 am and all these guys, this fabulous costume and make up guys were up and they were ready.

I don’t know when they slept or if they even slept that day.

The first shot was at 6 am and I could see Mani Ratnam happy because we know as ADs, if he doesn’t get the shot at 6 am, we are dead.

I think every actor in the film has been a hero or a heroine, and this particular story has characters like how a Mahabharata or a Ramayana has.

So well-edged layered characters and that’s why this novel is still so good.

Playing these characters aren’t easy, you know. There are so many imaginations of each character and taking it in like how Mani Ratnam says, keep it real but real in 1,000 years back, that’s a big challenge.

You have to understand how society worked 1,000 years back.

Like the Cholas had their own fleet. They had conquered all over South Asia.

I won’t say it’s a film, it’s an experience.

The character you are playing is one of the most favourites in the book. How challenging was that?

It was quite scary because my mom said that when she was in college, her classmates said they want to marry somebody like Vallavaraiyan Vanthiyathevan. That’s the kind of pressure I had the moment Mani sir said you have to play this part. So imagine a superhit novel and so many imaginations and I have to live up to it.

But I had Mani Ratnam sir with me.

Also, this character meets all the characters in the film.

I was little scared, but Mani sir took me along.

One day, Mani sir said, ‘You can be more real, you are trying to act.’

That scared me so much that I started understanding the period.

We have to know how people lived then.

All we know from history is which king conquered what but we don’t know what lifestyle they had.

The Cholas were so rich in their administration.

Have you ever heard a king saying I am the servant of my people?

That’s how those people were.

They had free hospitals.

They had trade from all over the world.

So imagine, you are living in the most cosmopolitan times 1,000 years back.

They were not barbarians. They were rich, sophisticated…

So I had to understand the period to be able to walk into a frame.