‘I am not disappointed with whatever roles come my way.’
‘I feel disappointment is a sign of ungratefulness.’

Suraj Pe Mangal Bhari released in theatres at a time when people were still battling with the phobia to get out of their homes. Luckily, despite the odds, the film was well received.

For those who missed out on watching this film, can watch it when it starts streaming on February 28 on ZEE5.

Along with stars like Manoj Bajpayee and Diljit Dosanjh, the film also stars actress Supriya Pilgaonkar.

In a free-wheeling chat with Rediff.com Contributor Sameena Razzaq, Supriya discusses her career and the kind of roles that come to her today, saying, “Initially, when a role is offered to me, it doesn’t look small. Somehow in the end, it shrinks in size.”

Suraj Pe Mangal Bhari released in theatres in November, and now it will have a digital release. How exciting is this development for you as an actor?

I am very happy.

I don’t really understand the difference between a theatre release and a Web release, but I am happy with the way the film is appreciated.

For that matter, any film that gets appreciation after such hard work is really heartwarming.

You have worked with seasoned performers like Manoj Bajpayee and Diljit Dosanjh in the film. How was the experience?

Manojji is a fantastic actor; I have followed his work.

But I was pleasantly surprised about Diljit. He is such a wonderful person.

He has made his niche in a short span in Bollywood, which is very creditable.

I had more scenes with Manojji, so I did not get to interact that much with Diljit.

All of us — Manojji, Annuji (Kapoor) and I — get along really well, and I had a great time because of that homely vibe on the set.

I had worked with Annu Kapoorji, so I knew him.

I had never worked with Manojji and Diljit before.

Even the director of the film Abhishek (Sharma) is such a wonderful person.

The film was made in just one schedule.

We had finished shooting for the film just a day before the lockdown started.

They wanted to release it in August, but it got delayed. You will be seen in a pivotal role in Janani. What attracted you to this project?

Janani is a great story to be told.

I could get such a role only on television because I have always done strong, meaty characters in this medium.

I never got to play such roles in films.

The pivotal, almost lead, roles will not come to me in any other medium but television, so obviously, I said yes.

My family told me I must do it.

When I got this offer, we were still in lockdown.

I had okayed the project then and now finally it’s coming on air.

The show is a journey from a dependent mother to an independent and successful mother.

One mother can take care of 10 kids, but even 10 kids collectively can’t take care of a mother when they grow up.

They are trying to show this in a realistic way.

Janani will see you team up with your Tu Tu Main Main co-star, Mahesh Thakur. It must be quite nostalgic to work with him again.

Yes. I had worked with him in Sasural Genda Phool too.

We play a couple again here.

We have a great comfort level because we are good friends. You have done pivotal roles in television. Do you think the OTT platform will give you that kind of scale?

I will have to prove myself on that first.

On television, I have been fortunate to be a part of good roles, which I think I have done justice to.

I know the Web format is different, but I am not saying that I cannot do it.

I know what I am capable of, but people in the digital medium should also know that.

The directors, the makers, the platforms should want to cast me.

If I get an offer on OTT, I will not leave it, even if the role is small.

If it’s different, I will definitely take it up.

I did a show called Home on the Web. After that, I was getting the same old mother roles that weren’t that meaty.

Does it get disappointing that the only offers that come your way are mother roles?

I don’t know whether I should get disappointed, but I would really rejoice if something different came my way.

But there are so many wonderful actors and actresses around.

I am not the only one.

Those who get a chance to work depends on destiny.

Maybe when I get to play these mother roles, other people must be thinking they should also get opportunities like this, so I don’t feel disappointed at all. What kind of roles would you want to play?

I would love to do good comedy.

I would love to play a layered character, probably with darker shades.

The image that I have garnered playing these mother roles on television is very positive and vulnerable.

People think I have done these roles very well, so that positive image has stuck to me.

To break it, it is necessary for people to imagine me in different characters.

For that, either they have to know me in person or I have to audition for it.

If both these things do not happen, how will these roles come to me?

But I am not disappointed with whatever roles come my way. 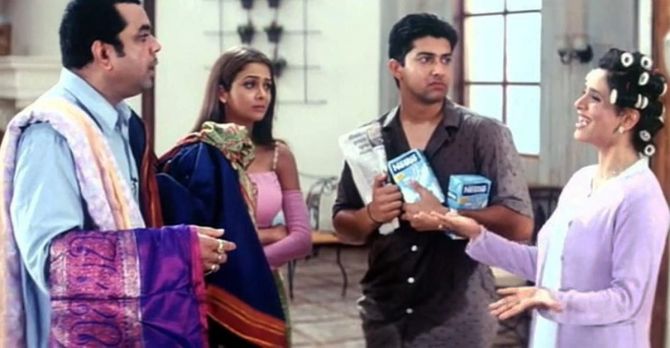 You have been in the industry for more than 27 years. Why does a brilliant actress like you only do small roles in films?

I think I have done smaller roles in Hindi films simply because I haven’t done that much in Bollywood.

Initially, when a role is offered to me, it doesn’t look small.

Somehow in the end, it shrinks in size.

So in Hindi films, I look at working with good people without caring about the size of the role.

When I work with them, they will at least have an idea about what I can or cannot do and then I can get an opportunity in the future.

That’s why I take up these small roles.

Very few roles are written for people of my age.

Neenaji (Gupta) was seen in a role like Badhaai Ho, which became successful also.

She is the pioneer in such roles.

Maybe I will get something like that some day.

Do you think Bollywood has not warmed up to you because you come from a Marathi film background?

I don’t think that is the case.

They are all very fond of me and speak nicely to me.

I think I don’t come in their list because I haven’t done much work in Bollywood.

People, who have been regular, get repeated.

In fact, a couple of Bollywood film-makers had called me because they had seen my work in Tu Tu Main Main and they were very fond of my character. That’s how I got Awara Paagal Deewana.

They are very respectful because of my background in television, but it’s just that I haven’t got enough roles.

Luckily, my role in Suraj Pe Mangal Bhari was very cute and I am really grateful to Abhishek for that.

It’s a good role, not just a prop. Your daughter Shriya Pilgaonkar has done exceedingly well in a short span as an actress. Is this because of her genes or the choices she’s making as far as work is concerned?

It’s because of the choices she is making, along with little bit of genes too.

She is immensely hard working, very ambitious and very passionate.

She takes decisions on her own.

The goodwill that she receives and we receive as her parents is very heartwarming.

Of course, we are there to support her and see that she enjoys this journey.

Does Shriya discuss her projects with you and take your opinion?

Shriya discusses her work only when she is very confused. But that’s been a very rare case.

She decides herself what she wants to take up and what she doesn’t.

It’s always been a practice to have healthy discussions about things, but in reality, she alone decides whether she wants to do it or not. Shriya has been part of big projects like Mirzapur and Crackdown. Now, she will be seen in Kadaan. What do you think of these projects?

Whatever characters she has chosen, she does full justice to them, be it Mirzapur or Crackdown or Kadaan.

I am very happy with the way she treats these characters as an actor.

Honestly, I am a fan of her work because when I had started my career, I did not have this kind of maturity.

When I look at us, I think she has far more maturity than I ever did.

Her film appreciation skills are filled with logic.

I am like the common audience, but she has a very fine taste.

I think she is in the right profession.

Earlier, I was not sure.

See, I am in this profession not because I chose it. It happened by chance.

But she has chosen it.

She is really good at what she does.

Do you think roles — whether in films, television or OTT — are opening up for women of all ages?

I saw Delhi Crime and I am really happy that Shefali Shah was the protagonist.

Neenaji was absolutely out of the world in Badhaai Ho/

On television, at this age, I’m kind of the protagonist in Janani.

So yes, the work for women of all ages is opening up. I hope it continues. 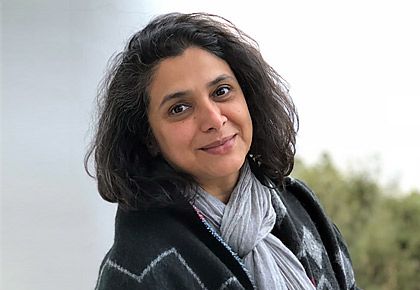