Anil Kapoor and Jackie Shroff are all set to announce a new collaboration. Anil announced this in a hilarious new post featuring both of them. Anil Kapoor took to Instagram to share a couple of his pictures with his co-star of many films, Jackie Shroff. The two powerhouse actors have done 12 films together, including Ram Lakhan, Parinda, Roop Ki Rani Choron Ka Raja, 1942: A Love Story, Trimurti and Shootout At Wadala.

Sharing photos of the two of them immersed in a conversation, Kapoor captioned the picture: “@bindasbhidu to me: Main phir se 16-17 thappad maarunga jaise ki maine Parinda mein maare the agar nahi bataya ki humaaru film kab shuru hogi. (I’ll slap you 16-17 times, like I did in Parinda, unless you tell me when we are starting work our film together.)” Sharing yet another picture, Anil wrote, “Me to @bindsbhidu: Bohot jald… script par kaam chal raha hai (very soon. The script is on its way).” 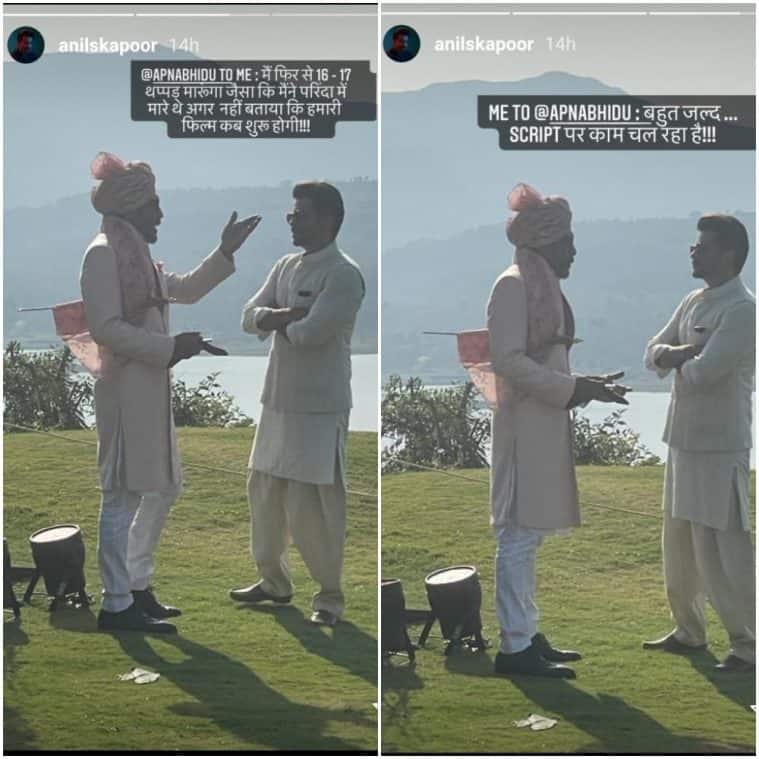 Talking about his long-standing friendship with Jackie Shroff and how they maintained their professional equation, Anil had once opened up in an interview that while many actors couldn’t get along with one another, they gelled perfectly and were aware of their “pluses and minuses”, making them perfect “foil” for each other. The AK vs AK star had said in an interview with Film Companion, “Both of us would fill the frame and the filmmakers and the audience would get what they wanted from both of us. So what I couldn’t do, he could do, and what he couldn’t do, I could. I think that’s the reason we did so many films together and of course, nothing succeeds like success. All our films were very successful and we got comfortable and helped each other in our work and performances. We were friends and we really liked each other. Our wives got along really well and I still am as close to Jackie as I was when I started my career.”

Jackie, who was last seen in Salman Khan’s Bharat, and son Tiger’s Baaghi 3, will be next seen in Rohit Shetty’s Sooryvanshi, Radhe: Your Most Wanted Bhai and Mumbai Saga with John Abraham.