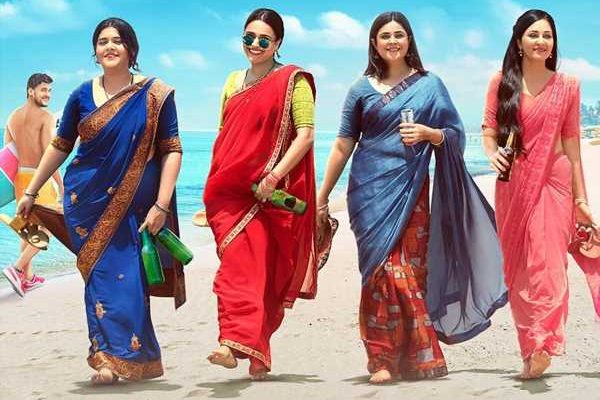 A silly flick that wants to say something meaningful in the support of women’s empowerment yet can’t resist being flippant at every given opportunity, observes Sukanya Verma.

Whenever it forms the focus of a story, these bonds are either defined by tough times or letting the hair down.

Written and directed by Kamal Pandey, Jahaan Chaar Yaar flimsily attempts a mish-mash of both where four friends in desperate need of a break find themselves embroiled in a murder mystery.

Its lighthearted potential for capturing small town women breaking out of domestic monotony and behenji imagery over the course of unexpected escapades in Goa is lost in a jumbled plot and infantile wit.

Neha’s husband is cheating on her with a younger colleague at work.

Sakina’s husband has fertility issues whose blame she solely carries.

But a call from their fourth BFF Mansi (Mehr Vij) changes all that.

By hook or crook, they find themselves far, far away from nagging mothers-in-law, indifferent husbands and thankless roles in a sea-facing paradise of Goa.

Of the four, only Swara leaves any real impression with her comical outrage and conservatism.

Meanwhile, hunky goras find their way faster than pizza at the doorsteps of hungry women.

And like all Caucasian tourists in Bollywood, this one too is ready to strip and party with.

What follows hereafter is the stupidest murder mystery linked to a holiday gone awry.

Between a cop offering lessons on how these women ought to liberate themselves by citing a Russian president’s misogyny as example or ordering their makeovers as a ruse to nab the murderer on loose, Jahaan Chaar Yaar completely loses its marbles.

Adulterous men teem as do pestering, bossy, wives in this silly flick that wants to say something meaningful in the support of women’s empowerment yet cannot resist being flippant at every given opportunity.

We see song after song of the girls having fun at clubs and resorts but neither their friendship nor their problems achieve any depth in this Veere Di Wedding on budget.