Katrina Kaif arrived on Koffee With Karan 7 with Ishaan Khatter and Siddhant Chaturvedi, her co-stars from the coming film Phone Bhoot.

While Kat opened up about her relationship and marriage with Vicky Kaushal for the first time, Ishaan and Siddhant spoke about their respective love lives and work.

Together, the three of them were an absolute riot on the tenth episode of the chat show.

Namrata Thakker brings you the highlights.

On KWK 7, Katrina spoke at length about her relationship with Vicky Kaushal and how it all began.

She claimed she wasn’t dating Vicky when reports about them were doing the rounds. In fact, the hunky actor wasn’t even on Katrina’s radar.

‘I did not even know much about him. He was just a name I had heard, but had never associated with. But then, when I met him, I was won over,’ she said.

Katrina revealed that Zoya Akhtar was the first to know about her feelings for Vicky, adding that their relationship happened unexpectedly: ‘It was my destiny and it was really meant to be. There were so many coincidences that at one point all of it just felt so unreal.’ 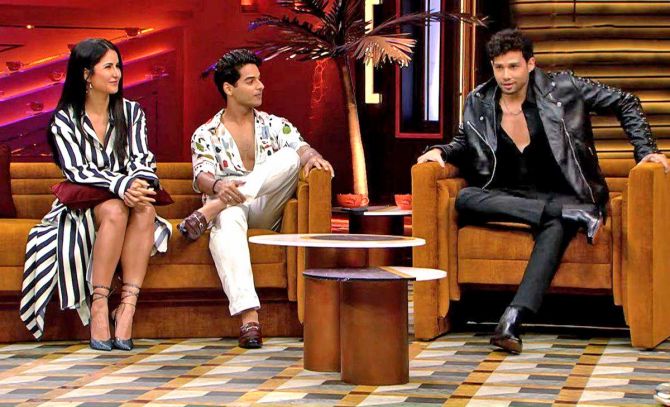 Ishaan and Siddhant’s bromance was quite evident on the show.

Siddhant revealed that Ishaan was the first celebrity, the first blue tick, who reached out to him on Instagram after watching the teaser of Gully Boy.

That’s how their friendship started.

He asked the actor if he had any love interest at the moment, and Sid replied, ‘Right now my work is.’

Just then, Ishaan interrupted and said, ‘Ask him Ananda question.’

Though a subtle hint, it was enough for everyone to figure out that Ishaan was hinting at Navya Naveli Nanda.

Siddhant has been reportedly dating Navya, Amitabh Bachchan’s granddaughter, for a while now.

But he maintained that he’s currently single: ‘I’m so single that the only reason I wanted to be invited for Katrina’s wedding was so that she could introduce me to one of her sisters.’ On the show, Karan discussed Katrina’s recent trip to the Maldives for her birthday and hinted at Ileana’s relationship with Kat’s brother, Sebastian Laurent Michel.

‘On a Maldives trip, some images came out and I was doing the math in my head. I said ‘okay I saw these two (Ileana and Sebastian) meet for the first time in front of me at a party’ and I’m like that moved fast as well.’

Katrina didn’t deny the information and praised Karan for his observational skills.

During a fun game segment, Ishaan was asked to reveal a habit of Katrina’s that he found annoying.

Ishaan said that talking to Katrina is like talking to a wall sometimes: ‘She will be speaking to you and she genuinely listens right when you speak which is lovely, when you’re having a conversation. Looking into your eyes. Except when she stops listening. And it can happen at any given point. So you’re speaking to Katrina Kaif and suddenly you’re speaking to a wall. Like there’s no one there, there’s no person. Like, she is looking at you, but she is looking through you.’ 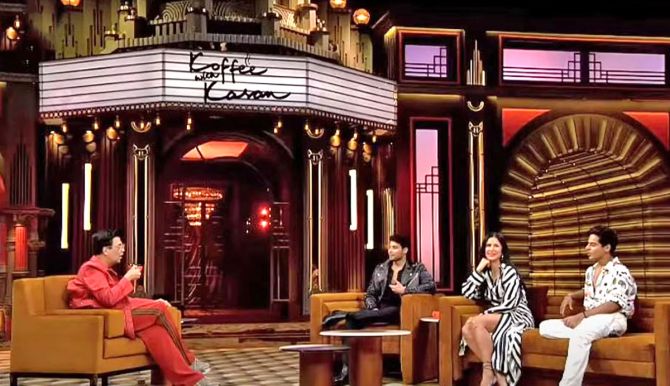 Worst thing Ishaan did as a boyfriend

Though the Dhadak actor lost the Koffee hamper to Siddhant, Ishaan did gave some fiery answers.

When asked the worst thing he has done as a boyfriend, he confessed that he once did not speak to his ex-girlfriend for two weeks straight after having a fight.

When asked what’s the sweetest thing that Vicky has done for her after getting married, Katrina revealed, ‘On my birthday, I was just recovering from being very unwell. I had a very tough time with COVID. He could sense that I was not having a good time and somehow, he just turned the switch. He did a 45-minute concert of every single song of mine and danced entire songs. And everyone sat down, and stopped dancing. Everyone was like, ‘How does he know every step?’ The steps weren’t perfect but he just got the vibe, and danced it through. But the reason behind it was to make me laugh.’

Ishaan admitted to being single on the show and got candid about his ex-girlfriend Ananya Panday, saying, ‘I mean, I would hope to have her as a friend for the rest of my life. She is one of the most wonderful people I have known. She is a sweetheart, she really is. Anyone who has met her would say this. She genuinely is a sweetheart. And all the pulpy questions aside, she is someone who is very dear to me and will always remain so.’ Ishaan has saved Janhvi’s name as…

The last time Ishaan came on the chat show, he revealed that he had saved Janhvi Kapoor’s name on his phone as ‘Are those potatoes’.

This time, when Karan asked the same question again, Ishaan said her Dhadak co-star’s name has now been saved as Janhvi Boney Kapoor.

For those unaware, Ishaan and Janhvi apparently dated briefly before parting ways in 2020.

Siddhant on the nepotism debate

Not too long ago, Ananya was trolled on social media for speaking about her struggles in an interview. In the same interview, Siddhant said, ‘Jahaan humare sapne poore hote hain, wahi inka struggle shuru hota hai.’

This sparked a debate on nepotism and Ananya bore the burnt.

On KWK 7, KJo asked Siddhant about it and he replied, ‘I mean, there was no intention to kind of harm anybody or cause any kind of hurt. I thought it was just my truth and I will always speak my truth because it’s been a bit difficult.’

‘That’s my observation, that was my truth. But having said that, it’s a talk which will keep going on (nepotism). We just can’t keep complaining about it.’