The third episode of the new podcast Love Matters with Evelyn Sharma is out. This episode has Evelyn talking to drag artist and LGTBTQ+ activist Sushant Divgikar. 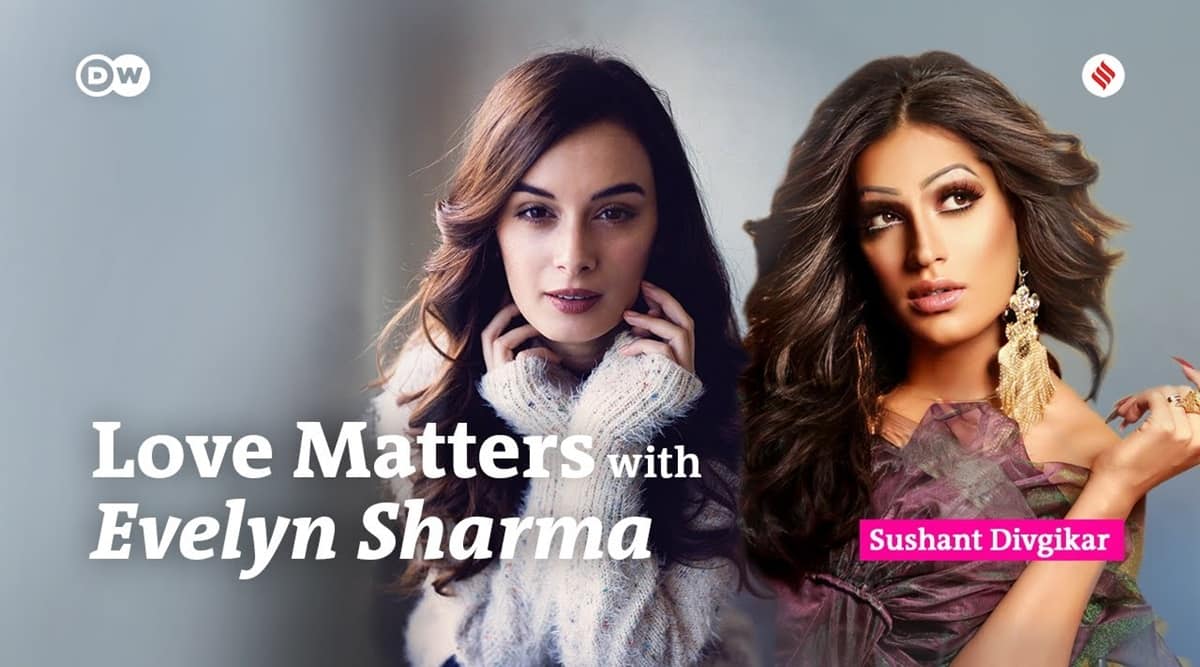 Bollywood actor Evelyn Sharma has turned into a podcast host with Love Matters with Evelyn Sharma. The podcast, co-produced by The Indian Express and DW (Deutsche Welle), discusses relationships, sex, and everything else that impacts people’s lives. In the latest episode of Love Matters with Evelyn Sharma, drag artist and LGTBTQ+ activist Sushant Divgikar opened up about his life, offered advice to listeners and revealed how he came out to his parents ‘three times’.

Sushant recalled how he had been shunned the first time he went for a commercial. However, he didn’t let it deter him, and decided to try out for another audition. He said, “I am a staunch believer in believing in myself. Fifteen years ago, when I went for my first audition for a television commercial, they shunned me for my sexuality. They didn’t even let me audition. I felt attacked. I could have done two things. I could have gone home and never gone for an audition again, or I could have gone back to another audition, which I did in the next week. I gathered myself and the courage to say I exist.”

The LGTBTQ+ activist added, “I respected myself and began honing my skills. I now command attention wherever I go. I am more than just my sexuality. I am a son, brother, child, an artist, a good friend, and I do so many things beautifully. Being homosexual/transgender is just one aspect.”

Sushant Divgikar also explained to listeners that one must not keep worrying about others’ opinions as this could hinder their process of self-actualisation. He said, “All of us have something in us that we need to find. Another person can’t do that for you. So all the conflicts you have in yourself, you need to resolve. You will see the end of the tunnel. But if you choose to let other people’s opinions bother you, what’s going to happen is that you won’t reach actualisation as fast as had you just concentrated on yourself.”

During the podcast, Sushant felt emotional as he said that his parents had always been supportive and celebrated him and his brother, not as their straight or gay child, but just as their children. He revealed that he didn’t tell his parents at first, but it was his brother who went and told them.

The drag artist recalled how the conversation panned out. “I was eighteen, but I didn’t tell them. I told my brother, and he couldn’t keep it in his stomach. I had planned it in my head. It was very dramatised. I looked at the worst case scenario, but nothing of that sort happened. But my brother asked – ‘Do you know Sushant attends gay parties?’ My father, being the rockstar he is, told him to mind his own business. He asked me if I was gay and I said yes. He said, ‘I might not understand it right now, give me some time. But you’re not my gay child or straight child, you’re my child. It’s my duty to bring you into this world and take care of you, and this was the most precious thing I’ve ever heard.’ My mother was a diva. She said, ‘If this is about you being gay, I already know. I am a mother. You think I don’t know?’”

Sushant Divgikar also remembered when he had to explain to his parents that he was gender-fluid. He said, “My mom was fed up. She was like, ‘This is your third time coming out. The first time I came out as gay. Second time, I came out with my drag persona, and she was like, ‘I always knew because you used to keep using my sarees and lipsticks’.’”

Sushant then had to explain what gender-fluid was to them. “I don’t want to be identified just as male and female. I am a trans person. I enjoy celebrating the amalgamation of male and female energies. So they were like, ‘We don’t care. We’ve seen everything.’”

When Evelyn Sharma asked if pronouns are important to him, he said, “For me, personally, I don’t have a problem. I am gender fluid. The type of gender-fluid that doesn’t have a problem with being addressed as he or she or they. They just need to say it with respect.”