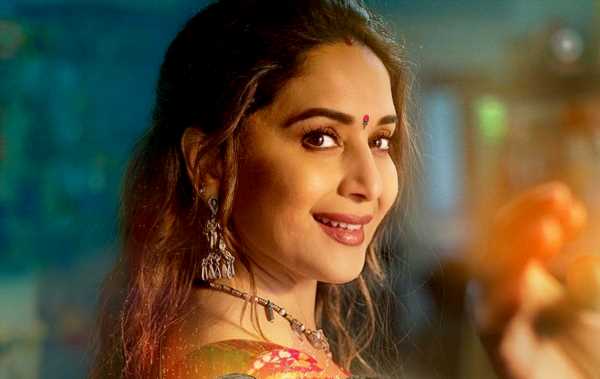 Madhuri Dixit’s brief seems to have been to look glamorous, which she does, while others struggle to hold the film together, observes Deepa Gahlot.

Here’s another film competing in the wokeness race, and stumbling right after the starter pistol goes off.

Maja Ma, directed by Anand Tiwari from Sumit Bhateja’s script, has picked up a crackling idea and turned it into a damp squib.

Perhaps really exploring the placidity of India’s ‘happy family’ middle class would reveal too many lives of quiet desperation, so why go there, when skimming the surface might just please OTT viewers and also flash the makers’s liberal credentials.

Maja Ma is set in a Gujarat town at dandiya time, when Vrindavan Society’s reigning garba queen Pallavi Patel (Madhuri Dixit) is all set to dazzle.

Her US-based son Tejas (Ritwick Bhowmik) in love with NRI princess Esha Hansraj (Barkha Singh), wants to introduce the Patels to the snooty Hansrajs, to seek their approval.

Meanwhile in the Patel home, there is some friction over the daughter Tara (Srishti Shrivastava) living away from her husband to pursue a PhD in gender studies, while she goes about waving the LGBTQIA+ flag with her ‘heterosexual privilege’ as a transgender puts it.

A young stag of the locality, with the help of his cohorts, wants to take over the chairmanship of the society from Pallavi’s husband Manohar (Gajraj Rao). It is not as if that is such an important position to wreck somebody’s life, but let that pass.

Esha’s parents Bob (Rajit Kapoor) and Pam (Sheeba Chaddha) arrive with noses in the air and phony American accents in place, to experience the authenticity of Indian life.

In a very contrived manner, a secret from Pallavi’s past spills out — mentioning what it is would be a spoiler.

The video goes viral, and suddenly everybody is going ballistic, moaning about their reputations.

The Tejas-Esha engagement is about to be called off, Manohar becomes the laughing stock of the neighbourhood, and the Patels face a kind of social boycott.

Pallavi goes about the rest of the film wearing a morose expression but always perfectly turned out and made-up (even when she is sleeping).

Tara’s husband (Malhar Thakar) and in-laws (Simone Singh-Ninad Kamat) turn up, and have no reaction to the bomb that has been chucked in the Patel backyard.

What follows is neither humorous nor tragic or even remotely dramatic.

It is easy to ridicule the hypocrisy of the Hansraj couple, by turning them into caricatures (before Pam touches the food being served, she wants to know that it has been handled by a menstruating woman!).

Manohar, who is the only one with the right to feel betrayed, goes about looking for aphrodisiacs with the help of Tara’s father-in-law, who, just a moment ago was weeping over his wife’s cancer.

Tara makes it about herself because it gives her some credibility but for all her speechifying, she is equally ignorant and insensitive as the rest of them.

Even more incredible is Tejas doing an Internet search and coming up with a jhad-phook exorcist as a solution to the problem.

But this is the level of the film’s humour, like Manohar not knowing the meaning of the word ‘virgin’ and proudly declaring their son and the whole family is virgin. (Just one of the many facepalm moments).

The Hansraj couple who were almost bursting blood vessels with outrage, happily go on a picnic with the Patels and their in-laws.

Bob’s answer to every doubt is a lie-detector test, though why a woman who intends to speak the truth would even submit to it is puzzling.

The film does not know how to take the plot of Pallavi’s predicament (if it can be even called that) further, without any serious repercussions on any of the main players.

So everybody has some kind of individual epiphany, there is a heart-to-heart or two, and by the end, the status quo is maintained. Not even a ripple in the happy family pond!

The takeaway is that if the woman remains a ‘good’ homemaker, and men in the family come out in support, all is well and the dandiya can resume.

The actors are competent enough.

Gajraj Rao, Sheeba Chaddha and Simone Singh get a couple of scenes to shine in.

Madhuri Dixit’s brief seems to have been to look glamorous, which she does, while others struggle to hold the film together.