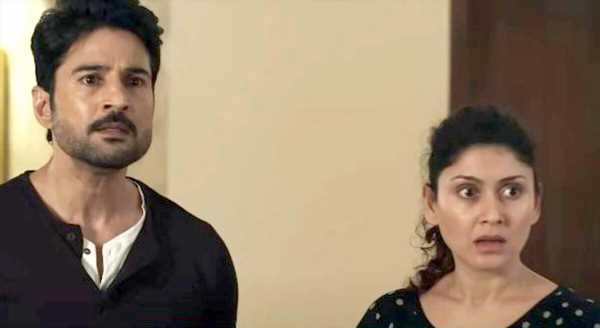 Miya Biwi Aur Murder could have been thrilling and funny. Sadly, it is not, observes Namrata Thakker.

When an estranged couple lands in trouble, they bury their hatchet and team up to save themselves in Miya Biwi Aur Murder.

Jayesh (Rajeev Khandelwal) and Priya (Manjari Fadnnis) are cheating on each other as they aren’t happy in their married lives.

While Jayesh, a senior Mumbai police officer, is sleeping with his maid, Priya, a bored housewife, is having an affair with a young model.

She loves watching all sorts of crime dramas and that eventually pays off.

Without wasting any time or building the characters, the makers dive right into the story in the first episode itself.

Both Jayesh and Priya enjoy their little rendezvous with their partners, only to end up in a messy, chaotic situation.

Priya’s model boyfriend dies in her apartment after a drug overdose and Jayesh is dumbstruck knowing the maid is pregnant with his child.

As she tries to hide the body, Jayesh gets into an argument with the maid and pushes her unintentionally.

The episode ends with Jayesh and Priya having two bodies in their apartment.

On paper, the storyline seems interesting and novel.

But the show falls flat as it tries hard to spruce up the story with comic punches that don’t land.

Yes, the episodes end in cliffhangers, with twists and turns every now and then, leaving you wanting for more.

But overall, the story never reaches a high.

In every episode, you see Jayesh and Priya tackling one problem at a time and that does get boring and predictable after a point.

Thankfully, the episodes are only 20 minutes long.

Rajeev Khandelwal and Manjari Fadnnis try their best to make the show as engaging as possible with their performances. And they succeed to an extent.

But poor execution, not-so-funny dialogues and annoying characters make it hard for them to really shine.

Not to forget, the foul language that is used for no reason throughout the show is jarringly distracting.

Apart from Rajeev and Manjari, the show also features Rushad Rana as a mafioso, but his character doesn’t bring anything to the table.

The rest of the supporting cast is easily forgettable.

Miya Biwi Aur Murder could have been thrilling and funny. Sadly, it is not. 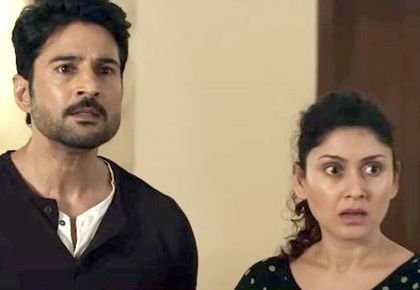