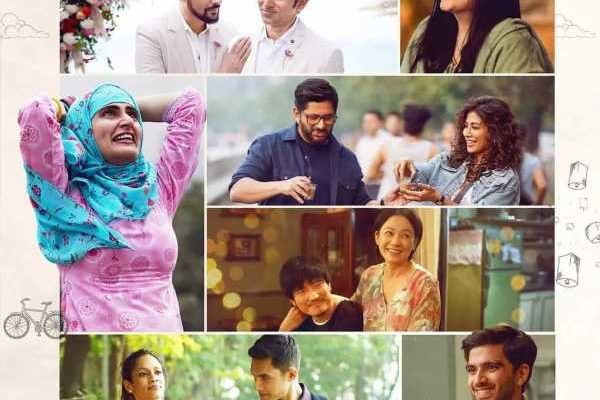 Modern Love: Mumbai has a mostly good selection of stories, and unlike so many other OTT shows that seem to think profanity and sex depict modernity, this one can be watched with the family without any discomfort, observes Deepa Gahlot.

A series of real life stories contributed by people to The New York Times for a column called Modern Love was converted by John Carney into a Web series with the same title.

The first eight-episode season was appreciated and that led to a second season.

The charm of Modern Love lay in the theme, obviously, but also the line-up of well-known stars who played ordinary people sharing extraordinary experiences, that someone, somewhere across the world could relate to.

Romance, parting, heartbreak, grief, letting go, closure are all emotions that reach audiences everywhere, even if an episode or two fell flat.

What the series acknowledged was that the idea of love and relationships have changed down the ages, hence the ‘Modern’ qualifier, that also assumed that audiences have evolved too, and are willing to accept romances that fall out of the chalk line of conformity.

There was a franchise opportunity there, and Pritish Nandy Communications produced the first — Modern Love: Mumbai— with six episodes, an attractive cast and star directors. (A copycat series titled Feels Like Ishq was attempted and forgotten).

Like in the original, there are some check-the-boxes-kind of stories — older woman-younger man, gay lovers, cultural differences, marital boredom — and some unusual and inspiring episodes, like the one about the Kashmiri woman falling in love with her own resilience.

The producers, writers (Devika Bhagat is the overall consultant, but each episode is scripted by different writers), designers must be commended for making Mumbai a part of the viewing experience, but also assiduously avoiding city-of-dreams clichés — no film set story, no train romance, no necking at Marine Drive or bhutta-chomping at Juhu; Ganeshotsav, Kabutarkhana and Dharavi, thankfully don’t make an appearance.

The most charming episode, directed by Vishal Bhardwaj (written by him and Jyotsna Hariharan), is Mumbai Dragon, about a Chinese Tiger Mom Sui (Yeo Yann Yann), whose devotion to her son Ming (Meiyang Chang) manifests in cooking copious amounts of traditional food for him, pushing him to become a dentist like his father, and marry a nice Chinese girl.

But Ming wants to be a singer, and is in love with a ‘vegetarian witch’, Megha (Wamiqa Gabbi), who does not even eat garlic.

Naseeruddin Shah, Imaad Shah and Anurag Kashyap make friendly appearances, in the funny, tender and delicious-looking episode, what will all that gorgeous food on display (shot by Bhardwaj regular Tassaduq Hussain).

In Raat Rani, directed by Shonali Bose (written by John Belanger and Nilesh Maniyar), Fatima Sana Sheikh plays Lali, a lively Kashmiri woman, who works as a nanny, and is married to a security guard, Lutfi (Bhupendra Jadawat).

He abandons her without a by-your-leave one day, giving boredom as a reason.

After initially tottering on a men’s bicycle to get to work, and feeling sorry for herself when the roof of her shanty falls down, Lali works to regain her dignity and fulfill her very small dream of riding over the Sea Link.

Sheikh speaks with a musical Kashmiri accent and brings to the role equal parts sweetness and fierce energy.

Lutfi cannot take her for granted, nor can the city, which gave her courage.

Tanuja is kind of wasted in Baai, directed by Hansal Mehta (written by him and Raghav Raj Kakker, Kashyap Kapoor, Ankur Pathak) in a tiny role as the matriarch of Lucky Manzil, in a family torn by the coming out of their son Manzu (Pratik Gandhi).

Most of the episode is about Manzu’s love story with a chef (real-life chef, Ranveer Brar, who has an attractive screen presence) and his desire to be accepted by his strict father (Talat Aziz).

The performances by the two leading men show the comfort level of today’s actors doing intimate scenes with a same-sex partner, without the fear of wrecking their careers, but the story needed something more to make it stand out.

She has escaped the suburb considered down market by snooty SoBo-ites and goes on dates with a series of self-important men who have trendy careers — crypto consultant, home chef and such-like — only to find a connection with a Thane guy Parth (Ritwik Bhowmik), a simple, clean cut, junior bureaucrat, with whom she ‘feels less judgmental’ about herself.

As she eats missal in ordinary eateries, instead of hanging out at swanky cafes, the viewer can see that you can take a girl out of Thane, but you can’t take Thane out of the girl.

In Nupur Asthana’s Cutting Chai (written by Devika Bhagat), the spark has gone out of Latika’s (Chitrangda Singh) marriage with Daniel (Arshad Warsi).

She is caught in the trap of being a homemaker and mother, stuck on Chapter 7 of the novel she has been working on for years.

When she gets pangs of dissatisfaction with Daniel’s habitual late coming that has come to define his neglect of her, she imagines alternative scenarios to her life and gets her moment of epiphany in that magnificent Mumbai monument, CST station and a trip in a surprisingly empty Harbour Local.

In their meet-cute scene, Arshad Warsi is the ebullient guy, who flirts with unabashed good-humour, the kind of man women say they look for — a man who can make them laugh.

But is that a strong enough foundation on which to build a life?

In the most predictable of the lot, and one that briefly borrows the old car as representative of past memories bit from Modern Love Season 2, Alankrita Shrivastav writes and directs Sarika in My Beautiful Wrinkles. It is like a weak shadow of the Ratna Pathak Shah character in the director’s film Lipstick Under My Burkha.

Rich, kitty-partying Dilbar (Sarika) fantasises about a shy young man, Kunal (Danish Razvi), who is enamoured by her.

There is no possibility of an affair, but the admission of the attraction on both sides, teaches them something about themselves.

Modern Love: Mumbai has a mostly good selection of stories, and unlike so many other OTT shows that seem to think profanity and sex depict modernity, this one can be watched with the family without any discomfort.

The tone is warm and upbeat with a dash of wistfulness.

The depiction of Mumbai from the point of view of slum-dweller to a SoBo matron who has the luxury of wallowing in a tub, conveys that if a denizen of this city has a goal, Mumbai can make it happen, with love playing a catalyst.

With wall-to-wall stars, the one who walks away with this season is the diminutive Malaysian actress Yeo Yann Yann.