‘I have just made a creative film. It has nothing to do with propaganda.’ Omung Kumar claims he’s not a Modi bhakt; he is just a filmmaker who has made a movie on India’s prime minister.

PM Narendra Modi was originally scheduled to release on April 12, a day after the first phase of the 2019 general election. But it became mired in controversy as soon as the trailer released on March 21.

The release date was contested by non-BJP parties and their supporters, who called it propaganist fare that would impact a free and fair election process. The Election Commission asked the makers to release the film after the voting process was complete.

Kumar and the film’s lead actor, Vivek Oberoi, were unhappy with the decision; they claim the film is an inspirational tale of how a chaiwala rose to the most powerful post in the country.

“Modi is a bigger hero than any of our stars. Forget Bollywood, he’s the biggest person even in Hollywood,” Omung tells Patcy N/ Rediff.com.

PM Narendra Modi was scheduled to release before the elections. Vivek Oberoi had then said the timing made perfect sense since the elections would generate interest in the film. Do you feel the change in the release date will affect the film’s ability to make money?

But this is also a good time because on, May 23 (this interview was conducted on May 22), the results of the election will be announced.

Even earlier, this film was targeted at the political environment. It is still relevant.

Nobody can predict the (box office) numbers but it helps if the time is right. There have been accusations that the film is unofficial propaganda for the prime minister. How would you react to such statements?

I have just made a creative film. It has nothing to do with propaganda.

It’s a simple, inspiring story that I wanted to tell and that is what I have done.

A chaiwala has become a PM. Usse bada inspiring story kya ho sakta hai (what can be more inspiring than that)?

It’s unheard of. It’s never happened in the whole world!

Nobody has told us to make this film.

There were producers who have put in the money and this has been going on for three years. It’s just that everything is falling into place now.

I was judging a show with Vivek (called India’s Best Dramebaaz).

Sandip (Ssingh, the film’s producer) had this idea for three years and he approached Vivek, who immediately said yes.

Then, they told me, ‘Why are you not doing (directing it)?’

I said okay because I wanted to tell an inspiring story.

I am not good at politics, so I didn’t want to make a political film.

I wanted to make a inspirational story like all my other films. And that is what I have done. 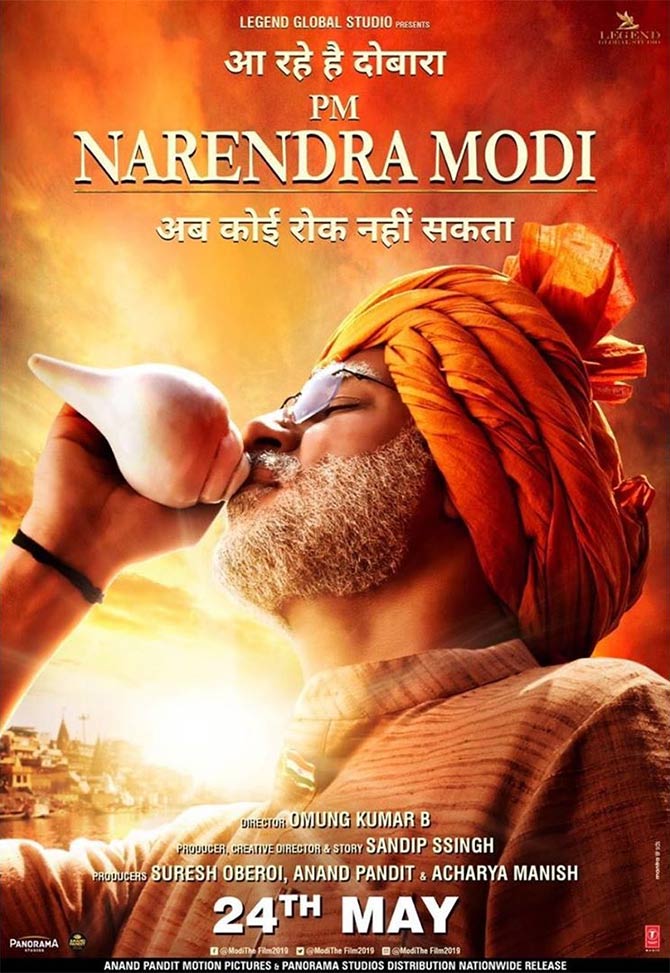 Since this film is about the prime minister of the country, you must have needed permission. How did you go about getting it?

You can make a movie on anybody because it is out on the public platform.

Don’t you need permission to make a film on a person who is alive?

No. If it is in the public domain, it is not required.

Basically, you have to do research and find out about the person — where he stayed, how he looked, how he spoke…

What research did you undertake?

I have spoken to people. I met his old friends, political people.

I read a lot of books on him. He is an open book, everybody knows about him.

Whatever I didn’t know, I spoken to people around him and learnt.

I went to Vadnagar (in Gujarat) and visited his house. It’s not his house anymore.

I spoke to his neighbours. 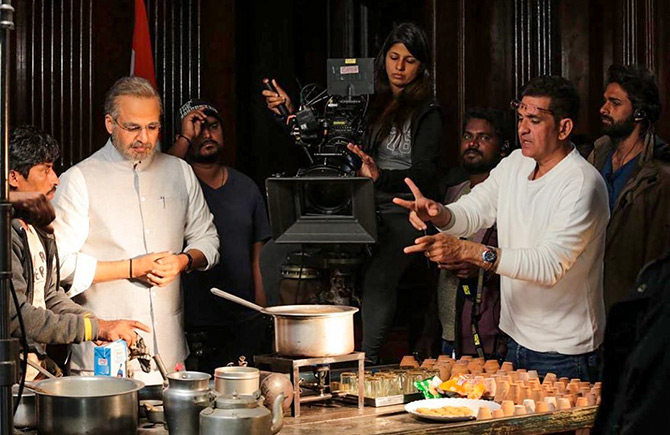 You said you did not want to make a political film. Why did you agree to do this one?

If anybody had said, 60 years ago, that yahan ek ladka aanewala hai, use dhyaan se dekhna (a boy will come here, look at him carefully). Sixty plus years later, this guy will be the prime minister. You would say, what bullshit, it’s impossible.

That intrigued me and that is what I wanted to show.

Politics toh uske surrounding main hai (it’s set amid politics) lekin, for me, the human behind the political persona was more interesting.

How long did it take for you to make this film, right from the inception of the idea?

The inception was done three years ago by Sandeep.

He has been planning since then.

For me, it started last June, when I was judging (the show) with Vivek.

The inspirational quality of the film is what drives me.

I want zero to hero stories, and that’s what this story is all about.

If you see any superhero, they are all zero to hero. That’s what this is.

He’s a bigger hero than any of our stars. Forget Bollywood, he’s the biggest person even in Hollywood.

He’s the biggest person known around the world. The trailer paints Modi as a super-good, super-intelligent, super-patriotic, super-human. Is it an authentic account of his life? How much is cinematic licence and how much is true in the film?

How did you figure from the trailer that I have made him super-human?

You just called him a superhero. I said ‘super-human’ in my question.

He is the biggest hero in the world.

And for me, ek inspiring story hoti hai, toh woh maine bola hai and uske life main yeh sab hua hai (it’s an inspiring story, and I have said what happened in his life).

When you put it in a larger-than-life scale, cinematic visual aa jaate hai, sky background aa jata hai, the flag is flying and all that looks dynamic… but woh sab uske (Narendra Modi’s) life mein hai.

There are downfalls also.

If there are no downfalls, the uprising will not happen.

That would be a flat film for me, like I am making a documentary.

It’s a film and this is how I portrayed it.

So you have to do that.

That is what cinema is about. 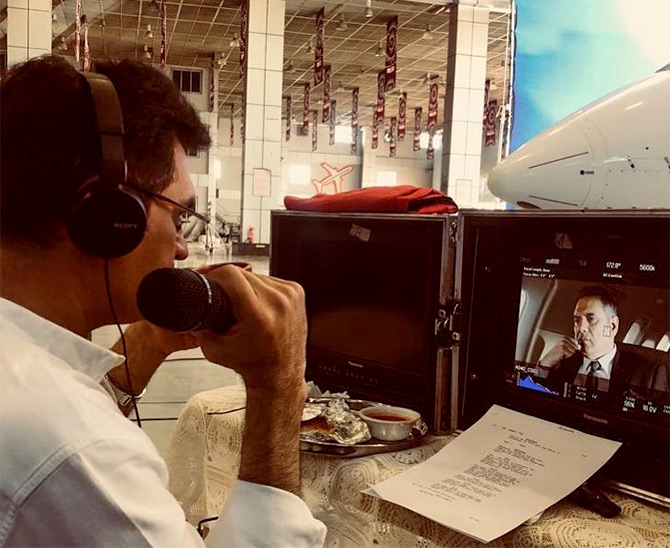 Have you met the PM?

Are you happy with the script and screenplay? Is there anything about the film you are not satisfied with?

It’s a huge responsibility and I love every aspect of what I have done.

It has superseded the way the person (Narendra Modi) is.

It had to justify the worth of the person.

Are you a Modi bhakt?

I am zero in politics.

What about the controversies surrounding him — like the 2002 Gujarat riots? Do they find a part in your film?

Yes, yes, everything is there.

Uske bina downfall aur uprising nahi hota (without it, his downfall and upswing will not happen).

I have shown everything that people are expecting to see.

When he was chief minister, post the Godhra riots, over 1,000 people died on his watch. Did that not bother you?

Everything is there in the film.

I have not created anything. Whatever was in the newspapers, I have shown it. 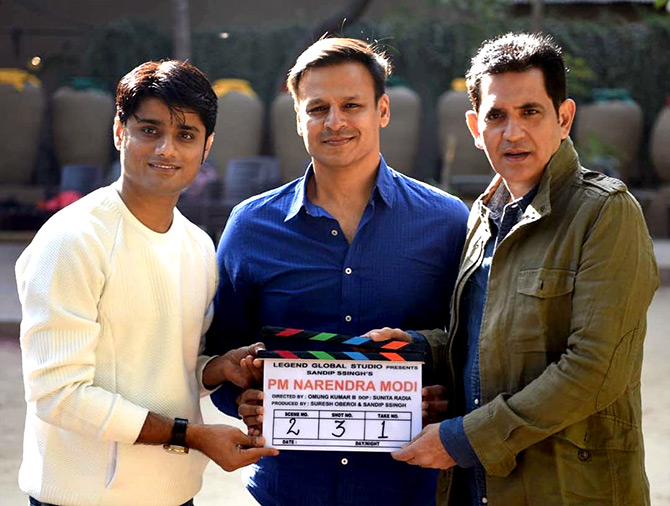 In the trailer, it appears that you are showing Indira Gandhi as a tyrant and Modi as a hero.

Trailer main jo hain wohi film main hai (whatever was in the trailer is in the film).

One of the scenes — where leaflets are flung into the assembly and a bomb is exploded — looks like it has been inspired from Bhagat Singh’s life. Could you explain this scene?

You are putting two and two together.

It’s not a blast.

Did you show the film to the BJP high command? What was their reaction?

The producers have shown the film and everybody loves it.

We didn’t ask for any approvals.

We just showed the film.

Were the BJP or any of the Sangh Parivar outfits present on the sets during the shooting?

No. I have not done a film for anyone.

There was a public showing. People have come and seen the film and liked it.

Why did you not explore Narendra Modi after 2014, when he became the prime minister, particularly since your film is called PM Narendra Modi?

My story is only till he becomes the prime minister.

I have said things that people don’t know about him.

How would you rate Modi’s performance as prime minister on a scale of 1 to 5, with 5 being excellent?

I am not politically inclined, so I cannot rate anyone. 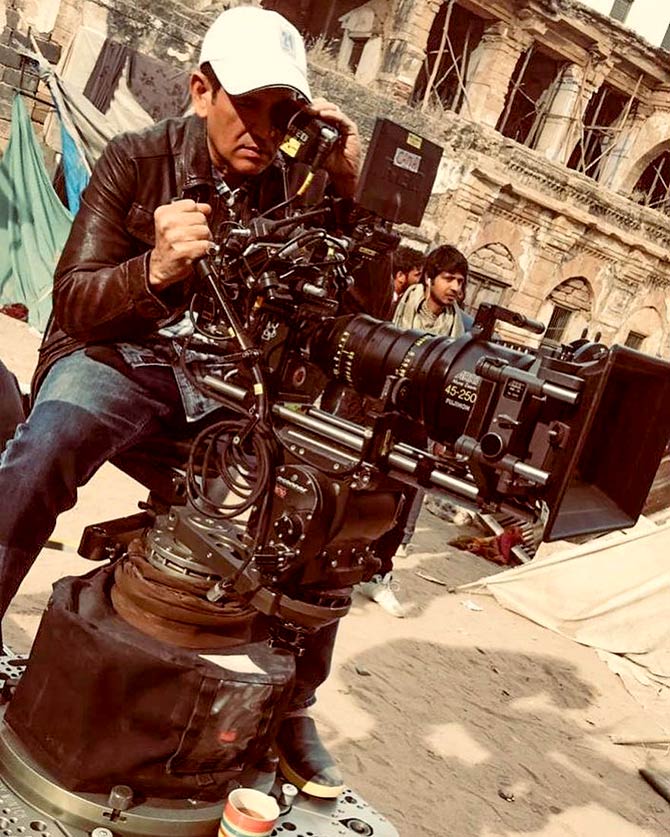 Why did you choose an actor like Vivek Oberoi, who is struggling to find success, to play the most popular politician of our time?

Doing well is not a question.

Meri bhi pichli picture Bhoomi flop hui thi (my previous film was a flop). It’s not about doing well or not.

He is a fantastic actor. He has not been utilised properly until now.

This is his ticket.

Everybody will start working with him again.

He is doing fantastically down south.

Did Vivek do a screen test?

In fact, while doing the prosthetic, we were wondering how he would look like Modiji.

Even if I had taken another actor, I would do a look test, not a screen test.

Vivek Oberoi is disappointed with the industry’s reaction to the film. Why are your colleagues not encouraging your work?

People don’t want to be associated with certain things at times.

They are very strong-minded.

‘Controversy toh nahi hai na? Hamare apne hi controversy chal rahe hai (Is it controversial? We have our own controversies going why), why should we put our hand in this?’

That’s what the people whom we approached were saying.

But when there’s a political angle, people get scared. They should have stood by us, jo hua woh wrong hua (what happened was wrong).

We stand for other films too.

But, all said and done, sometimes some people don’t want to come out because they may get trolled.

Vivek has stepped into controversy after tweeting an Aishwarya Rai meme. Are you worried the negative publicity might impact your film?

It was an error that happened and he has apologised online.

So there is nothing much.

He thought it was funny but it was not. That’s what happened. 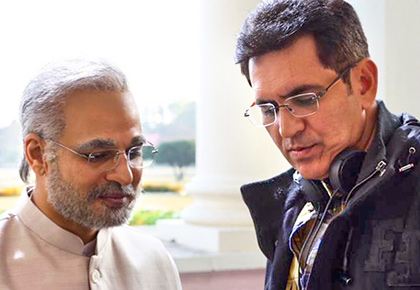