Money Heist season 5 part one starts on a breakneck pace. It is action-packed, heart thumping and unpredictable. If its remaining episodes manage to keep the same flow, the finale season of the Netflix show is going to be explosive. 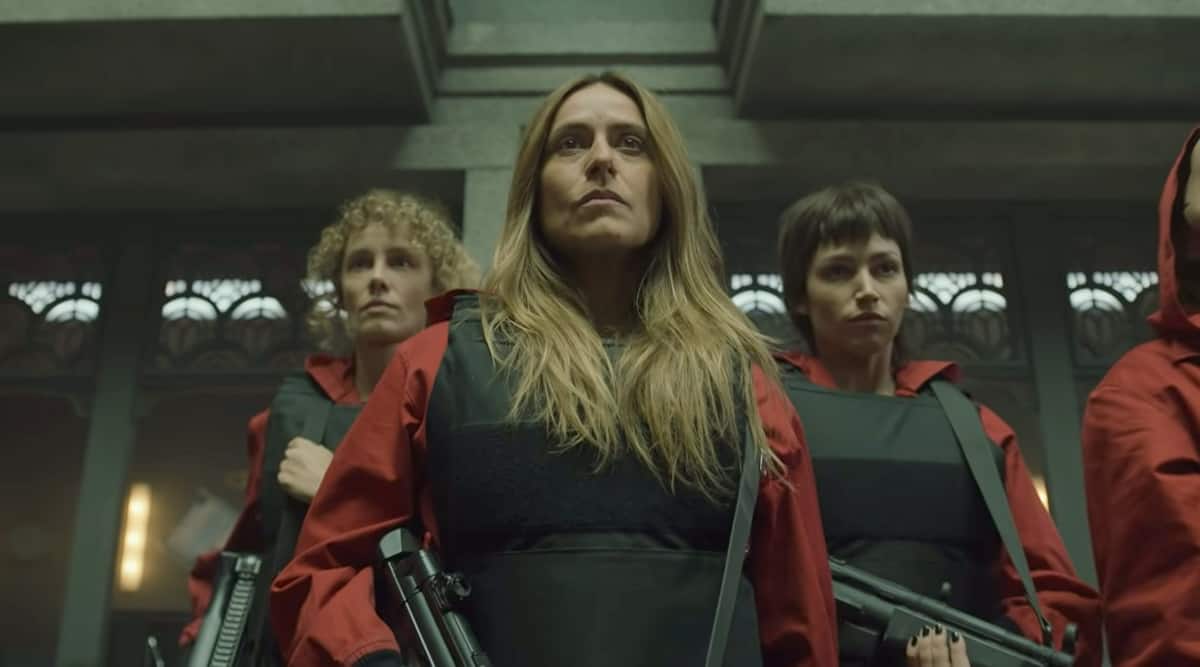 One year is a long time — long enough for a dreaded pandemic to spawn devastating variants, and for regimes to rise and fall. In the world of Money Heist though, the time has not just slowed down, it seems to be frozen. The bullets that were fired in the Spanish show’s season 4 will finally be finding their marks now. But the Netflix show more than makes up for the wait by delivering a lesson in shock and awe. Money Heist doesn’t draw the curtains with its final season as much as it drops a rather heavy grenade and burns the whole thing down. The sexy gang in red jumps right into the action and doesn’t let it drop. You better be prepared for the ride because they are not going to make it easy with you. It is full throttle, baby.

The first episode takes off immediately after Lisbon’s entry into the Bank of Spain, and inspector Alicia Sierra grabbing The Professor from his hideout.

The gang is still reeling under the loss of one of their closest and best, Nairobi, and the news about The Professor being tortured by Alicia should break their spirit? Only, these guys have been trained well and raging for vengeance.

Though the first two episodes don’t tell us much about the actual motive (one can only guess) of Alicia to come after the master planner, we do expect some big revelations going forward. The fact that women get a bigger pie of the series is already well established. Lisbon or “Mrs Professor” is now calling the shots. Infact, after watching the initial episodes of the show, I only remember its women – Lisbon, Tokyo, Stockholm, Manila, and definitely Alicia Sierra. Another thing worth mentioning is the way they’ve cut the starting episodes. We’ve seen a lot of its footage in the trailers and BTS already, just that we never knew who their first set of enemies will be, and how the new characters – Berlin’s son Rafael, Sagasta who is leading the attacking army and Tokyo’s dead boyfriend Rene will weave into the story. Though the way these new faces were introduced suggests they are going to add a lot of dimension to the show.

Some characters encounter a hail of bullets, some lose their patience, some even uncover their vulnerable side. You also find the gang more professional, confident and sturdy as they tote around their rifles. Talk about experience? But I’d say it is a frustrated Colonel Tamayo and a desperate Arturo who get brownie points here for being so good with their parts.

Money Heist is known to rely heavily on flashbacks, time-jumps and characters’ backstories. Its season five is no different. In a close to one-and-a-half-hour I saw, it’s pacy, heart thumping and unpredictable. If its remaining episodes manage to keep the same pace, Money Heist 5 is going to be the show’s most explosive season.