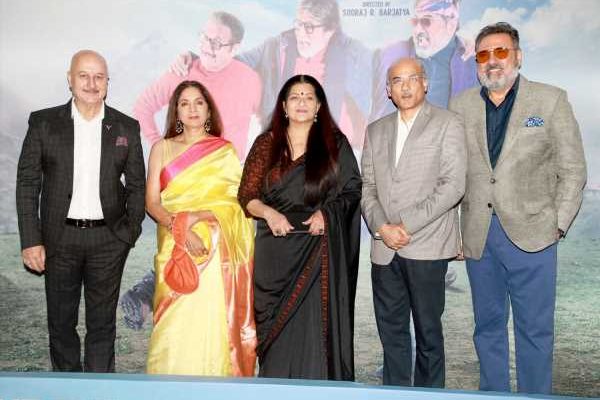 What makes Amitabh Bachchan ‘one of a kind’?

Sooraj Barjatya — one of Bollywood’s most successful film-makers — tries to explain.

“You will know that only after you work with him. Even today, he will memorise a two-page dialogue, and keep practicing dance movements even if his shoulders are hurting. Also, he never has a ‘chalega‘ attitude,” he says.

While Bachchan did not attend the launch, Afsar Dayatar/Rediff.com brings us interesting moments from the event. Then he adds, “This is a romance of another kind.”

“I am petrified of flying,” Anupam Kher reveals.

He shares many moments from the shoot, including the time when his face turned blue after a bath!

How would Sooraj react when he got a perfect shot?

Boman Irani, Anupam, Sarika and Neena Gupta give us a visual in this video!

What does Sooraj Barjatya — the director of films like Maine Pyar Kiya, Hum… Aapke Hai Koun!, and Hum Saath Saath Hai — keep in mind when he makes a film?

Who are Sarika’s, Anupam’s, Boman’s and Neena’s best friends? So many interesting names here.