Remember how she would do all sorts of torturous things to her bête noire bahu throughout the movie?

But in the end, she would come to her senses and throw herself at the daughter-in-law’s feet begging for forgiveness and turn into a shining beacon of love and peace.

Only at its fag end, Raksha Bandhan changes its tune and atones for its previous mindset like a shoddy public service announcement whose only agenda is to put Akshay Kumar on a pedestal.

Pregnant women flock his eatery in hope of birthing a son by gobbling down a gol gappa as guaranteed by its owner.

If the makers had even a bare minimum of interest in making a point about the problem with everybody desiring a boy, they could have shown all four of Kedarnath’s siblings as brothers unable to seek brides because of how this afore-mentioned mentality has led to shortage of women in the world, a Chandni-less Chowk?

Instead, we suffer an outdated chaatwallah fret and fume over his four unmarried sisters like a burden he must immediately get rid of.

As per an illogical, impractical promise he made to his mother on her death bed, he can marry only after marriage of all four sisters.

This results in a long-drawn-out, spectacularly soppy climax and girlfriend Sapna (Bhoomi Pednekar) crying hoarse about her single status in all the scenes.

Only the pretty older sister finds favour with Kedarnath.

Unless they fall in the sundar, susheel bracket, brand them freaks or force them to transform, Raksha Bandhan keenly believes.

The big girl must lose weight, the dark-skinned must slap on the bleach, the Sunny Deol fan must drape in saris and channel all her aggression in chopping veggies.

The worst part is that even in redemptive mode, Raksha Bandhan doesn’t bother addressing any of it.

Mostly though, it’s strange watching Bhumi Pednekar on the other side of the ideology.

After standing up against fat shaming in Dum Laga Ke Haisha and discrimination of the dark skinned in Bala, the actress negates her spunky activism to play a solah saavan observing girl whose only aspiration is to marry Kedarnath and dubs his sisters ‘chudails’ because of their single status.

Speaking of the siblings, they have nothing more to contribute beyond their one-word descriptions.

The young women portraying these characters are probably a lot more talented than Raksha Bandhan (whose real title ought to be ‘I am Akshay Kumar I hog every frame’) gives them credit.

Decades ago, Akshay broke out in the comedy genre playing the street-smart alec with a ready supply of cheeky quips and comic exasperation.

The gig is old and overdone. As is his calculated crusader bit.

Though the girls are still studying, Kedarnath is shown desperate to see them settle down.

Dangerous messaging punctuates every ounce of its storyline wherein dowry is normalised, the kidney is a small price to pay for it and even the kabaadiwalla is a prospective groom in Kedarnath’s undiscerning eyes so long one bites the dust.

Tease his sisters in public though and he’ll make a big hue and cry.

We’ve indulged a good amount of Rai’s slice-of-sassy small town life, its quirky residents and their wilful impulses before but you’ll need a special set of ears and nerves to endure this incessantly chattering, bantering, yelling, sneering, ill-humoured, hyperventilating bunch creating scene after scene on the crowded streets or rundown balconies in the name of chaotic atmosphere.

Neither the whimsical accordion touches in the background score nor its profuse one-take shots can shake off Raksha Bandhan‘s big fat wedding obsession.

In Akshay Kumar’s latest attempt to play male saviour, all roads to a woman’s upliftment begin and end at exchanging vows.

It might kill her but her marital status is her only identity till the end.

It might ruin her chances at a happy, healthy life, but she should wait for her suitor indefinitely, unconditionally.

She may find professional success, but none of it is validated until married.

And then this ode to obsolete values, doffing its hat at Sooraj Barjatya and Rajshri Productions for keeping Indian traditions alive, has the audacity to rip off Dil Hai Ki Manta Nahin‘s super cool father encouraging daughter to flee from mandap sentiment?

It’s only 110 minutes long ,but by the time Raksha Bandhan is done moping over its manipulative melodrama and patriarchal virtue, an eternity has passed. 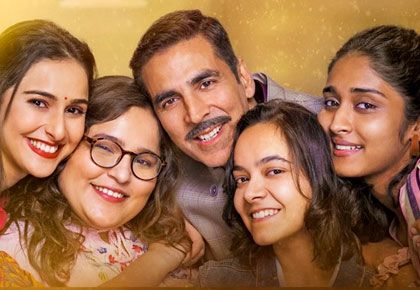