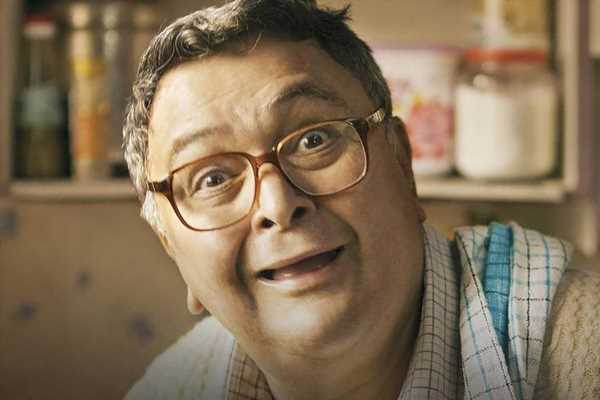 Sharmaji Namkeen is Rishi Kapoor’s swansong and show. His cinematic memories are coloured in liveliest hues of celebration and happiness, observes Sukanya Verma.

Everybody knows the Kapoors love to eat.

But just how much is something I caught a glimpse of a decade ago, when Rishi Kapoor and former NDTV journalist Aneesha Baig spoke food and savoured a multi-course meal at the popular South Mumbai eatery, Bombay Canteen.

I was moved by his child-like excitement as he nibbled on the lotus stem chips, gushed over yakhni pulao and sang nonstop praises of their signature gulab nut — a rum soaked, pistachio cream bursting marriage of gulab jamun and donut. Within a week, I landed at Bombay Canteen and sampled all the yumminess for myself.

Rishi Kapoor’s infectious foodie is tailor-made for the titular description of Sharmaji Namkeen, his final movie.

The actor died on April 30, 2020 while Hitesh Bhatia’s directorial debut was still in mid-production.

A foreword from son Ranbir shares the project was close to his father’s heart and when the choice was between him plastering on prosthetics or Paresh Rawal stepping in to finish the shoot, they opted for the latter.

Though this is not the first instance of posthumous substitutes.

They used a stand-in for Brandon Lee in The Crow.

They rewrote the plot of The Imaginarium of Doctor Parnassus in a way that multiple actors — Johnny Depp, Jude Law and Colin Farrell — could play Heath Ledger’s part.

They did the same for Sanjeev Kumar in Professor Ki Padosan and rendered him invisible one-fourth of the film while Sudesh Bhosle dubbed his lines.

It takes some time to adjust to two actors randomly swapping places in the same role. Often Sharmaji leaves his home as Rishi Kapoor and arrives at his destination as Paresh Rawal.

Both actors are so physically and artistically disparate.

Their combined performance though is akin to a samosa: Where Kapoor is the wholesome, flavourful filling while Rawal graciously forms the necessary pastry cover keeping it all together.

Co-written by Supratik Sen and Bhatia, Sharmaji Namkeen works delightfully on the strength of its sweet, solid heart and generous doses of wit.

In this endearing slice-of-life conveying the mild grievances and monotony of prematurely retired elderly, a 58-year-old widower Brij Gopal Sharma (Kapoor) and his two sons inhabit a typical middle-class neighbourhood in the West of Delhi.

His eldest (Suhail Nayyar) is a bit of a stuffed shirt who works, dates his colleague (Isha Talwar) and wants to buy an apartment in Gurugram.

His youngest (Taaruk Raina) is all play no work.

Punjabi-dominated Delhi suburbs, middle-class woes and whims are a familiar space for Kapoor. He embodies their spirit to perfection in films like Do Dooni Chaar and Bewakoofiyan. But there’s no shadow of those characters in his wide-eyed enthusiasm and universal complaints of ‘Kitna TV dekhoon? Kitna walk karoon?’

Sharmaji Namkeen acknowledges boredom as a genuine problem but doesn’t turn it into an excuse for melodramatic fits.

Sharmaji’s boys are preoccupied and close-minded.

They cannot appreciate their dad’s undeterred spirits even after a VRS is forcibly thrust on his potential or his desire to evolve and explore.

They are embarrassed by his adventurous endeavours and brand new friendships.

Kids can be self-seeking and expect their parents to stay set in their roles, never age, never falter, never alter the status quo.

They simply want him to rest and enjoy his retirement like a good old piece of furniture. So when Sharma’s bestie (Satish Kaushik) recommends the last scene of Baghban be made mandatory watch in every school and college, the upshot is a laugh tinged in truth.

This inoffensive tone of bittersweet reality is Sharmaji Namkeen‘s greatest triumph as it unfolds the droll journey of a man — neither eager nor ready for retirement — finding a perfect outlet for his passion and free time as a specialist cook for kitty parties.

Affluent Punjabi housewives hanging out at each other’s kitschy kothis and exchanging juicy WhatsApp gossip and Tambola wins over chaat and chole is a significantly Delhi attribute.

But Sharmaji Namkeen doesn’t simply mine it for laughs.

These are unapologetically loud and saucy portraits of compromise, happy to focus on fun over the disappointment.

Of the motley bunch, Sheeba Chaddha and Ayesha Raza are reliably spunky and have a ball letting their hair down.

The Chawla-Kapoor pairing has brought much cheer from Bol Radha Bol to Luck by Chance. Sharmaji Namkeen is an ode to their charming camaraderie where Kapoor’s verve and vulnerability is beautifully complimented in her mischief and zest. She is equally tender and heart-warming.

Ultimately though, this is Rishi Kapoor’s swansong and show.

His cinematic memories are coloured in liveliest hues of celebration and happiness.

Sharmaji Namkeen faithfully upholds that imagery in a film that’s as delicious as tribute as it is food for thought.

It’s a pleasure to watch the jolly foodie whip up a storm inside his modest kitchen and pack his cooking tools in a tiny briefcase.

It’s adorable to watch him learn from YouTube videos and make notes in his little diary.

It’s hilarious to watch him SOS his sister-in-law (and the woman threading her brows) and save an over-salted dal from disaster.

It’s heart-warming to watch Mera Naam Joker‘s innocent Raju peek through his shy smile as he sneaks out to see everyone’s reaction to his culinary skills.

It’s a lump-in-a-throat moment to watch him shine and smile against the most iconic song of his career and refuse to give another take in that trademark candour, ‘Bhai, isse better shot nahi ho sakta.’