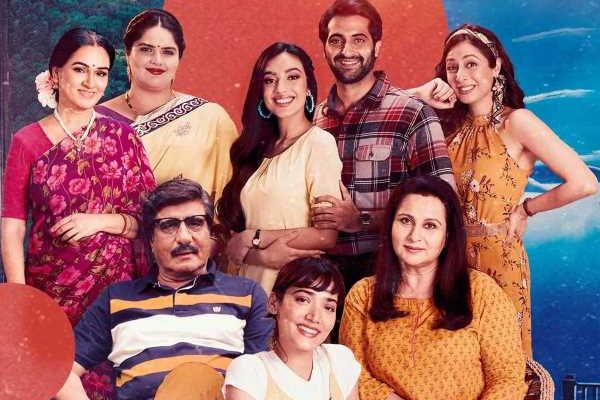 ‘Working with Poonam Dhillon and Padmini Kolhapure again has been a dil bekaraar moment.
‘It was a wonderful thing that our hearts were still aching to work with each other.’

After getting a tele-adaptation in 2015, Anuja Chauhan‘s bestselling novel, Those Pricey Thakur Girls, now has an OTT version on Disney+ Hotstar.

Set in the Delhi of the 1980s, Dil Bekaraar centres on the Thakur family and their differences.

Surprisingly, three of its main cast members have not yet read the novel their show is based on.

“I am glad that I did not read it in advance because if I had, I would have been stuck somewhere while playing my character,” Padmini Kolhapure tells Rediff.com Contributor Mohnish Singh.

“When you read a novel, you create your own interpretation. If somebody has written something in a certain way, it does not mean you should interpret it as it is throughout your life,” reasons Raj Babbar.

“During the pandemic, I remember my sister reading it. She was like, ‘This is really amazing, the novel that I am reading. It’s called Those Pricey Thakur Girls‘,” shares Sahher Bambba.

Tell us something about your characters in Dil Bekaraar.

Raj Babbar: I play a straightforward person who believes in righteousness. He has certain boundaries that he does not want anybody to cross.

He has a very clean image.

He is a justice-loving man in the truest sense.

I am extremely happy that Habib Faisalsaab gave me the wonderful opportunity of playing this character.

I feel really blessed that I am working on such a good show and banner and that too under Faisalsaab‘s direction.

Padmini Kolhapure: I have not done this kind of show before.

It was a challenging character for me to play. But when I came to know that Habib Faisal is the director, I relaxed because I knew he would take care of everything and bring the best out of me.

I always surrender myself to my director so it was great having someone like Habib Sir.

The way it has shaped up is beautiful. It’s going to be a very interesting show not just for people like us who have lived in the ’80s, but also for the younger generation who listen to songs from the ’80s.

It is very intriguing. People want to know (about that period).

Sahher Bambba: It was very exciting because I don’t think you get many chances to play a character set in a specific era.

My character is a newsreader. She loves animals. She is very driven and very progressive.

I resonated with her in a lot of ways.

And, yeah, she’s fun. She has a sweet bond with her sister and her family. It’s fun to watch.

Sahher, the actors you are working with are institutions in themselves. Was it daunting or intimidating to share the screen space with them?

Sahher Bambba: They made all of us feel so comfortable. Within a few days of the shoot, everybody became a family. We would joke around and have fun between shots.

More than intimidating, I would say it has been a great learning experience — watching them perform, seeing what they bring to the table, what they add to the characters, etc, was a great education.

I consider myself extremely fortunate; doing this show was such an enriching experience.

Rajji, please share some of your dil bekaraar moments with us?

Raj Babbar: Working with Poonam Dhillon and Padmini Kolhapure again has been a dil bekaraar moment.

Don’t make me say more because we have become grandparents now (laughs).

It was a wonderful thing that our hearts were still aching to work with each other, with our director and the entire team.

Watch! Padmini makes a wistful visit to the dynamic Eighties

Did Padmini Kolhapure and Raj Babbar go back acting school for this show? Watch the video to find out

Dil Bekaraar is based on Anuja Chauhan’s Those Pricey Thakur Girls. Did you read the novel before shoot for the show or did you just follow the script?

Padmini Kolhapure: I am glad that I did not read it in advance because, if I had, I would have been stuck somewhere while playing my character.

And Habib Sir had advised me against reading the book.

He asked me, ‘Have you read the book?’

Raj Babbar: When you read a novel, you create your own interpretation. If somebody has written something in a certain way, it does not mean you should interpret it as it is throughout your life

I feel that the way our writer-director Habib Faisalsaab has conveyed the gist of the whole novel through the show is very beautiful in itself.

Dil Bekaraar is inspired by that novel, but the way Habibsaab has fleshed out the characters makes them look so complete and perfect.

All we know is that we have worked on a series called Dil Bekaraar.

Anuja Chauhan undoubtedly wrote quite a popular novel back in the time. That novel worked as an inspiration for us actors, for our director and the producers. But what we have done today is the result of Habib Faisal’s imagination.

I hope we all have presented our characters with complete honesty.

In fact, many of my friends and family members told me about the novel even before I got to know that this show was being made.

During the pandemic, I remember my sister reading it. She was like, ‘This is really amazing, the novel that I am reading. It’s called Those Pricey Thakur Girls.’

Within a month or so, I got to know that the casting was happening for the show.

I was intrigued; I really, really wanted to do an author-based character. And I am really glad that it happened with Debjani Thakur.