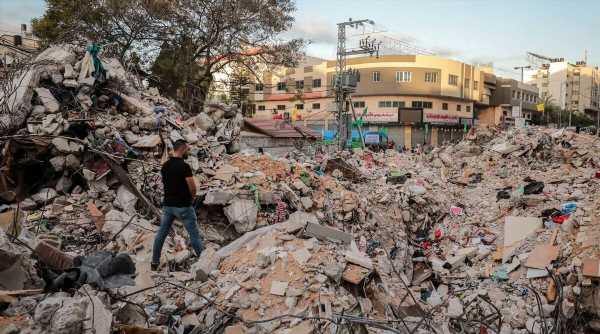 The skies above Gaza and Israel were silent for the first time in 10 days Friday night, after a truce between Israel and Hamas, the militant group that runs Gaza, took effect early Friday. 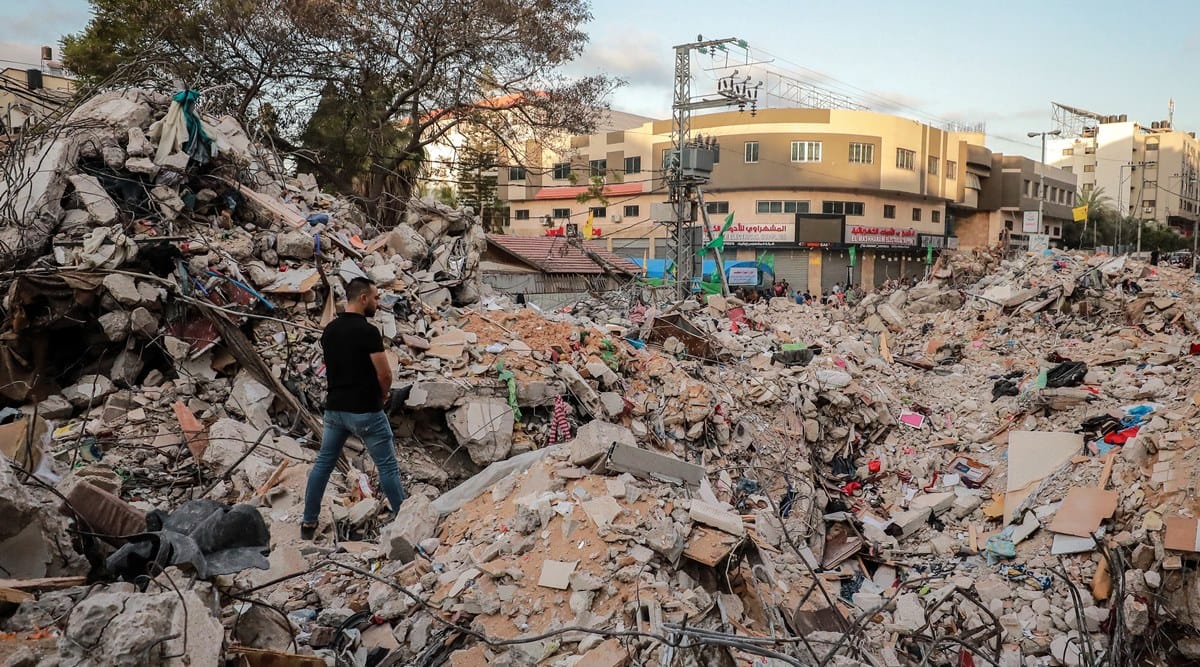 As the first day of a fragile new cease-fire between Israel and Hamas drew to a close, Sami Abul Ouf stood 5 yards above the ground, teetering atop a dense mound of rubble in Gaza City where his sister’s home once stood.

In previous wars with Israel, Abul Ouf waited out the conflict at her apartment. He considered it an unlikely military target — until an Israeli airstrike hit the building on Sunday, killing his sister, Reem, and at least 12 members of their extended family, he said.

“This place used to be a sanctuary,” Abul Ouf, 28, said after clambering down to street level. “But now there is no safety in Gaza. Everyone is exposed to danger.”

The skies above Gaza and Israel were silent for the first time in 10 days Friday night, after a truce between Israel and Hamas, the militant group that runs Gaza, took effect early Friday.

But while Israel could quickly rebound, with authorities reopening roads around Gaza that had been closed during the conflict, the scale of the destruction in Gaza will not allow a return to normality for some time. Central thoroughfares in Gaza City, like Al Wahda Street, where the Abul Ouf family lived, looked like a dystopia. A sea of rubble, several yards high and dozens of yards wide, spread across several streets, blocking half their breadth. A vast crater filled a wide intersection, with a burst sewage pipe gurgling at the bottom.

A burned-out white car, hit by an airstrike this week, remained on the same spot at the seaside traffic circle where it was struck, forcing drivers to edge around it.

The damage in Gaza was incomparable.

Israeli airstrikes killed more than 230 people, destroyed more than 1,000 housing and commercial units, rendered more than 750 others uninhabitable, and displaced more than 77,000 people, according to tallies compiled by Gazan officials and the United Nations. Seventeen clinics and hospitals were damaged, as well as three major desalination plants, power lines and sewage works, leaving 800,000 residents, or nearly half the population, without easy access to clean drinking water, the United Nations added. More than 53 schools were damaged.

The destruction compounds a long-term economic crisis in Gaza, where the unemployment rate hovers around 50%. Israel and Egypt enforce a blockade on Gaza to restrict the flow of weapons and munitions to Hamas, which much of the world considers a terrorist organization. The two countries restrict who and what can enter the enclave, and control much of its energy supply, while Israel alone controls its airspace, maritime fishing rights, birth registry and cellular data. The casualties and damage caused by this month’s war are far less extensive than those wrought by the 50-day conflict in 2014, when Israeli ground forces invaded and more than 2,200 people were killed.

But for many Palestinians, it was enough to give the cease-fire a sense of déjà vu, instead of a feeling of relief. Israel and Hamas have faced off a half-dozen times in the past decade and a half, in confrontations that often caused considerable damage to civilian infrastructure.

“Whenever there is a war in Gaza, it sets us back 20 years,” said Abul Ouf. “Whenever we try to improve the economy, they destroy it.”

Despite the cease-fire, standoffs continued Friday in East Jerusalem and the occupied West Bank. Israeli police raided the Al-Aqsa Mosque compound after Friday prayers, prompting clashes with Palestinians there — in a near replay of confrontations that helped ignite the recent war.

Across the West Bank, Israeli police used rubber bullets and tear gas to repel demonstrators, many of whom carried Hamas flags, as a new wave of protest continued to build. At least 97 Palestinians were reported injured.

For some in Gaza, the cease-fire is a chance to let off steam after nearly two weeks of hunkering down at home. On the beach in Gaza City, families strolled along the shore or gathered at waterfront cafes, many of which were opening for the first time since the fighting started.

“When I see the sea and its rolling waves, I feel there is a change,” said Shahed Abu Khousa, a jobless 25-year-old, as she relaxed at a beach cafe. “I see the hope there.”

But on Al Wahda Street, where the Abul Ouf home once stood, the mood was despondent. Up the street, the Kollak family was mourning its dead at an open-air wake. The family had lost 22 members in an airstrike that hit the same night as the Abul Ouf attack, the survivors said. Just five of them survived.

One, Mohammed Kollak, a 24-year-old shopkeeper who said he spent five hours under the rubble Sunday morning, shrugged at the mention of the cease-fire. What good was a truce, he asked, when his family was already largely dead? And what chance of rebuilding the economy given the blockade?

“A cease-fire doesn’t really have a point,” he said, his arms scarred by his ordeal under the rubble. “The blockade continues.”

Until Sunday, Kollak ran a grocery that stood underneath his home across the road. Now the building has vanished. And scattered among its ruins was a wig, a book of math equations and an onion.

The killing of so many civilians on the same street has led to questions about whether the Israeli army had broken the laws of war by targeting civilian buildings.

The Israeli army said in a statement that it had “struck an underground military structure belonging to the Hamas terrorist organization which was located under the road.” The statement added: “Hamas intentionally locates its terrorist infrastructure under civilian houses, exposing them to danger. The underground foundations collapsed, causing the civilian housing above them to collapse, causing unintended casualties.”