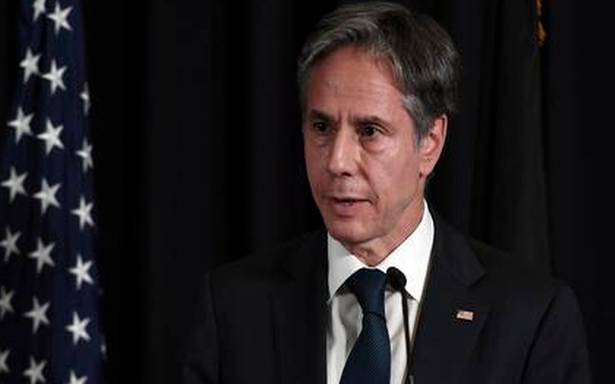 Blinken said the new Afghan government “certainly does not meet the test of inclusivity and it includes people who have very challenging track records.”

U.S. Secretary of State Antony Blinken said Wednesday that any legitimacy or international support for the Taliban “will have to be earned” after Afghanistan’s new rulers announced an interim government that drew a deeply skeptical Western response.

The Secretary of State and his German counterpart met at a U.S. base in Germany that has become a key transit point for evacuees from Afghanistan.

They hosted a virtual meeting of officials from 22 countries as well as NATO, the European Union and UN the day after the Taliban announced their all-male interim government.

Mr. Blinken said the new Afghan government “certainly does not meet the test of inclusivity and it includes people who have very challenging track records.” The administration is stacked with veterans of the Taliban’s hard-line rule from the 1990s and the 20-year battle against the U.S.-led coalition.

Initial responses suggested that it may struggle to win the international support the new leaders desperately need to avoid an economic meltdown.

It includes Sirajuddin Haqqani, who is wanted for questioning by the FBI, as interior minister.

The announcement of a new government came hours after Taliban fired their guns into the air to disperse protesters in the capital of Kabul and arrested several journalists, the second time in less than a week that heavy-handed tactics were used to break up a demonstration.

“Any legitimacy, any support will have to be earned, and we heard that across the board, from everyone participating in today’s session.” U.S. engagement with the Taliban and a new government “will be for purposes of advancing the national interest” and those of partners, and “in ways that are fully consistent with our laws,” he added.

Mr. Blinken and German Foreign Minister Heiko Maas pressed demands for the Taliban to allow Afghans to travel freely and to respect their basic rights, including women’s.

They also pushed the Taliban to ensure that Afghanistan is not used to launch attacks, refrain from reprisal attacks and allow humanitarian access.

Mr. Blinken said the U.S. is still “assessing the announcement” and noted that the Taliban has billed it as a caretaker Cabinet. “We will judge it, and them, by its actions,” he said.

Mr. Maas said the make-up so far of the new government “is not the signal for more international cooperation.” “It must be clear to the Taliban that international isolation cannot be in their interest,” Mr. Maas said.

He added however that no one has an interest in turning their back on Afghanistan and the international community must use what possibilities it can to exert influence on the group.

As for formal diplomatic recognition, Mr. Maas said: “I don’t see it at the moment.” France’s government said the Taliban’s “actions do not match their words.” Foreign Ministry spokeswoman Agnes von der Muhll told an online briefing that France and others had demanded the safe departure of Afghans who wish to leave, free access to humanitarian aid, the “total severing” of relations with terrorist groups and respect for human rights, especially women’s rights.

“We can only note that these demands have not been met,” she said.

Mr. Qureshi told a virtual meeting of countries neighbouring Afghanistan that since Kabul’s takeover by the Taliban, “much dreaded bloodshed has not occurred,” and the prospect of a protracted conflict and civil war seems to have been averted. He said that so far, a feared exodus of refugees has also not taken place.

The situation remains complex and fluid in Afghanistan, however, and it “requires discarding old lenses, developing new insights, and proceeding with a realistic and pragmatic approach,” he said.

Mr. Blinken met with Mr. Maas at the Ramstein Air Base, where he travelled after visiting Qatar, another important staging post in the evacuation effort.

So far, more than 34,000 people have been flown to Ramstein under a transit agreement with Germany, As of Wednesday, about 23,000 people had been flown from Ramstein to the US or other locations. There were about 11,200 people at the base and the nearby Rhine Ordnance Barracks awaiting onward travel.

Authorities say that about 90 people have requested asylum in Germany during their layovers at Ramstein, and officials in both countries say that is in keeping with existing rules and practice. Maas stressed that that is less than 1 per cent of those who have been brought to the base, and that the German-US transit agreement is being respected fully.

Mr. Maas said there are various reasons why those people have sought asylum, for instance that they have relatives in Germany, and noted that the transit operation isn’t expected to last for more than a few weeks.

So he expects that “this situation will remain absolutely manageable.”