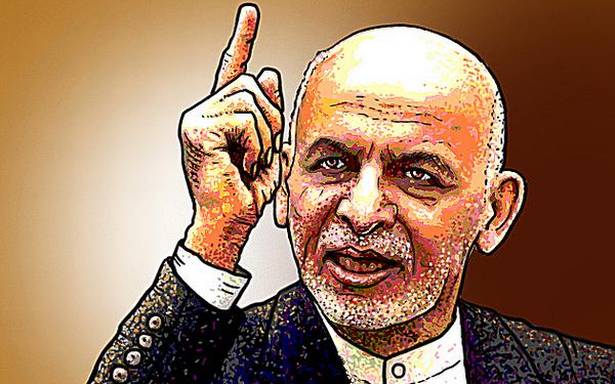 Mr. Ghani is known for his mercurial ways. But a direct public outburst against a foreign government was rare even by his reputation. It shows the desperation of Kabul, which lost swathes of territories to the Taliban, whose top leadership are based in Pakistan. Since May 1, the day the remaining western troops started withdrawing from Afghanistan, the Taliban have taken dozens of districts, especially in the country’s north. The Taliban now control 18 of the country’s 34 provinces and 16 provincial capitals are under direct threat of attacks, according to the Long War Journal. The insurgents have also taken key border crossings such as Sher Khan Bandar with Tajikistan and Islam Qala with Iran. Amid mounting losses and growing uncertainty, Mr. Ghani is visibly under pressure.

A trained anthropologist, Mr. Ghani rose to power in 2014, promising to end corruption and fix Afghanistan’s institutions. This had been his favourite theme for decades. His doctoral thesis at Columbia University, ‘Production and Domination: Afghanistan, 1747-1901’, is a study on the country’s difficulties in building institutions amid economic backwardness. In 2008, a consultancy Mr. Ghani co-founded in Washington, published a paper titled, ‘Fixing Failed States: A Framework for Rebuilding a Fractured World’, which outlined the measures to be taken to build institutions.

In his first presidential campaign in 2009, Mr. Ghani blamed a “double failure” for Afghanistan’s miseries — a failure by the international community and a failure by the country’s elites in rebuilding the nation. So when he was finally elected President in 2014, it was a chance for “Afghanistan’s theorist in chief”, as George Packer called him in The New Yorker, to put his ideas into practice. But ironically, under Mr. Ghani’s watch, Afghanistan’s institutions have further slipped away from Kabul while the Taliban kept making gains.

Born in 1949, Mr. Ghani grew up in Kabul’s old city. His paternal grandfather was a military commander under King Nadir, who assumed the throne in 1929. Mr. Ghani’s father was a senior official in the court of King Zahir, Nadir’s son. In 1973, the year the Afghan monarchy was overthrown by Daoud Khan, who became the first President of the republic, Mr. Ghani received a degree in political science from the American University of Beirut. In 1977, two years prior to the arrival of the Soviet Red Army, Mr. Ghani and his family left Afghanistan, and he would not come back to live in his country until 2001.

When the Taliban regime was overthrown by the Americans in 2001, Mr. Ghani travelled to Afghanistan as a UN official. Later he became a special adviser to Hamid Karzai, who headed the transition government, and then went on to become his Finance Minister. But by 2004, Mr. Karzai and Mr. Ghani fell out and the latter left the government.

The fall of the Taliban and the formation of a democratic state had opened up Afghanistan’s polity for the country’s elite. Like many others, Mr. Ghani also didn’t hide his political ambitions. He quit the government, but stayed active in Afghan civil society. In 2009, he made his first attempt in the presidential election, but failed. In 2014, Mr. Ghani contested again, and was declared winner after a disputed election. In the 2019 elections that saw a record low turnout amid surging violence, he got re-elected.

On both occasions, election disputes with his main rival, Abdullah Abdullah, were settled through talks. But a much bigger challenge Mr. Ghani faces is from the Taliban. He appeared helpless when the Taliban swept through the countryside. The intra-Afghan peace talks haven’t reached anywhere. His administration rejected a proposal from the Biden administration to form a transition government with the Taliban. “Be assured that as long as I am alive, they will not see the formation of an interim government,” Mr. Ghani said in February. But now, his cities are surrounded by the Taliban. The Americans will be out of the country within weeks. Hopes for a political settlement are slim. Mr. Ghani is entering perhaps the most critical phase of his presidency.