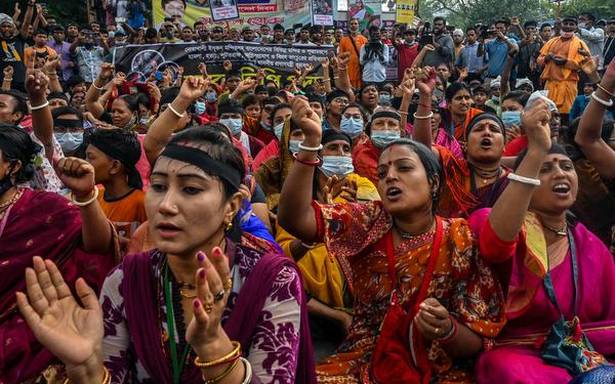 ‘Attacks on minority Hindus are against Bangladesh’s constitutional values’

The attacks on minority Hindus in Bangladesh are against the values enshrined in its Constitution and Prime Minister Sheikh Hasina’s government needs to ensure an impartial inquiry into the incidents, the UN said on Monday. Communal tension continued to remain high in Bangladesh as violence spread to northern district of Rangpur during the weekend.

“Recent attacks on Hindus in Bangladesh, fuelled by hate speech on social media, are against the values of the Constitution and need to stop. We call upon the Government to ensure protection of minorities and an impartial probe. We call upon all to join hands to strengthen inclusive tolerant Bangladesh,” said Mia Seppo, UN Resident Coordinator in Bangladesh.

The developments of the past several days have already drawn international attention. Sources told The Hindu that “all of the community leaders including ISKCON” met the Indian High Commissioner Vikram Doraiswamy at the Indian mission in Dhaka on Monday evening.

The message from the top UN official based in Dhaka was prompted by a nearly week-long spell of communal violence targeting the minority Hindus during the just concluded Durga puja celebrations. The violence reached Pirganj of Rangpur district during Sunday night when a village of fisherfolks in the area was targeted by a group of arsonists.

Late on Sunday, a large number of properties belonging to the minority community were set on fire by groups of people. The attacks in Rangpur followed the script of the incidents that unfolded earlier in Comilla, Noakhali, Chittagong and other areas.

“The incident in Comilla that triggered the violence was orchestrated by some people to disturb inter-community ties and defame our government,” said Home Minister Asaduzzaman Khan to the media.

A reported incident of desecration of the Quran during the Durga puja celebrations in Comilla town went viral on social media last Wednesday, which quickly triggered mob attacks against puja pandals.

On Monday, the situation remained tense in Chittagong and Comilla where some of the worst communal attacks were witnessed that led to the death of at least four attackers in police firing and two devotees of the ISKCON temple in Noakhali district.