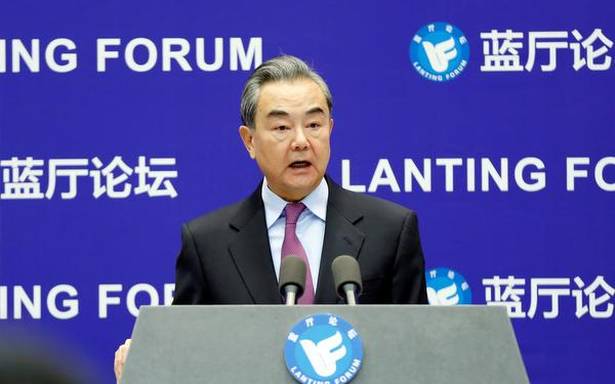 In his annual speech at the Lanting Forum, focussing on China-U.S. ties, Chinese Foreign Minister Wang Yi said the Biden administration should “adjust” the hardline policy pursued by former President Donald Trump towards Beijing to check its growing influence.

“Likewise, we hope the United States will respect China’s core interests, national dignity, and rights to development. We urge the United States to stop smearing the CPC and China’s political system, stop conniving at or even supporting the erroneous words and actions of separatist forces for ‘Taiwan independence’, and stop undermining China’s sovereignty and security on internal affairs concerning Hong Kong, Xinjiang and Tibet,” he said.

“We hope that the U.S. side will adjust its policies as soon as possible, among others, remove unreasonable tariffs on Chinese goods, lift its unilateral sanctions on Chinese companies and research and educational institutes, and abandon irrational suppression of China,” he said.

The relations between China and the U.S. are at an all time low. The two countries are currently engaged in a bitter confrontation over various issues, including trade, the origins of the novel coronavirus pandemic, the communist giant’s aggressive military moves in the disputed South China Sea and human rights.

In a CNN town hall on February 17, Mr. Biden said he stressed to Mr. Xi during their long conversation that the U.S. would continue to assert its role as a voice for human rights on the world stage, including at the United Nations and other international agencies.

“We must speak up for human rights. It’s who we are,” the Hong Kong-based South China Morning Post quoted Mr. Biden as saying.

“There will be repercussions for China, and [Xi] knows that,” he said.

“China is trying very hard to become the world leader and to get that moniker, and to be able to do that, they have to gain the confidence of other countries. And as long as they’re engaged in activity that is contrary to basic human rights, it’s going to be hard for them to do that,” Mr. Biden, whose administration is formulating its China policy reconfiguring the one followed by Mr. Trump, said.

Mr. Biden, who met Mr. Xi a few times when both were Vice-Presidents, had said earlier said that Mr. Xi lacked ‘D’ bone meaning the democratic bone highlighting the autocratic style of the Chinese President, who has emerged the most powerful leader after Mao Zedong after he took over power in 2012.

Besides challenging China on various fronts, including on the origins of coronavirus, Mr. Trump launched sanctions on trade with Beijing and banned Chinese tech firms like Huawei, TikTok.

In his speech, Mr. Wang said it is important to step-up dialogue and properly manage the differences between the top two economies of the world.

“Given the differences between our two countries in the social system, development stage, history and culture, it is natural for us to have disagreements. What is crucial is to enhance mutual understanding through dialogue and not allow our relations to be defined by disagreements,” Mr. Wang said.

“Over the past few years, the United States basically cut off bilateral dialogue at all levels. And this was one of the main reasons for the deterioration of China-U.S. relations,” he said.

He said both sides should follow up on the phone call between the two Presidents, act in the “fundamental interests of the two peoples, take a forward-looking, open-minded and inclusive attitude, and reactivate or establish dialogue mechanisms in various areas and at various levels”.

They should also engage in candid dialogues on a broad range of issues to explore effective ways to manage sensitive issues, ward off risks and remove obstacles, he said.

“China is, as always, open to dialogue. We stand ready to have candid communication with the U.S. side, and engage in dialogues aimed at solving problems,” he said.

Mr. Wang spoke at the Lanting Forum, a platform initiated by the Chinese Foreign Ministry to promote communication and exchanges between government, the business community, academia, media and the public.