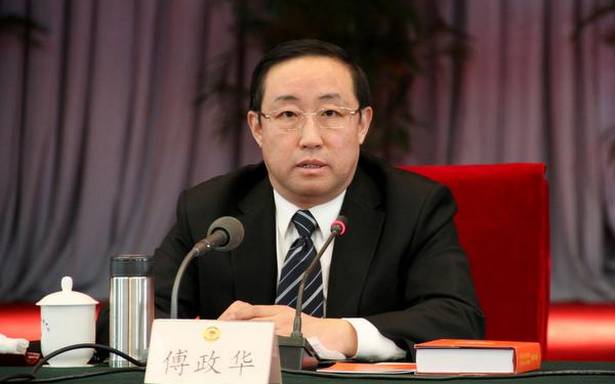 Fu Zhenghua is probed for ‘violation of discipline and law’

Authorities in China announced on Saturday they were investigating the country’s former Justice Minister, the latest senior cadre to be drawn into Beijing’s sweeping anti-corruption drive.

A growing number of top Communist figures have been caught up in President Xi Jinping’s anti-corruption campaign, which critics say has also served as a way to remove the leader’s political enemies since he came to power in 2013.

Fu Zhenghua — who has held key roles in Beijing including Minister of Justice and head of the Public Security Bureau — is being investigated for “serious violation of discipline and law”, according to a statement.

Once Beijing’s top police official, Mr. Fu is thought to have led the corruption investigation into Zhou Yongkang, the former security czar who was jailed in 2015 in one of the campaign’s most high-profile cases. But he is now facing his own investigation by anti-graft body, the Central Commission for Discipline Inspection (CCDI).

Mr. Fu is currently the deputy director of the social and legal affairs committee on the standing committee of the largely ceremonial advisory body, the Chinese People’s Political Consultative Conference (CPPCC).

The CDDI’s statement comes just days after the former deputy public security minister Sun Lijun — who oversaw security in Hong Kong during months of unrest — was expelled from the party for corruption.

More than a million officials have been punished under the anti-corruption campaign so far, which has been a cornerstone of Mr. Xi’s tenure.