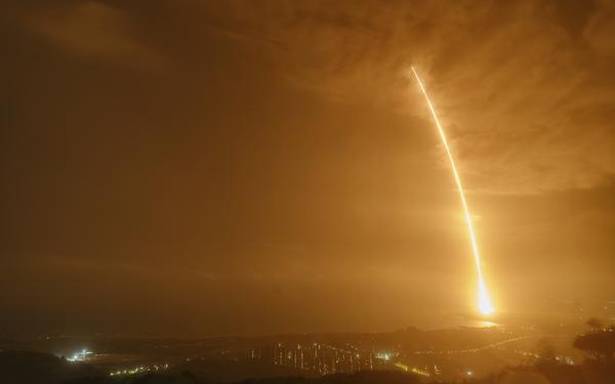 This will be followed by the launch of another cargo spacecraft, Tianzhou-3, and two manned missions, Shenzhou-12 and Shenzhou-13 later this year.

China took another step towards completing the construction of its first space station by the end of next year following the launch and docking of a cargo spacecraft early on Sunday.

The Tianzhou-2 cargo spacecraft, described by China’s state media as “the delivery guy for China’s space station”, was launched late on Saturday on a Long March-7 rocket from the island of Hainan, and docked eight hours later with the space station’s first core module called Tianhe, or “heavenly harmony”.

The launch was a third landmark for China’s space programme in recent weeks. China landed a spacecraft in Mars on May 15 carrying its first Mars rover, Zhurong. The Tianhe module, which the cargo spacecraft docked with on Sunday, was launched on April 29.

The Tianzhou-2 spacecraft carried a range of supplies, the China Manned Space Agency (CMSA) said, and will be followed by the launch of another cargo spacecraft, Tianzhou-3, and two manned missions, Shenzhou-12 and Shenzhou-13, later this year, each carrying three astronauts who will spend several months in orbit. The Shenzhou-12 launch is slated for mid-June.

The six missions to follow this year, including for the space station’s second and third modules, Wentian and Mengtian, will close to complete the construction of China’s first space station, expected to be finished in 2022.

The CMSA said Tianzhou-2, with a maximum takeoff weight of 13.5 tons and 6.9 ton-payload capacity, is the largest cargo spacecraft in service. The spacecraft is carrying cargo and propellant that will replenish the supplies of the Tianhe module, the agency said.

Official broadcaster China Global Television Network said its supplies include food for the crew that will follow in the Shenzhou-12 and Shenzhou-13 missions, including “famous stir-fried Chinese dishes like shredded pork with garlic sauce and Kung Pao chicken.”