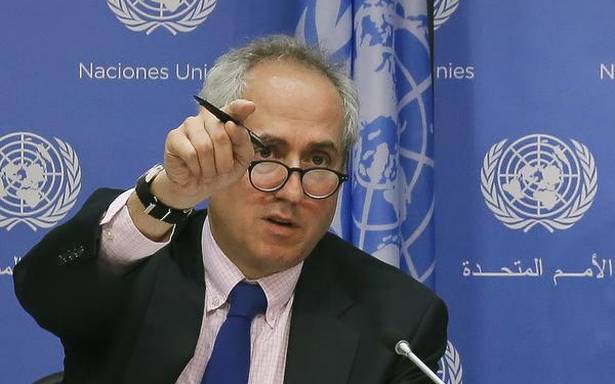 India, one of the largest troop-contributing countries to UN peacekeeping missions, gifted 2,00,000 doses of COVID-19 vaccines for UN peacekeepers across all UN missions.

The 2,00,000 COVID-19 vaccines gifted by India for all UN peacekeepers are “already being put to use” and a number of these Blue Helmets have already been vaccinated, spokesperson for UN chief Antonio Guterres has said.

“The Indian government…had offered us… 200,000 doses…And a number of peacekeepers are already, as far as I know, being vaccinated,” Stephane Dujarric, spokesperson for the Secretary-General, told reporters at the daily press briefing on Friday in response to a question on vaccination of the UN peacekeepers.

India, one of the largest troop-contributing countries to UN peacekeeping missions, gifted 2,00,000 doses of COVID-19 vaccines for UN peacekeepers across all UN missions.

As of March 31 this year, there are 87,889 personnel serving in 12 peacekeeping operations around the world.

“Keeping in mind the UN Peacekeepers who operate in such difficult circumstances, we would like to announce today a gift of 2,00,000 doses for them,” Mr. Jaishankar had said while addressing the UN Security Council open debate on the implementation of resolution 2532 (2020) on the cessation of hostilities in the context of the COVID-19 pandemic.

Quoting the Bhagavad Gita, Mr. Jaishankar had said “Do your work with the welfare of others always in mind.” The 2,00,000 doses essentially meant that it would be possible to administer the required double doses of COVID vaccines to all UN peacekeepers across missions. The AstraZeneca vaccines had left Mumbai via Qatar Airways on March 27.

The shipment went to Copenhagen, where it was safely stored in a facility, re-packaged and quickly distributed to all peacekeeping missions for the peacekeepers.

On a question on the offer of vaccines to the UN from China, Mr. Dujarric said “we continue to be in touch with the Chinese authorities, as we are with the Russian authorities. Some of that had to do with which vaccines were already approved by the WHO (World Health Organisation) because we do not use vaccines that are not approved by the WHO.” He said the Secretary-General has directly expressed his gratitude towards Russia when he was in Moscow recently and has also thanked the Chinese for their offer.

“I mean, we’re very fortunate that we have member states who are willing and able to give vaccines to UN staff working in the front lines to ensure that we continue to do our work,” Mr. Dujarric said. He added that it was also important to note that even before the vaccines were available to “some of our colleagues in the field, they had been continuing to do their work…” Mr. Dujarric welcomed the announcement made by the Biden administration that it will be sharing millions of vaccine doses with both the COVAX facility, as well as bilaterally with countries in particular need.

COVAX is a worldwide initiative aimed at equitable access to COVID-19 vaccines directed by Gavi, the Vaccine Alliance, the Coalition for Epidemic Preparedness Innovations, and the World Health Organization.

“But I also want to add that the Secretary-General is extremely grateful to the United States Government for the inclusion of United Nations personnel and Member States delegates serving in the United States in its national vaccination programme, and for the generous offer to provide vaccines for United Nations front-line personnel serving in the most challenging and dangerous locations around the world.”

“This donation will allow the UN staff to stay and deliver critical services to vulnerable people around the world in a safe and effective manner,” he said.

He added that Secretary-General renews his call to the international community to come together to address the unprecedented challenge of this pandemic, and for countries to share vaccines, particularly with those that are struggling to cope with new surges and variants.

“There is an urgent need for increased global solidarity to ensure that vaccines are available to everyone, everywhere. Equitable access to vaccines is a prerequisite for [ending] the pandemic and kick-starting a strong recovery.” On a question on the Biden administration’s announcement to give vaccines to front-line UN staff, he said the UN is in touch with the US Mission to work out those details, including the numbers.

“My understanding is that this will be a Johnson & Johnson one-and-done, as they say. But we’re trying to get a bit more details, but we’re very thankful for this offer.”