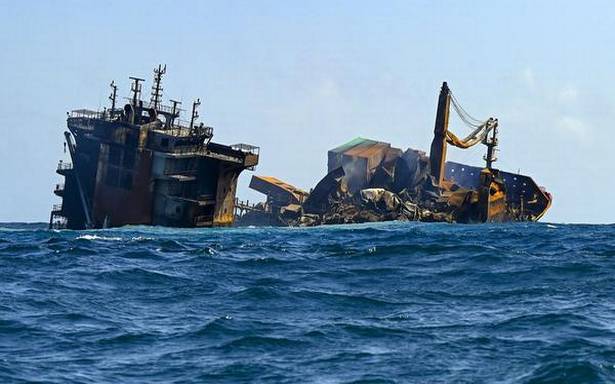 Marine experts in Sri Lanka recovered the data recorder of the Singapore-flagged fire-stricken cargo ship sinking slowly off the country’s capital, officials have said as authorities appointed a panel to look into the impact of the incident on the marine environment.

There were no signs of oil or chemical spills have detected so far, Sri Lanka Ports Authority said in a statement on Saturday.

Sri Lankan Navy, Indian Coast Guard, salvos and local authorities capable of responding to any signs of oil pollution or debris are presently on the scene and are keenly monitoring the situation around the clock, the statement said.

Experts from the Merchant Shipping Secretariat with the assistance of the Sri Lanka Navy on Saturday recovered the Voyage Data Recorder or VDR commonly known as the “Ship’s Black Box” of MV X-Press Pearl.

The cargo vessel, carrying a consignment of chemicals and raw materials for cosmetics from Hazira in Gujarat caught fire on May 20 in Sri Lankan waters outside the port of Colombo.

All 25 crew members of the ship — of Indian, Chinese, Filipino and Russian nationality — were rescued on May 21.

The recovered VDR is now been handed over to the local law enforcement agencies to assist ongoing investigations.

A team of 14 experts from the Government Analyst’s Department has been appointed to look into the impact of the fire aboard the ship on the marine environment. They will collect seawater samples to assess the impact.

Meanwhile, the aft or stern portion of the distressed ship is remaining on the seabed at a depth of about 21 meters, and the forward section continues to settle down slowly, the statement said.

An initial inspection has been carried out by divers to assess the condition of the hull.

Sri Lanka’s Criminal Investigations Department has so far recorded statements from about 20 crew members and officials on the incident.

The has taken custody of the vessel’s VDR.

The Maritime and Port Authority of Singapore on Thursday started its own investigation into the massive fire on the chemical-laden cargo vessel, sailing under the country’s flag.