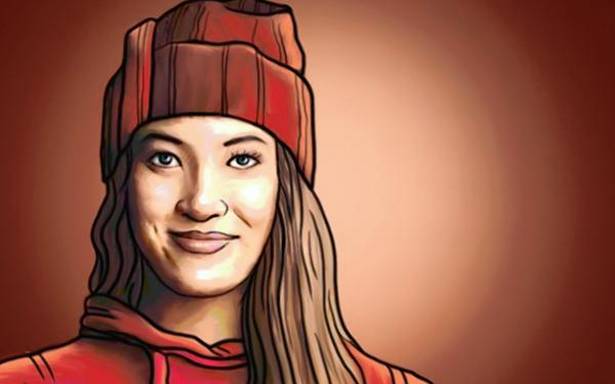 How a U.S.-born athlete became the face of China’s Winter Olympics

When Gu (18), on February 8, spectacularly skied her way to a gold medal with a stunning freestyle performance — she not only became the youngest ever gold medallist and China’s first Winter Olympics champion but also the first to carry out a “double cork 1620” that requires a gravity-defying four-and-a-half rotations while in mid-air — so many messages flooded China’s social media site Sina Weibo, a Twitter equivalent, that the site crashed. The win in Beijing this week has established Gu as China’s pre-eminent sports star, and not just in the Winter Games. Her journey to the top, however, has not been without its twists and turns.

Eileen Gu — or Gu Ailing, as she is known in China — was born in San Francisco in 2003 to an immigrant Chinese mother in the U.S. Her mother, Yan Gu, worked as a venture capitalist and attended Stanford University. By age 15, Gu had already become a fast-rising star, representing the U.S. in international competitions. Her story took a surprising turn in 2019, when she stunned the skiing world by announcing she would no longer compete for the U.S. but for the country where her mother was born.

For China, her switch has already paid rich dividends, both on the slopes and off, where the optics of a U.S.-China switch has been milked by the media. “The choice of Chinese nationality,” foreign affairs professor Li Haidong told the Party-run Global Times, “reflects Gu’s belief that conditions in China are more conducive to personal development”, although it’s a different matter that Gu will continue to live in the U.S. and will, in the coming year, attend Stanford. But more than the optics, it is Gu’s undeniable talent that is at the heart of her overnight stardom in China. Her skills have already lit up the Beijing games, and her gold win received wall-to-wall coverage. It has, of course, also paid rich dividends for Gu, who now boasts a string of commercial endorsements in China.

With the fame, intense attention on her life has followed. In China, the media have promoted her as a role model, with reports detailing her dedication to training on the slopes and in the classroom. Newspapers have pointed out she scored a high 1580 on her SAT college entrance exams while the maths tuition centre she briefly attended one summer in Beijing has become both a tourist spot and in-demand for Chinese parents. The nationality issue does, however, remain a point of controversy — at least in the U.S., where she has been under fire for her decision to switch. It does, however, remain unclear if Gu has given up her American passport. During the Olympics, she batted away questions about whether she has done so. China does not allow dual nationality. Gu this week hit out at the criticism in the U.S., saying she was not going to “waste my time trying to placate critics” and that her broader goal was to become “a connection between countries and not a divisive force”.

Where she has, no doubt, succeeded is in popularising the sport in China. But if Gu has become a star in her now adopted country, others who have made the switch haven’t necessarily been similarly embraced. Two days before Gu’s win, another California-born athlete Beverly Zhu, who joined the Chinese team and changed her name to Zhu Yi, faced intense criticism after crashing during her figure skating event and leaving the arena in tears. Thousands of abusive messages flooded social media, the website What’s on Weibo reported. “Fame is a double-edged sword,” the website quoted one commenter as saying. “Your success can be magnified to an extreme,” the post said, “but your mistakes can also be enlarged without boundaries.”