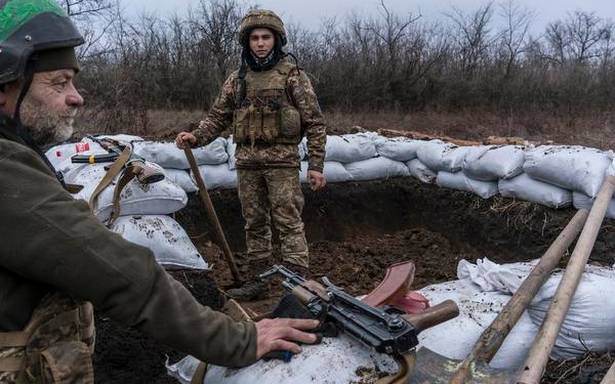 European Foreign Ministers slapped sanctions on Russian mercenary outfit Wagner on Monday and drew up what they warned would be an unprecedented economic response to any military assault on Ukraine.

Following a meeting of G7 Ministers in Liverpool at the weekend, where the U.S. and major allies warned the Kremlin of “massive” consequences if it invades, the 27 EU Ministers met on Monday in Brussels.

They first approved a list of eight names and three companies associated with Russia’s private military company Wagner to be added immediately to existing sanctions regimes.

Next, they were to agree terms to signal their readiness to impose huge new measures targeting Russia’s economy if a troop build-up near the Ukrainian border leads to direct military action.

The Ministers were also expected to discuss whether or not European capitals should join a U.S.-led diplomatic boycott of the Beijing Winter Olympics in February, to protest alleged Chinese rights abuses.

“Yesterday we had the G7,” EU foreign policy chief Josep Borrell said, arriving at the talks.

“There was a strong agreement, position in order to have a strong stance behind Ukraine, defending their sovereignty and territorial integrity.

“We will send a clear signal that any aggression against Ukraine will have a high cost for Russia,” he said, insisting that Brussels will coordinate any action with London and Washington.

Lithuania’s Gabrielius Landsbergis stressed that the sanctions threat was a deterrent but that, if they proved necessary, they would have to be on an “unprecedented scale”.

Berlin holds one of the most important cards in the sanctions deck, if it decides that President Vladimir Putin’s actions warrant blocking the Nord Stream 2 gas pipeline from Russia to Germany.

Asked about the threat to Ukraine before heading to Brussels, Ms. Baerbock told ZDF television that “in the event of further escalation, this gas pipeline could not come into service.”

Separately, in a sign of Brussels’ determination to address what it sees as the Kremlin’s efforts to “destabilise” Ukraine, Syria, Libya and several African countries, sanctions were slapped on Wagner.

Wagner is said to be financed by 60-year-old Saint Petersburg businessman Yevgeny Prigozhin, who has already been hit with EU and U.S. sanctions for destabilising Libya and meddling in US elections.

In addition to the Wagner firm and three linked companies, the sanctions list targeted eight individuals, including the group’s alleged commander.