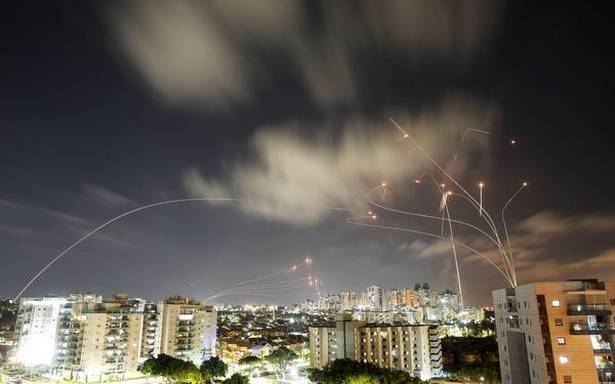 The Iron Dome aerial defence system just intercepted a Hamas Unmanned Aerial Vehicle (UAV) that crossed from Gaza into Israel, Israeli Defence Forces (IDF) said around 1 p.m. IST on Friday morning on social media. IDF said on Thursday that in the last three days, Hamas has fired more than 1,500 rockets from Gaza all the way into Israel. The night sky over Israel has been ablaze with interceptor missiles from Iron Dome shooting down the incoming rockets in the sky.

What is Iron Dome?

Iron Dome is a multi-mission system capable of intercepting rockets, artillery, mortars and Precision Guided Munitions like very short range air defence (V-SHORAD) systems as well as aircraft, helicopters and Unmanned Aerial Vehicles (UAV) over short ranges of up to 70 km. It is an all-weather system and can engage multiple targets simultaneously and can be deployed over land and sea.

Iron Dome is jointly manufactured by Rafael Advanced Systems and has been in service with Israeli Air Force since 2011. The radar system was developed by Elta. Its development was prompted after a series of rocket attacks on Israel by Hezbollah and Hamas in the 2000s. In the 2006 Lebanon war, around 4,000 rockets were fired on the northern parts of Israel resulting in the death of about 44 Israeli civilians and the evacuation of around 250,000 citizens.

How does it work?

An Iron Dome battery consists of a battle management control unit, a detection and tracking radar and a firing unit of three vertical launchers, with 20 interceptor missiles each. The interceptor missile uses a proximity fuse to detonate the target warhead in the air. The Iron Dome is deployed in a layered defence along with David’s Sling and Arrow missile defence system which are designed for medium- and long-range threats.

According to a 2013 research paper by Yiftah S. Shapur on the Lessons from the Iron Dome in Military and Strategic Affairs, one of the system’s important advantages is its ability to identify the anticipated point of impact of the threatening rocket, to calculate whether it will fall in a built-up area or not, and to decide on this basis whether or not to engage it. This prevents unnecessary interception of rockets that will fall in open areas and thus not cause damage, the paper states.

The system has intercepted thousands of rockets so far and, according to Rafael Advanced Systems, its success rate is over 90%. The I-DOME is the mobile variant with all components on a single truck and C-DOME is the naval version for deployment on ships.

What are the limitations of the system?

The system has performed very well so far. However, the system can see limitations when it is overwhelmed with a barrage of projectiles. “The system has a ‘saturation point’. It is capable of engaging a certain (unpublished) number of targets at the same time, and no more. Additional rockets fired in a crowded salvo could succeed in breaching defences and cause damage,” Mr. Shapur says in the paper.

Several assessments suggest that Hamas is developing mitigating strategies including lowering the trajectories of the projectiles while also continuing to accumulate thousands of rockets with improved precision. According to Mr. Shapur, one of the possible limitations is the system’s inability to cope with very short range threats as estimates put the Iron Dome’s minimum interception range at 5-7 kilometres. Among the threats mentioned were mortars, whose range usually does not exceed several kilometres, he noted.

According to a November 2017 study by RAND Corporation, the system is built to intercept a certain of projectiles and can be overwhelmed by a more capable adversary.

According to the study by Elizabeth M. Bartels, the planning scenario for a war with “Hezbollah involves 1,000-1,500 rockets per day fired at Israeli population centres.” Taking North Korea as a context, the study puts estimates of forward-deployed conventional artillery would be “capable of firing 500,000 shells an hour for several hours, or firing tens-of-thousands of shells per day over an extended period.” “This rate of fire would easily overwhelm a variant of Iron Dome, which is currently being proposed as a solution,” it states.