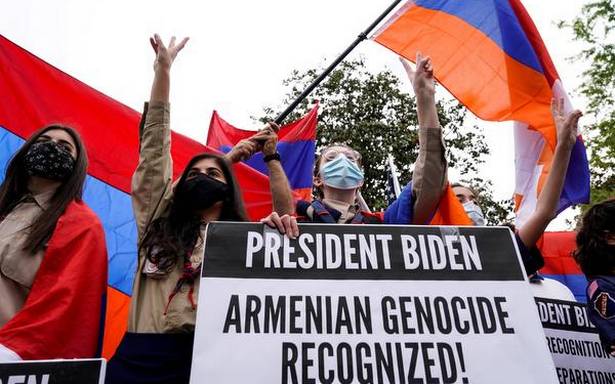 U.S. President Joe Biden’s recognition of the mass killings of Armenians by Ottoman Turks as an ‘act of genocide’ could infuriate Turkey.

The story so far: U.S. President Joe Biden on Saturday officially recognised the mass killings of Armenians by Ottoman Turks in 1915-16 as “an act of genocide”. Mr. Biden’s announcement on the Armenian Genocide Remembrance Day could infuriate Turkey, America’s NATO ally. Up to 1.5 million Armenians are estimated to have been killed in the early stage of the First World War within the territories of the Ottoman Empire. In 2019, the U.S. Congress passed resolutions calling the slaughter a genocide, but the Donald Trump administration stopped short of officially calling it so.

Was it a genocide?

According to Article II of the UN Convention on Genocide of December 1948, genocide has been described as carrying out acts intended “to destroy, in whole or in part, a national, ethnic, racial or religious group”. Raphael Lemkin, the Polish lawyer who coined the term “genocide” in 1943, had written that he had been influenced by atrocities against Armenians as well as the Nazi killings of Jews. Before the First World War broke out in 1914, there were 2 million Armenians in the Ottoman Empire. According to a study by the University of Minnesota’s Center for Holocaust and Genocide Studies, in 1922, four years after the War, the Armenian population in the region was about 387,800. This has led historians to believe that up to 1.5 million Armenians were killed during the course of the War. Armenians were largely living in the eastern fringes of the Empire. The Ottoman Turks unleashed Turkish and Kurdish militias upon them, killing and pillaging tens of thousands. Hundreds of thousands of Armenians were deported from eastern Anatolia (today’s Turkey) to concentration camps in the Syrian steppe. Most of the deaths occurred during this flight. “Rape and beating were commonplace. Those who were not killed at once were driven through mountains and deserts without food, drink or shelter. Hundreds of thousands of Armenians eventually succumbed or were killed,” writes historian David Fromkin in A Peace to End All Peace.

Why Armenians were targeted?

In a way, the Armenians were victims of the great power contests of the late 19th and early 20th centuries. When the Ottoman Empire was in decline on its fringes by the last quarter of the 19th century, Armenians were seen by the rulers in Constantinople as a fifth column. The resentment started building up after the Russo-Turkish war of 1877-78 in which the Turks lost territories. In the Treaty of Berlin, big powers dictated terms to the Ottomans, including putting pressure on Sultan Abdülhamid II to initiate reforms “in the provinces inhabited by Armenians, and to guarantee their security against the Circassians and Kurds.” The Sultan saw this as a sign of strengthening ties between the Armenians and other rival countries, especially Russia. Post the treaty, there were a series of attacks on Armenians by Turkish and Kurdish militias. In 1908, the Young Turks wrested control from the Sultan and promised to restore imperial glory. Under the Turks when the administration was run by the famous “Three Pashas” (Mehmed Talaat Pasha, the Grand Vizier or Prime Minister; Ismail Enver Pasha, the Minister of War; and Ahmed Cemal Pasha, the Minister of the Navy) , the empire became more and “Turkik” and persecution against the ethnic minorities picked up. In October 1914, Turkey joined the First World War on the side of Germany. In the Caucasus, they fought the Russians, their primary geopolitical rival. But the Ottomans suffered a catastrophic defeat in the Battle of Sarikamish by the Russians in January 1915.

The Turks blamed the defeat on Armenian “treachery”. First, Armenians in the Ottoman Army were executed. On April 24, the Ottoman government arrested about 250 Armenian intellectuals and community leaders. Most of them were later executed. (April 24 is the Remembrance Day). As the War was still waging, the Ottomans feared that Armenians in eastern Anatolia would join the Russians if they advanced into Ottoman territories. The Ottoman government passed legislation to deport anyone who is a security risk. Then they moved Armenians, including children, en masse to the Syrian Desert. That was a march of death.

Was anyone held responsible?

After the fall of the empire, many Ottoman officials, including a governor in Anatolia, were tried and executed for the atrocities committed against Armenians. But the Three Pashas fled the country and took refuge in Germany. They were sentenced to death in absentia. But Armenian resistance fighters under the banner of Operation Nemesis continued to hunt down Ottoman officials. On March 15, 1921, Talat Pasha, the Grand Vizier and the key architect of the atrocities, was assassinated on the street of Berlin by Armenian student Soghomon Tehlirian.

Turkey has acknowledged that atrocities were committed against Armenians, but denies it was a genocide (which comes with legal implications) and challenges the estimates that 1.5 million were killed. The Turkish Foreign Ministry has issued a strong statement to Mr. Biden’s announcement saying it doesn’t not have “a scholarly and legal basis, nor is it supported by any evidence”. “This statement …will open a deep wound that undermines our mutual trust and friendship. We call on the U.S. President to correct this grave mistake,” it read.