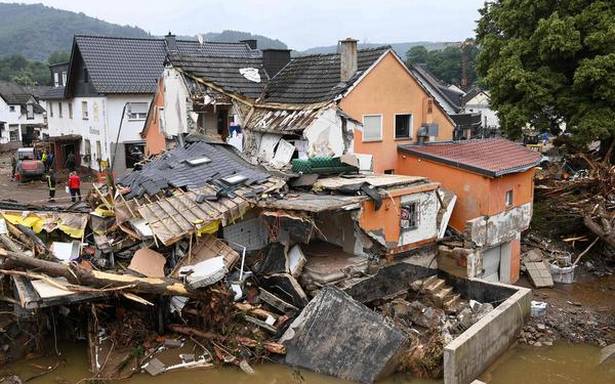 Flash floods hit southern Germany on Sunday, killing at least one person, turning roads into rivers and adding to the flooding devastation that has claimed the lives of more than 180 people across Europe in recent days.

Some vehicles were swept away and swathes of land were buried under mud as the Berchtesgadener Land district of Bavaria became the latest region to be hit by record rainfall and floods.

Hundreds of rescue workers were searching for survivors in the district, which borders Austria.

“We were not prepared for this,” said Berchtesgadener Land district administrator Bernhard Kern, adding that the situation had deteriorated “drastically” late on Saturday, leaving little time to for emergency services to act.

Sunday’s death brought Germany’s death toll to 157 in its worst natural disaster in almost six decades, and the European toll to 184.

The European floods, which began on Wednesday, have mainly hit the German states of Rhineland Palatinate, North Rhine-Westphalia as well as parts of Belgium. Entire communities have been cut off, without power or communications.

Scientists, which have long said that climate change will lead to heavier downpours, said it would still take several weeks to determining its role in these relentless rainfalls.

In Belgium, which will hold a national day of mourning on Tuesday, water levels were falling on Sunday and the clean-up operation was underway.

Emergency services officials in the Netherlands said the situation had somewhat stabilised in the southern part of Limburg province, where tens of thousands were evacuated in recent days, although the northern part was still on high alert.