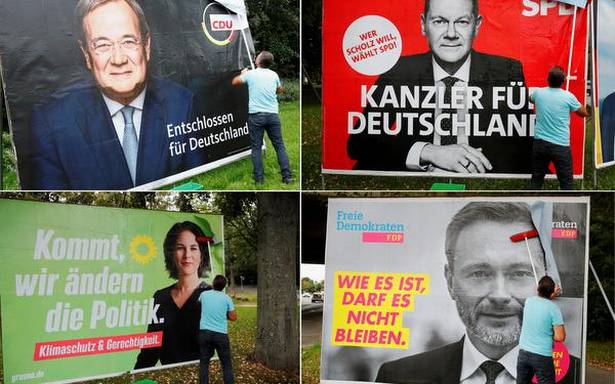 The issue of climate change has been central to the election campaign, but climate activists say the plans of the political parties aren’t far-reaching enough to limit global warming to 1.5 degrees Celsius

Two climate activists ended their hunger strike outside Parliament after a leading candidate for Chancellor of Germany agreed to a public meeting with them following the general election on September 26.

The decision came just hours after the hunger strikers had escalated their protest on September 25, refusing liquids in addition to food. They had demanded that Olaf Scholz, the candidate for the center-left Social Democrats, declare publicly that Germany faces a climate emergency.

The hunger strikers said Mr. Scholz called them on the afternoon of September 25, seven hours after they stopped taking liquids, and agreed to a public meeting within a month after the vote.

Mr. Scholz confirmed the agreement in a statement on Twitter, saying saving lives takes precedent. The candidate and his two rivals from the environmentalist Greens and the center-right Union bloc had turned down the hunger strikers’ initial demand for a meeting before the election.

The issue of climate change has been central to the election campaign, but climate activists say the plans of the political parties aren’t far-reaching enough to limit global warming to 1.5 degrees Celsius — the more ambitious limit in the 2015 Paris climate accord.

On September 24, tens of thousands of protesters, led by Swedish climate activist Greta Thunberg, had delivered that message in a rally outside the German Parliament, across the street from a tent camp the hunger strikers had pitched in a park in late August.

Hunger striker Henning Jeschke, who went without food for 27 days, said politicians had failed and called for continued peaceful resistance.

Mr. Jeschke was initially one of seven hunger strikers, but the others dropped out this week. He was joined on September 20 by another protester, Lena Bonasera, who also ended her fast on September 25.

Germany’s election is too close to call. Polls suggest the Social Democrats have a slight lead over the center-right Union bloc led by Armin Laschet.