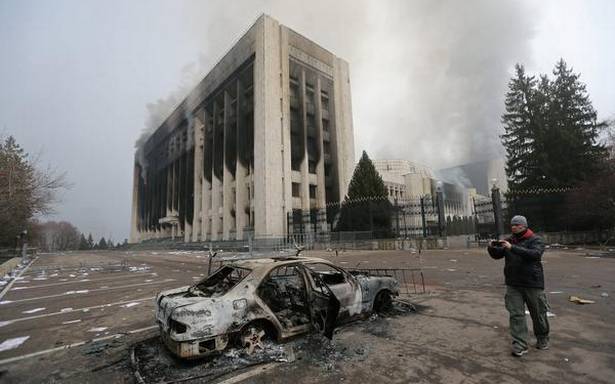 Long seen as one the most stable of the ex-Soviet republics of Central Asia, energy-rich Kazakhstan is facing its biggest crisis in decades.

Bursts of gunfire echoed through the streets of Kazakhstan’s largest city on January 6 as Moscow-led troops arrived to help quell mass unrest that left dozens dead and hundreds detained.

Fighting appeared to be continuing a day after protesters stormed several government buildings, with an AFP correspondent hearing regular eruptions of gunfire from the direction of a central square.

Burnt-out vehicles littered Almaty’s streets, several government buildings were in ruins and bullet casings were strewn over the territory of the presidential residence, which was stormed and looted by protesters on January 5.

"I didn’t know our people could be so terrifying," Samal, a 29-year-old nursery-school teacher, told AFP near the residence.

Long seen as one the most stable of the ex-Soviet republics of Central Asia, energy-rich Kazakhstan is facing its biggest crisis in decades after days of protests over rising fuel prices escalated into widespread unrest.

Armed protesters have fought running battles with government forces, with officials saying more than 350 security officers have been wounded and 13 killed, including two who had their heads cut off.

Within hours the alliance said the first troops had been sent — including Russian paratroopers and military units from the other CSTO members — in its first major joint action since its founding in 1999.

"Peacekeeping forces… were sent to the Republic of Kazakhstan for a limited time to stabilise and normalise the situation," the CSTO said in a statement, without specifying the number of troops involved.

The Russian Foreign Ministry said it saw the unrest as "an attempt inspired from outside to undermine the security and integrity" of Kazakhstan.

Footage released by the Russian Defence Ministry showed military transport planes being loaded with troops and armoured trucks before taking off from a snowy runway for Kazakhstan.

In the worst reported violence so far, police said dozens of people were killed in overnight battles with security forces at government buildings in Almaty.

The Almaty’s Mayor’s office, stormed and set ablaze by protesters on January 5, remained partially on fire a day later.

AFP saw people milling around the square opposite the building and later heard bursts of gunfire from its direction at around 5.30 p.m. local time (6 p.m. IST) and again an hour later.

The Interior Ministry said police had "moved forward to clear the streets" and detained about 2,000 people so far.

Officials said more than 1,000 people had been wounded in the unrest, with nearly 400 admitted to hospital and 62 in intensive care.

Protests spread across the nation of 19 million this week in outrage over a New Year increase in prices for liquid petroleum gas (LPG), which is widely used to fuel cars in the west of the country.

Thousands took to the streets in Almaty and in the western province of Mangystau, saying the price rise was unfair given oil and gas exporter Kazakhstan’s vast energy reserves.

The full picture of the chaos was unclear, with widespread disruptions to communications including mobile phone signals, the blocking of online messengers and hours-long internet shutdowns.

The protests are the biggest threat so far to the regime established by Kazakhstan’s founding president Nursultan Nazarbayev, who stepped down in 2019 and hand-picked Mr. Tokayev as his successor.

Mr. Tokayev tried to head off further unrest by announcing the resignation of the Cabinet early on January 5, but protests continued.

With protests escalating, authorities declared a nationwide state of emergency until January 19, with curfews, restrictions on movements and bans on mass gatherings.

The government made another concession on January 6, setting new fuel price limits for six months, saying "urgent" measures were needed "to stabilise the socio-economic situation".

Much of the anger appeared directed at Mr. Nazarbayev, who is 81 and had ruled Kazakhstan since 1989 before handing power to Tokayev.

Many protesters shouted "Old Man Out!" in reference to Mr. Nazarbayev and several witnesses confirmed to AFP that a statue of the ex-leader had been torn down in the southern city of Taldykorgan.

Britain and France on January 6 joined calls from the E.U., U.N. and Washington for restraint, with French Foreign Minister Jean-Yves Le Drian calling on both sides to "show moderation and open a dialogue".

Kazakhstan, which tolerates little real opposition, is a key ally of Russia but has also sought good ties with the West and China.

A major oil and gas exporter and one of the world’s biggest producers of uranium, the country has signed lucrative deals with international energy companies.

Critics say widespread corruption has meant little of that money reaching ordinary people, with average monthly salaries in the country of less than $600.