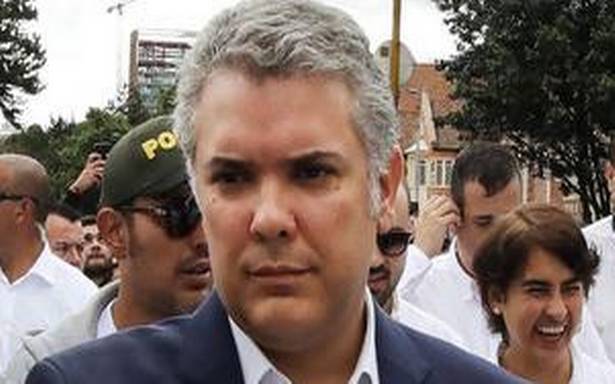 Colombian authorities have not confirmed who was behind that attack, but have said they suspect dissidents from the now-defunct Revolutionary Armed Forces of Colombia guerrillas or the rebel National Liberation Army.

Colombian President Iván Duque said Friday, June 25, 2021, that a helicopter carrying him and several senior officials came under fire in the southern Catatumbo region bordering Venezuela, in a rare instance of a direct attack on a presidential aircraft.

Mr. Duque said everyone on board the helicopter was safe, including himself, Defence Minister Diego Molano, Interior Minister Daniel Palacios and the governor of Norte de Santander state, Silvano Serrano. They had just attended an event titled “Peace with Legality, the Sustainable Catatumbo chapter.” “I want to inform the country that after fulfilling a commitment in Sardinata, in Catatumbo approaching the city of Cúcuta, the presidential helicopter was the victim of an attack,” the president said in a statement.

He said the helicopter’s equipment and capabilities “prevented something lethal from happening.” A video released by the presidency showed several bullet holes in the Colombian air force helicopter.

Duque did not provide the time of the attack or say who he believed carried it out, but several armed groups are known to operate in the area.

The president said the “cowardly” attack would not make him stop fighting drug trafficking, terrorism and organized crime. “The message is that Colombia is always strong in the face of crime and our institutions are above any threat,” he said.

Cúcuta, where the flight was headed, was already on a security alert after a June 14 car bomb attack at a military base that caused 36 injuries to both members of the military and civilians.

Colombian authorities have not confirmed who was behind that attack, but have said they suspect dissidents from the now-defunct Revolutionary Armed Forces of Colombia guerrillas or the rebel National Liberation Army. The latter has denied being behind the attack.

In 2018, when the conservative Duque began his presidency, the government said it was investigating “possible attacks” being planned against the president at a public event. The attacks never materialised.