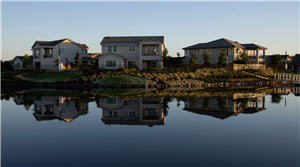 Tired of being cooped up, eager to take advantage of low interest rates and increasingly willing to move two or more hours from the urban core, buyers have propelled new-home construction to its highest level since 2006. They had a down payment. They were prequalified for a mortgage. They were willing to move almost an hour’s drive eastward. But the number that really mattered was “32.”

If a salesperson standing in a model unit plucked a bingo ball with that number from one of several buckets arrayed on a marble kitchen island, Jezreleen and Eric Namayan would get to pay $662,000 for a five-bedroom home in River Islands, a master planned community built around 13 man-made lakes in California’s Central Valley. If not, the home would go to one of the dozens of other prospective buyers who had lined up next to them on a Zoom webcast of the drawing. The Namayans would remain in a two-bedroom condominium with two teenagers while struggling to penetrate the white-hot post-pandemic housing market.

“When they started getting closer to our lot, I almost felt like I was outside looking at myself,” Jezreleen Namayan said.

Tired of being cooped up, eager to take advantage of low interest rates and increasingly willing to move two or more hours from the urban core, buyers have propelled new-home construction to its highest level since 2006. That was the year when the mid-2000s housing bubble started deflating on its way to what would become the financial crisis and Great Recession.

After a prolonged period of anemic sales since the housing bust, homebuilders now risk losing business because they can’t supply enough inventory. Home prices have shot up 11.3% over the past year, according to CoreLogic, keeping many people out of the market. At the same time, the cost of labor and raw materials — in particular the cost of lumber, which has more than doubled over the past year — is spiraling upward, pushing prices higher still.

Just as notable as the level of new construction is where it is taking place. From the mountains of central Pennsylvania to the one-stoplight towns beyond Houston’s endless expanse to California’s San Joaquin Valley, developers are racing to build homes in areas that buyers used to judge beyond the outer limits of an acceptable commute. 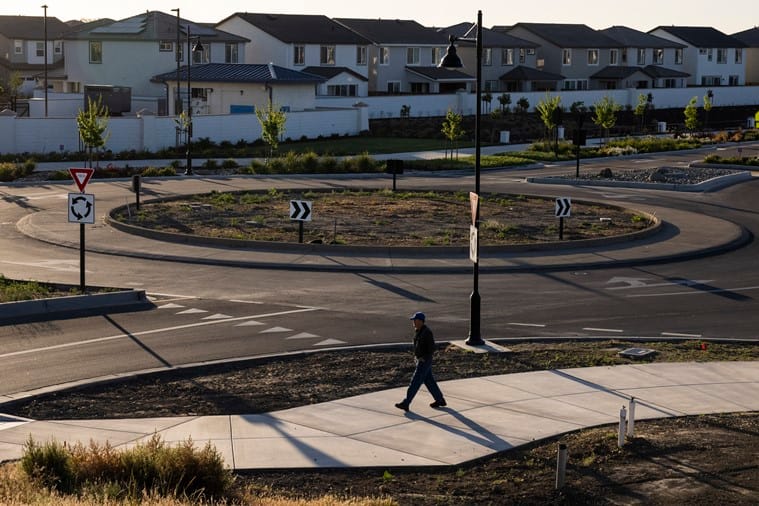 Every housing boom redefines where the city ends. Fields beyond the old suburbs become the site of the new exurbs until the next development wave pushes farther still. Over the past decade, however, as high-paying jobs increasingly concentrated in a handful of big cities, workers from across the income spectrum spent a growing share of their paychecks to live in downtown neighborhoods and commuter-friendly areas.

There was plenty of affordable land on the urban fringes and in smaller cities, but homebuilders had trouble finding buyers there. The U.S. housing market was held back by a fundamental mismatch: The places where people wanted to live were the places where it was the hardest for developers to build.

Now, after a year of lockdowns and a push to continue working from home even as the pandemic wanes, the preference for closer-in living has weakened. This has helped unleash a wave of home building.

Over the past year, new-home construction in small cities and suburban areas rose 15%, compared with less than 10% in big cities, according to data from the National Association of Home Builders. Would-be homeowners are flocking to the new farthest exurbs, where homebuilders can meet demand — and together they are again stretching the boundaries of a city and its surrounding sprawl.

“People can move to where it’s more affordable,” said John Burns, CEO of John Burns Real Estate Consulting. “This is a permanent game-changer in the housing market.”

U.S. builders are on a pace to start construction on 1.1 million single-family homes this year, the most since 2006. That is still well below the 2005 peak of 1.7 million homes, but double the sub-500,000 rate in the aftermath of the crash.

Some of this was a natural recalibration: After overbuilding during the housing bubble, then suffering through the Great Recession, developers became more cautious. But the lag was also the result of the extreme difficulty of building homes in the cities where demand was strongest. By the end of 2020, the United States had a supply shortage of 3.8 million homes, according to an estimate from Freddie Mac, the government mortgage finance company. Much of that shortage is in “starter homes” accessible to first-time buyers.

Growth on the urban periphery, while a boon for housing affordability, comes with environmental costs, chewing up farmland and perpetuating the car-centric lifestyles that are a significant contributor to climate change. California, for instance, has a goal to cut greenhouse gas emissions 40% below 1990 levels by 2030 but has found it increasingly out of reach as home prices have pushed workers farther from the urban core, where they drive more.

In theory, if more people work from home, even in a hybrid capacity, it would offset some of those emissions by cutting down daily commutes. But the farther people get from the urban density and public transportation, the more dependent they become on cars even for short trips.

River Islands, the development where the Namayans hoped to live, is in Lathrop, California, which has a population of 25,000. It sits about a half-hour beyond Altamont Pass, whose rolling hills and windmills mark the border between Alameda and San Joaquin counties. Though technically outside the Bay Area region, Lathrop’s farms and open fields have been steadily supplanted by warehouses and subdivisions as it and nearby cities have become bedroom communities for priced-out workers who commute to the Silicon Valley and San Francisco. In Livermore, on the eastern side of Alameda County, the typical home value is nearing $1 million, according to Zillow. That falls to $500,000 to $600,000 over the hill in places like Tracy, Manteca and Lathrop. The catch, of course, is that many residents endure draining, multihour commutes.

The pandemic may have upended that economic order in California and elsewhere. Thousands of families that could afford to do so fled cities last spring, and while some will return, others will not — particularly if they are able to continue to work remotely at least part of the time. One recent study estimated that after the pandemic, one-fifth of workdays would be “supplied remotely” — down from half during the height of the pandemic but far above the 5% before it.

If those trends hold, it will make it easier for many workers to live not just in farther-out towns like Lathrop but to abandon high-cost regions like the Bay Area altogether. Mid-size cities that for years have tried — usually in vain — to recruit large employers through tax breaks can now attract workers directly.

To some extent, the pandemic accelerated a shift that was already taking place. When the housing bubble burst, members of the millennial generation were in their teens and 20s. Now the oldest of them are turning 40, and about half are married. They are hitting the milestones when Americans have traditionally moved to the suburbs.

Millennial homeownership has crept up in recent years, but it lags well behind previous generations at the same stage of life. Surveys consistently find that young people still want to buy homes but have struggled to do so. The pandemic may have freed many white-collar millennials to look outside the tightest markets.

Before it became a suburb, Lathrop wanted to be Disneyland. In the late 1980s, as part of a long-term growth plan, the local government’s hope was to turn the land around River Islands — then a mass of row crops — into a complex of theme parks that would draw tourists from the urban centers over the hill.

As the theme park boom fizzled in the 1990s, the vision shifted to what would ultimately become an 11,000-home master-planned community with a business park. River Islands Development — which develops land and basic infrastructure, then sells lots to homebuilders — spent two decades planning and permitting, only to see the housing market crash just when it was ready to start selling.

“We’d get an offer, then someone would call us back and say, ‘I’m sorry, it’s now this much less,’” said Susan Dell’Osso, president of River Islands Development. “And it kept going down, down, down, and just kept going down for the next eight years.”

When the development started selling lots in 2014, close to half of the new buyers lived in the Central Valley, Dell’Osso said. The average home went for about $550,000 and the development sold about 300 lots a year. Last year, it sold 643. The average River Islands home now goes for $650,000, and about three-quarters of the buyers come from the Bay Area. They are people like Jamie and Sebastian Dela Cruz, newlyweds who a year ago were paying $2,400 a month for a one-bedroom apartment in Fremont, California. They hoped for more space eventually, but the area’s $1.3 million median home value made that unrealistic. A desire to be close to work kept them in the Bay Area. Jamie Dela Cruz took public transit to her marketing job at a San Francisco hotel; Sebastian Dela Cruz had a reverse commute to his job as an operations engineer at a software company in Pleasanton.

“It was pretty sad looking at those numbers,” Jamie Dela Cruz said of local home prices. “The Bay Area demands a lifestyle that to me wasn’t what I envisioned.”

Then Jamie Dela Cruz was laid off as tourism cratered with the pandemic, and Sebastian Dela Cruz started working from home. Freed from daily commuting, they were open to leaving the Bay Area for the Central Valley. The Dela Cruzes moved into their new home in January, about the same time the Namayans entered the lottery for a chance to be their neighbors.

The Namayans live with their two sons in a two-bedroom condo in Livermore. After the kitchen table became a classroom and the garage became a gym for Eric Namayan, a personal trainer, to do sessions by video, their desire for more space began to feel like a necessity, and a long commute to the Bay Area seemed like less of a problem.

“We have no side yard, no backyard, no nothing,” Jezreleen Namayan said.

By then River Islands was hot. They got prequalified to buy a five-bedroom model by Kiper Homes but were among more than 1,000 people on the interest list. While some builders now allow bidding wars — an unusual practice in the new-home market, where buyers are typically asked to pay what is essentially a sticker price — Kiper Homes has been conducting lotteries to mete out demand. Unable to hold in-person events during the pandemic, the firm moved to live drawings on Zoom.

On the morning of the drawing, the Namayan parents went to their bedroom and told the kids to wait downstairs. They logged in from an iPad on Jezreleen Namayan’s desk.

Their odds were long, but had improved considerably. The 1,000-plus interest list had been whittled to about 70 families competing for six homes. As the numbered bingo balls were put in six buckets, each representing an empty lot where a home would be built, Jezreleen Namayan took a tally and found that 17 families were vying for the place she and her husband wanted. The salesperson put a hand in the bucket, swirled around and emerged with the number 32.

“I put my head on Jez’s shoulder, and we just started crying,’” Eric Namayan said.