Asma’s journey epitomized everything about this entire effort. Her father was murdered for assisting the US. She was hit by tear gas. Throughout every phase of this, it was a fight and a struggle, said Hanna Tripp, a policy adviser with a veterans group who helped rescue the girl. 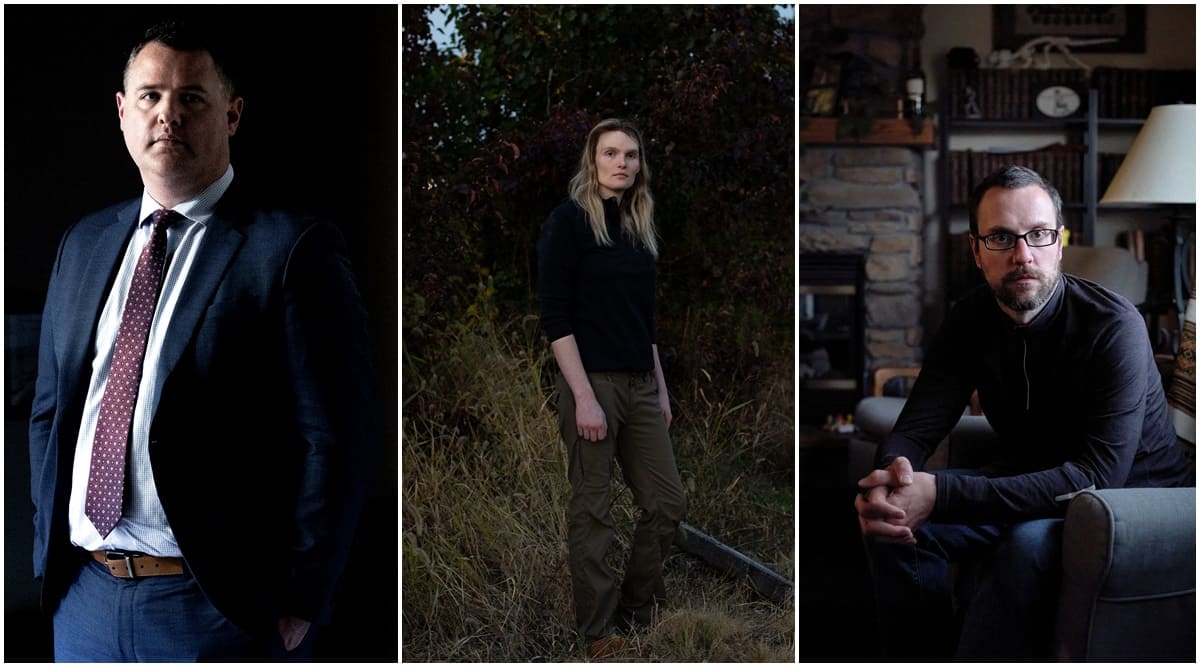 Nabila had been fasting in the hope that God would get her family through the gates of Hamid Karzai International Airport. So, when a tear gas canister thrown by US forces trying to disperse the crowd hit her 8-year-old daughter Asma, she was too weak to help.

Screaming in pain, with her face mask on fire, the little girl fell to the ground. As smoke spread, Nabila fell too, and was separated from her daughter in the mass of panicked people.

And in that moment, everything seemed lost for Asma, whose father had been killed by the Taliban for the crime of working for the US military. But soon after the child was injured, a remarkable intervention involving secret US military commandos, a CIA base in Kabul and three strangers in the United States began to take shape.

In the years to come, there will be stories about the people who made it out of Afghanistan in the frenetic days before the last US soldier boarded a C-17 plane at the end of the two-decade war. There will be stories about the all-girls robotics team that was flown to Qatar and the US-trained journalists who huddled outside the Abbey Gate at the airport before Marines got them through.

In the final two weeks, the United States evacuated 124,000 people, most of them Afghans. As they arrive at US military bases, each brings a personal story.

Slight and with a head full of long, black hair always pulled into a ponytail, Asma was born, in Nangarhar province, to a mother who was still grieving her husband, murdered five months before. The Taliban had threatened Asma’s father for working with the Americans.

Frightened, he quit his job and went to work for the United Nations. But the Taliban killed him anyway.

Nabila raised Asma and her three other children — another daughter and two sons — in the hope that one day she could get them to the United States, she said in an interview with The New York Times.

Asma’s cousin Hawa was her best friend; the two little girls grew up together, played together. They loved drawing. They also loved watching, over and over, “Baby’s Day Out,” a 1994 romp about a toddler who shakes off three bungling kidnappers and leads them on a chase through downtown Chicago.

Asma told her family she wanted to be a doctor. They asked her what kind. A children’s doctor?

Not just any doctor, Asma told them, pointing an index finger in the air, as she often did to make a point. “I want to be the head doctor.”

The death of Asma’s father meant that the bureaucratic hurdles for the family to come to the United States were infinitely higher, since there was no primary applicant. But as long as US troops remained in the country, there seemed to be no huge impetus to leave. A few relatives, including Yousuf, Asma’s uncle — whom, like others in the family, the Times is identifying by one name for safety reasons — made it to the United States. But Asma’s family remained in Afghanistan.

Then Kabul fell to the Taliban, and suddenly what was once an aspiration for a better life became a matter of life and death. Nabila fled with her children to her sister’s house in Kabul, and then, at 6:30 a.m. Aug. 19, the family got into a taxi and went to the airport. Each child had a backpack with one change of clothes. Nabila had her husband’s work documents and a handful of family photos, including one of her engagement. That was it. No clear plastic bag of travel-size liquids. No favorite book. No suitcases.

The taxi let the family off near the Abbey Gate, where thousands of people had massed. Nabila knew that perhaps this was not the best day to be fasting, as she would most likely be outside for hours, if not longer. But then again, this was perhaps the perfect day to be fasting. “I wanted requital” from God, she recalled.

About 12 hours later, with the sun gone from the sky and the stars becoming clear, the crowd at the gate surged, pushing the family closer to the concertina wire. Troops threw out tear gas canisters, and Asma was hit in the face. The hem of Nabila’s dress caught fire briefly as they both went down.

Asma’s brother Israr rushed to his mother and sister and poured water on Asma’s face. He struggled to breathe amid the smoke. His sister’s mask was stuck to her face in a ghastly melding of burned material and skin.

Whimpering, the girl stood up. She could barely talk but managed to walk with her family away from the gate. Her brother, his fingers shaking, called a cousin, who picked them up and drove to a drugstore to buy burn cream before taking them back to the home of Nabila’s sister.

But the cream was no match for the child’s second-degree burns, which ravaged half of her face.

Seven thousand miles away in the United States, Nabila’s brother was home when he received a text containing two photos of Asma’s face.

Horrified, Yousuf forwarded the photos to one of the groups of veterans, activists and other citizens who had started Slack channels in the days after the fall of Kabul to help vulnerable Afghans get out of the country. These people came from all walks of life, some without any direct connection to Afghanistan. Somehow, the two pictures of Asma ended up in the hands of an anthropology professor, a former Air Force gunner turned policy adviser and a former Marine who worked as a Defense Department lawyer.

On the morning of August 24, Lee Drake, an adjunct anthropology professor at the University of New Mexico who had been working to help Afghan refugees, stared at the photos of Asma. Her hair was pulled back into her usual simple ponytail, and she wore a green shirt with a wide collar, an effort to keep her clothes from irritating her burns, which stretched down her neck and onto her chest. One eye was swollen shut; her eyebrow was singed off. Half of her face was raw. The photo accompanied a single-page letter, which, in four stark paragraphs, recounted the bare facts of Asma’s life.

The letter ended: “Taliban are seeking for those whom member of family served for US government and torturing them, so please help Asma family in such stressful situation.”

The letter and photos, Drake said, “just broke me.”

He described Asma’s plight in a Slack group, and the first person to respond was Jason Greene, a former Marine who had served in Iraq and is now a Defense Department lawyer. “Asma reminded me of a girl who died in the battle of Ramadi, and I’ve been carrying the guilt of not being able to save innocent civilians like her for a long time,” he said. “So I sort of fixated on Asma.”

Greene called his contacts in the Joint Special Operations Command. Twice, operatives tried to get to the family in Kabul, and twice those missions were called off in the chaos. Twice more, the family tried to go back to the airport without assistance, and twice they turned back because of gunfire.

Then, early August 26, Israr received a text. Come to the Gas Group square in Kabul, it said, for a chance to be taken to the airport. It was barely dawn when a relative drove the family to the meeting point. There, they sat for two terrifying hours.

Around 8 am, a white armored pickup truck pulled up. The driver, its sole occupant, wore a black shirt and cargo pants. The family didn’t know it, but he was with special forces, operating out of Eagle Base, a heavily fortified secret CIA complex just outside Kabul.

Nabila nodded. “Get in the back,” he said.

They climbed in, the children clutching their backpacks, and the small truck wound its way out of Kabul to the 10-foot walls that surrounded Eagle Base. Asma’s family would be among the last Afghans granted entry into the CIA outpost; US forces would, in the next days, blow it up as they left Afghanistan.

The medics whisked Asma to the clinic on the base.

“They took her away,” Nabila recalled. She had been terrified for so long, but in that moment, Nabila said she began to feel “an ease.”

The staff at Eagle Base painstakingly cleaned Asma’s wounds, then removed the thickened and infected skin.

“And then,” Nabila said, “they brought her back and said, ‘You’re going to America.’ ”

That evening, commandos put the family on a helicopter and flew them to the airport.

But even there, the family was not assured safe passage.

With the terrorism threat level high, the Biden administration had made it clear that even though the United States would try to evacuate as many vulnerable Afghans as possible, being inside the airport gates was no guarantee that they would get out.

“We reached out to the Canadians, who said they could get them out,” recalled Hanna Tripp, a policy adviser with a veterans group and a former Air Force gunner. But later Israr texted that they were still sitting in front of a bus on the tarmac. And his phone’s battery was running out.

The last message Tripp received from Israr was both hopeful and ominous. People in uniforms, he said, were escorting them somewhere.

Those people, it turned out, were US Marines, who put Asma and her family on a C-17 plane to Qatar.

Asma’s journey “epitomized everything about this entire effort. Her father was murdered for assisting the US,” Tripp said. “She was hit by tear gas. Throughout every phase of this, it was a fight and a struggle.”

But Asma got out. Now, her burns are healing, and she and her family are at Holloman Air Force Base in New Mexico, where she is reading everything she can get her hands on and dreaming of the America that awaits. Interviewed with her mother and brother, she looks and sounds like a happy 8-year old girl, full of life and plans.

Once the bureaucratic hoops are cleared, there are people who say they can’t wait to meet her.

“This girl is family to us now, whether she likes it or not,” said Tripp, referring to herself, Drake and Greene. “She’s got a large dysfunctional family waiting to meet her.”