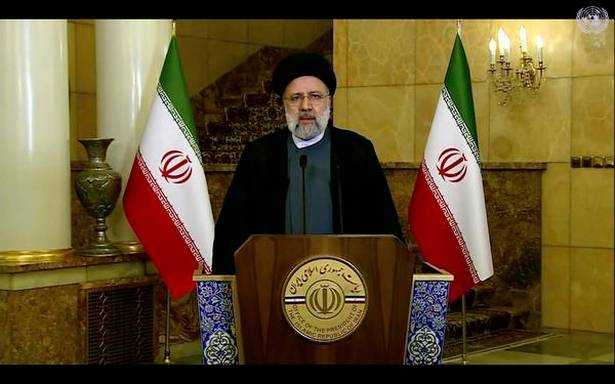 Iran’s new President slammed U.S. sanctions imposed on his nation as a mechanism of war, using his first UN address since his swearing-in to forcefully call out Washington’s policies in the region and the growing political schism within America.

President Ebrahim Raisi on Tuesday delivered a far more critical and blunt take on American foreign policy than his moderate predecessor, Hassan Rouhani, had done in previous speeches to the UN General Assembly.

Mr. Raisi, who was sworn in last month after an election, is a conservative cleric and former judiciary chief seen as close to Iran’s Supreme Leader, Ayatollah Ali Khamenei.

His speech espoused Iran’s Islamic political identity and where the Shiite-led nation sees its place in the world, despite crushing U.S. sanctions that have hurt its economy and ordinary Iranians.

“Sanctions are the US’ new way of war with the nations of the world,” Mr. Raisi said, adding that such economic punishment during the time of the COVID-19 pandemic amounts to “crimes against humanity.” U.S. sanctions, while allowing for humanitarian aid, have made international purchases of medicine and equipment much more difficult. Iran has endured multiple waves of the coronavirus, with nearly 1,18,000 deaths recorded — the highest in the region.

In taking aim at the United States, Mr. Raisi also referenced the shocking January 6th insurrection on Capitol Hill by supporters of then-President Donald Trump, and the horrific scenes at Kabul airport last month as desperate Afghans plunged to their deaths after clinging to a US aircraft evacuating people.

“From the Capitol to Kabul, one clear message was sent to the world: the US’ hegemonic system has no credibility, whether inside or outside the country,” Mr. Raisi said.

The Iranian President said “the project of imposing Westernized identity” had failed, and added erroneously that “today, the US does not get to exit Iraq and Afghanistan but is expelled.” The U.S. military withdrew from Afghanistan amid a hasty and chaotic airlift of more than 1,00,000 Afghans and foreigners, and has largely withdrawn from Iraq. Iran shares long borders with Afghanistan to its east and Iraq to its west, where Shiite militias are powerful.

The perseverance of nations, he said, is stronger than the power of superpowers. In a dig at the political slogans used by Mr. Trump and his successor President Joe Biden, Mr. Raisi said: “Today, the world doesn’t care about “America First” or “America is Back.” Speaking remotely via video from Tehran, Mr. Raisi wore a black turban on his head that identifies him in the Shiite tradition as a direct descendant of the Prophet Muhammad. He praised Iran’s Islamic Revolution of 1979 as the fulfilment of “religious democracy” and linked the growth of “indigenous terrorism in the West” to a decline in spirituality.

Despite the criticism aimed at Washington, Mr. Raisi appeared not to rule out a return to the negotiating table for the nuclear accord, saying Iran considers talks useful if their ultimate outcome is the lifting of all sanctions. Still, he stated: “We don’t trust the promises made by the US government.” Tensions peaked last year between the U.S. and Iran after the Trump administration’s assassination of powerful field commander, Qassim Soleimani, and a top Iraqi Shiite militia leader by a U.S. drone strike in Iraq. Raisi mentioned the men in his speech, saying they helped fight Sunni extremists of the Islamic State Group from “becoming neighbours of Europe”.

Mr. Biden has made clear he wants to salvage the nuclear deal with Iran that Mr. Trump withdrew the U.S. from, but indirect talks between Washington and Tehran in Vienna have stalled as tensions in the Persian Gulf persist.

“The United States remains committed to preventing Iran from gaining a nuclear weapon,” Biden said in his own UN speech, delivered in person earlier Tuesday.

When asked about Iran, White House press secretary Jen Psaki told reporters aboard Air Force One that “the door remains open to diplomacy” and that US negotiators believe the best path forward is to pursue talks, but she had no update on when the parties might meet again.

Mr. Raisi insisted that atomic weapons have no place in Iran’s defense doctrine and deterrence policy.