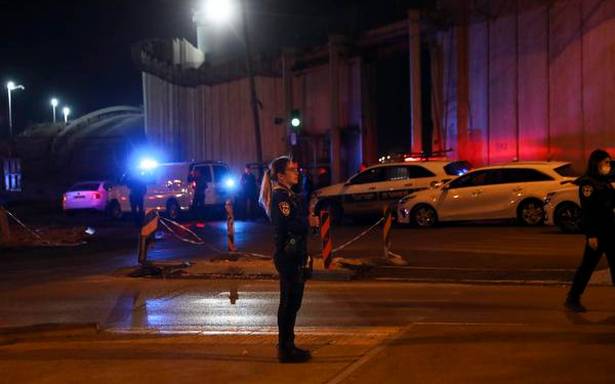 Palestinians have carried out dozens of stabbing, shooting and vehicular attacks in recent years, but they say some of the alleged car-rammings were accidents and accuse Israel of using excessive force.

A Palestinian driver struck and moderately wounded a member of Israel’s paramilitary Border Police at a major checkpoint north of Jerusalem overnight, the police said on Thursday.

They said officers fired on the vehicle, causing it to crash into a wall, and arrested the suspect, a 22-year-old from the town of Qalqilya in the occupied West Bank. The police said it was a car-ramming attack.

The Border Police had been removing unauthorised structures near the Qalandia checkpoint, on the main road between the West Bank city of Ramallah, where the Palestinian Authority is headquartered, and Jerusalem.

Palestinians have carried out dozens of stabbing, shooting and vehicular attacks in recent years, but Palestinians and rights groups say some of the alleged car-rammings were accidents and accuse Israel of using excessive force.

In a separate incident, a Jewish settler attacked an Israeli military officer and a soldier with pepper spray near a settlement outpost in the occupied West Bank on Wednesday, the latest in a series of recent attacks by settlers on Israeli security forces and Palestinians.

The military said the two soldiers received medical treatment at the scene, without elaborating. It declined to say whether anyone was arrested in the attack, referring questions to police, who did not immediately respond to a request for comment.

Hard-line settlers have clashed with Israeli troops and vandalised Palestinian property in recent days in what are known as “price-tag” attacks in response to perceived efforts by Israeli authorities to restrict settlement expansion.

Most of the nearly 5,00,000 Israeli settlers in the West Bank live in authorised settlements that resemble small towns and suburbs, but more radical settlers have set up dozens of outposts that are illegal even under Israeli law. The Palestinians and most of the international community view all settlements as illegal and an obstacle to a two-state solution to the conflict.

Lt. Gen. Aviv Kohavi, the military chief of staff, condemned the recent settler attacks, saying “criminal behavior against IDF soldiers on the part of civilians is intolerable and requires quick enforcement to the full extent of the law.” The more than 2.5 million Palestinians in the occupied West Bank live under Israeli military rule, with the Palestinian Authority having limited autonomy in cities and towns. The settlers have Israeli citizenship and are subject to Israel’s civilian justice system.