According to the survey by Datafolha, 54% of Brazilians support a proposed move by the country's lower house to open impeachment proceedings against Bolsonaro, while 42% oppose it. For the first time, a majority of Brazilians support impeaching President Jair Bolsonaro, according to a poll released on Saturday, as serious graft allegations related to vaccine procurement hit the right-wing leader’s already battered image.

According to the survey by Datafolha, 54% of Brazilians support a proposed move by the country’s lower house to open impeachment proceedings against Bolsonaro, while 42% oppose it.

In the last Datafolha survey on the issue, released in May, supporters and opponents of impeachment were essentially tied.

In a separate Datafolha poll, released on Thursday, 51% of Brazilians said they disapproved of Bolsonaro, the highest figure since he took office in January 2019.

In recent weeks, Brasilia has been rocked by allegations that federal officials solicited bribes to fast-track and overpay for the Covaxin vaccine developed by India’s Bharat Biotech. 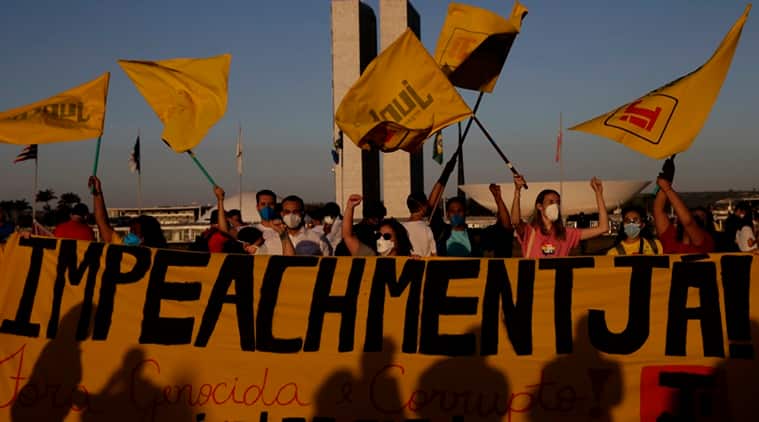 A Health Ministry official and a congressman have said they shared their concerns about the Covaxin deal with Bolsonaro, but that no action appeared to have been taken.

Last week, a Supreme Court judge authorized an investigation into the president for dereliction of duty.

In a radio interview on Saturday, Bolsonaro said he had taken measures after the officials shared their concerns about the Covaxin deal, but he did not elaborate further.

“I meet with 100 people per month about the most varied topics imaginable,” he told Radio Gaucha in southern Brazil. “I took measures in this case.”

In addition to the vaccine scandal, uncovered amid an ongoing Senate investigation, a pair of deadly coronavirus waves this year have chipped away at the popularity of the former army captain who has consistently downplayed the pandemic’s severity and sown doubts about the safety of vaccines.

Datafolha surveyed 2,074 Brazilians face-to-face on July 7 and 8. The poll has a margin of error of 2 percentage points, meaning results could vary by that much either way.