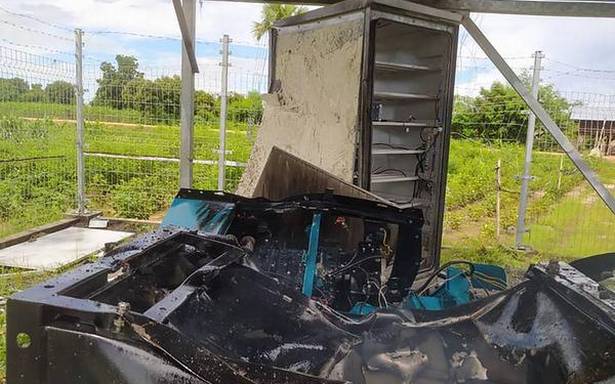 Post-coup Myanmar is no stranger to internet blackouts, with the junta imposing one in the early hours of February 1 as soldiers arrested Ms. Suu Kyi and other top politicians.

Myanmar’s junta has denied suspending the internet in conflict-wracked regions, blaming a recent spate of data blackouts on anti-coup protesters who had destroyed military-owned communications towers.

The Southeast Asian country has been in chaos since the military toppled Aung San Suu Kyi’s government in February, triggering huge democracy protests that security forces have sought to quell in bloody crackdowns.

Some in the anti-coup movement formed local "people’s defence forces" in their townships to fight back, and in recent weeks destroyed several communications towers belonging to military-owned Mytel in western Chin state.

Reports of an internet and data blackout — particularly in regions where local defence forces and the military are locked in conflict — emerged soon after.

The junta’s foreign ministry on Saturday denied that the State Administration Council — as the military regime dubs itself — was responsible.

"In fact, the recent internet connections were disrupted due to the terrorist acts such as destroying of communication towers by terrorist groups," the ministry said in a statement.

"The Ministry urged some foreign missions in Yangon to thoroughly verify information before making statements."

Post-coup Myanmar is no stranger to internet blackouts, with the junta imposing one in the early hours of February 1 as soldiers arrested Ms. Suu Kyi and other top politicians from her National League for Democracy party.

A nationwide mobile data blackout was also imposed during the night time hours in the weeks following the power grab.

On Sunday, anti-coup fighters told AFP that telecommunications services in Pinlebu, Kawlin and Wuntho townships in northern Sagaing region — where clashes with the military have been fierce —were down since the early hours of the day.

"We could not use internet and phone" since 2:00 am, an anti-coup fighter who had fled Kawlin told AFP, adding that security forces were flooding into the area.

"The people are worried that the junta would launch a big operation," he said, speaking on condition of anonymity.

Another local defence force member said they could no longer reach their fighters in Pinlebu.

The stepped-up attacks from anti-coup fighters came after the self-proclaimed "National Unity Government", made up mostly of lawmakers from Ms. Suu Kyi’s ousted party, urged citizens to target military assets in their areas.

More than 1,100 civilians have been killed and some 8,000 arrested since the coup, according to local observers.

The junta has defended its power grab by alleging massive fraud during elections in late 2020 which Ms. Suu Kyi’s party had won by a landslide.