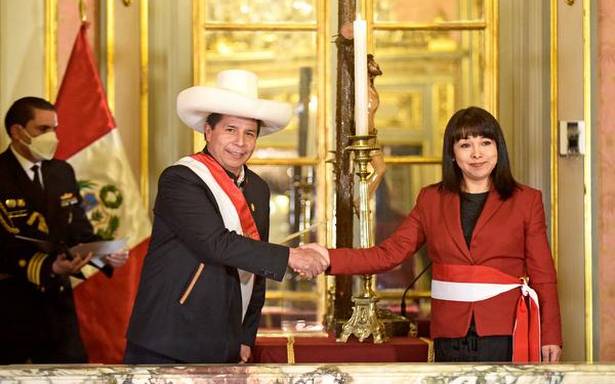 Ms. Vasquez, a former head of Congress, is the second person to become Prime Minister under President Pedro Castillo, who has been in the job just two months

Peru’s new Prime Minister Mirtha Vasquez said redrafting the country’s pro-market constitution is not currently a priority for the government, despite it having been a key campaign promise.

"This government is not proposing [to change the constitution] and won’t propose that overnight," Ms. Vasquez said during one of her first interviews late on October 8 with state-owned TV Peru. "Right now, what matters is facing the pandemic…and especially generating economic stability."

Ms. Vasquez, a former head of Congress, is the second person to become Prime Minister under President Pedro Castillo, who has been in the job just two months.

She is a leftist politician, but considered more moderate than her predecessor who resigned earlier this week. Ms. Vasquez also does not belong to the same party as President Castillo, the Marxist-Leninist Free Peru Party.

Her remarks will further calm investors who have been spooked by President Castilllo’s campaign promise to redraft Peru’s pro-market constitution.

They also show President Castillo’s administration moving away from the more far-left ideas espoused by the Free Peru party, which holds changing the constitution as perhaps its most important proposal.

Ms. Vasquez is a lawyer and has represented indigenous communities in conflict with big mining companies, including a landmark case against Newmont Mining Corp’s Yanacocha gold mine.

Still, she said President Castillo’s government would support mining, a key source of tax revenue for the country.

"One of our most important bets is to take advantage of the resources and carry out an activity like mining," she said.