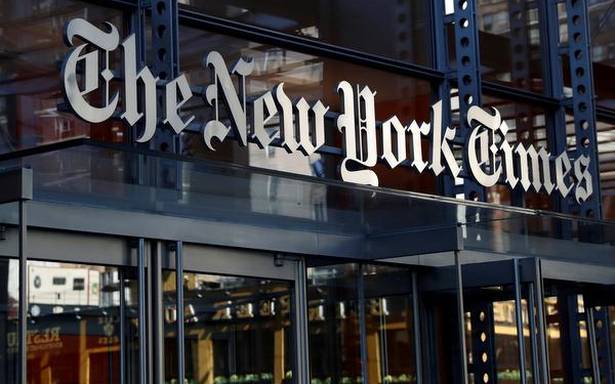 Project Veritas bills itself as a watchdog, often of media. It’s known for using hidden cameras and hiding identities to try to ensnare journalists in embarrassing conversations and to reveal supposed liberal bias.

A New York judge has upheld an order preventing The New York Times from publishing documents between conservative group Project Veritas and its lawyer and ruled that the newspaper must immediately relinquish confidential legal memos it obtained.

The decision on Thursday by State Supreme Court Justice Charles D. Wood in Westchester County, released Friday, comes in a defamation lawsuit Project Veritas filed against the Times in 2020.

Months after the lawsuit was filed, the newspaper reported that the U.S. Justice Department was investigating Project Veritas in connection with the theft of a diary belonging to Ashley Biden, the president’s daughter. In that story, the Times quoted the memos, leading Project Veritas to accuse the newspaper of violating attorney-client privilege.

Justice Wood upheld his earlier order preventing the Times from further publishing the memos, and also ruled that the newspaper must turn over physical copies of the documents and destroy electronic versions.

The newspaper reported it would appeal the ruling and seek a stay in the meantime. Publisher A.G. Sulzberger decried the ruling as an attack of press freedoms and alarming for “anyone concerned about the dangers of government overreach into what the public can and cannot know.” He also said it risked exposing sources.

“In defiance of law settled in the Pentagon Papers case, this judge has barred The Times from publishing information about a prominent and influential organization that was obtained legally in the ordinary course of reporting,” Mr. Sulzberger said in a statement reported by the Times that also asserted there was no precedent for Justice Wood’s decision.

Project Veritas bills itself as a watchdog, often of media. It’s known for using hidden cameras and hiding identities to try to ensnare journalists in embarrassing conversations and to reveal supposed liberal bias.

In a statement Friday, Project Veritas lawyer Elizabeth Locke hailed the ruling as “a victory for the First Amendment for all journalists and affirms the sanctity of the attorney-client relationship.”

“The New York Times has long forgotten the meaning of the journalism it claims to espouse, and has instead become a vehicle for the prosecution of a partisan political agenda,” Locke said. “Today’s ruling affirms that the New York Times’ behavior was irregular and outside the boundaries of law.”

Justice Wood also pushed back against the idea that the order endangered press freedoms, writing in his ruling that “steadfast fidelity to, and vigilance in protecting First Amendment freedoms” can’t infringe on the fundamental rights of attorney-client privilege or privacy.

He wrote that while aspects of Project Veritas, including its journalistic methods, may be of public interest, its attorney-client communications are not.

News organizations, including The Associated Press, supported the Times and asked the court not to impose what they called an unconstitutional prior restraint on speech in a friend of the court brief filed last month by the Reporters Committee for Freedom of the Press.